Across the plains of North Dakota, thousands of people have gathered with the Standing Rock Sioux tribe in recent months to protest construction of a 1,172-mile oil pipeline.

What began as a legal battle to halt construction has grown into an international movement headquartered on an 80-acre campground in Cannon Ball, North Dakota. The community began with members of the Standing Rock Sioux tribe, and has now grown up to 8,000 people.

Water protectors and activists from across the country sleep in tents and teepees beneath flags from 300 tribal nations, gather around campfires, and cook meals like tacos with grilled bison in open-air kitchens. There’s even a day care center for children.

The pipeline’s path through four states not only threatens Native American sacred lands and cultural sites, but also compromises food security and water access for families who call the Standing Rock Sioux Reservation and neighboring communities home. Without a guarantee that the pipeline will be halted, the community plans to remain permanently, even with winter approaching. 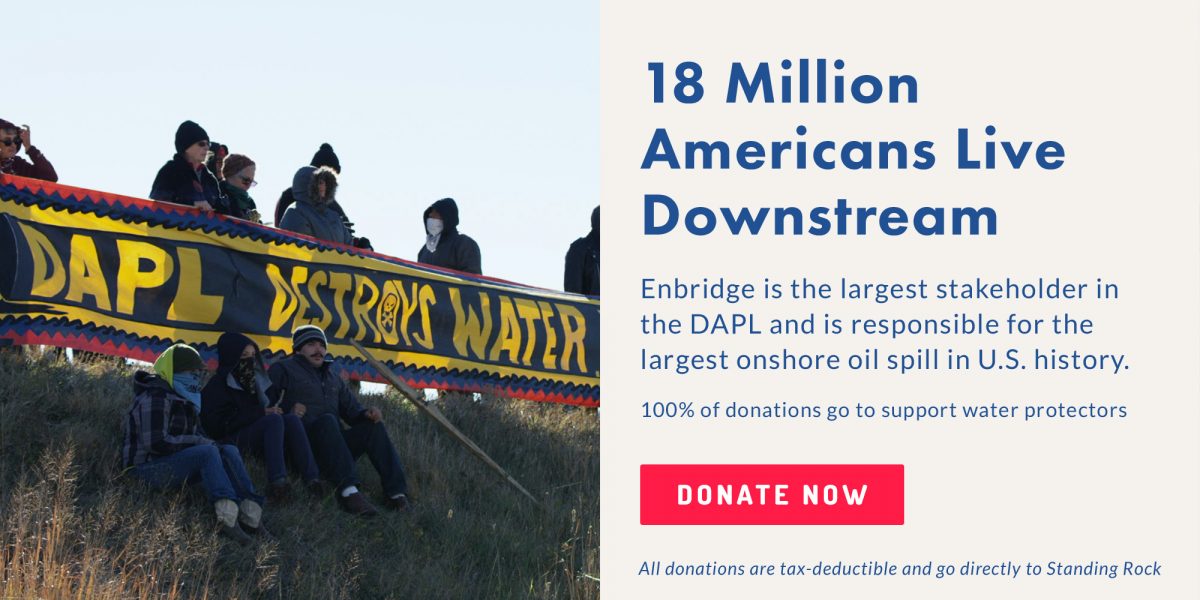 North Dakota became an epicenter of the recent United States oil boom after drillers began using relatively new fracking techniques to extract oil from the region in the late 2000s. Lacking any infrastructure to transport the oil, drillers proposed the Dakota Access Pipeline, which will carry more than 20 million gallons of crude oil daily from the Bakken region of North Dakota through South Dakota and Iowa before connecting to an existing pipeline in Illinois. 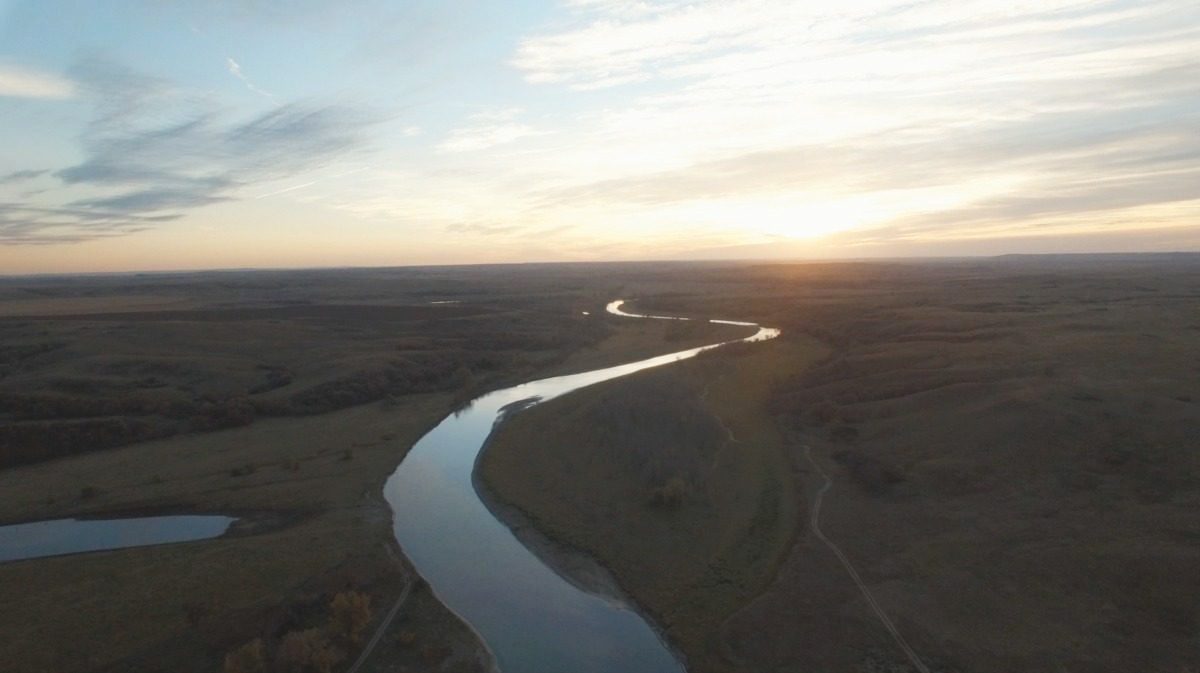 Pipelines are not without risks. Since 2010, over 3,300 incidents of crude oil and liquefied natural gas leaks or ruptures have occurred on U.S. pipelines. These incidents have killed 80 people, injured 389 more, and cost $2.8 billion in damages. They also released toxic, polluting chemicals in local soil, waterways, and air. 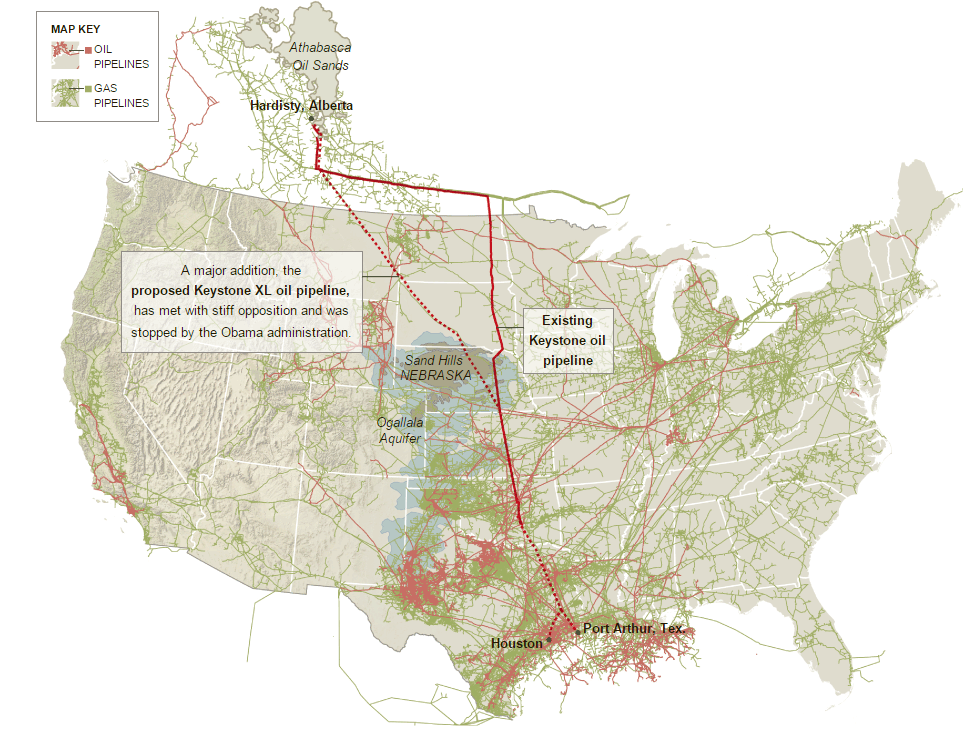 Over 1,000 of these incidents occurred on pipelines carrying crude oil. Supporters believe the pipeline will help reduce the U.S.’s reliance on foreign oil, as the original proposal from Dallas-based pipeline developer Energy Transfer Partners promised to support 100 percent domestic oil consumption. However, in an SEC filing from earlier this year, oil from the pipeline is now slated for export. This reversal comes on the heels of the December 2015 Congressional agreement to lift the 40-year ban on exporting domestically produced oil. 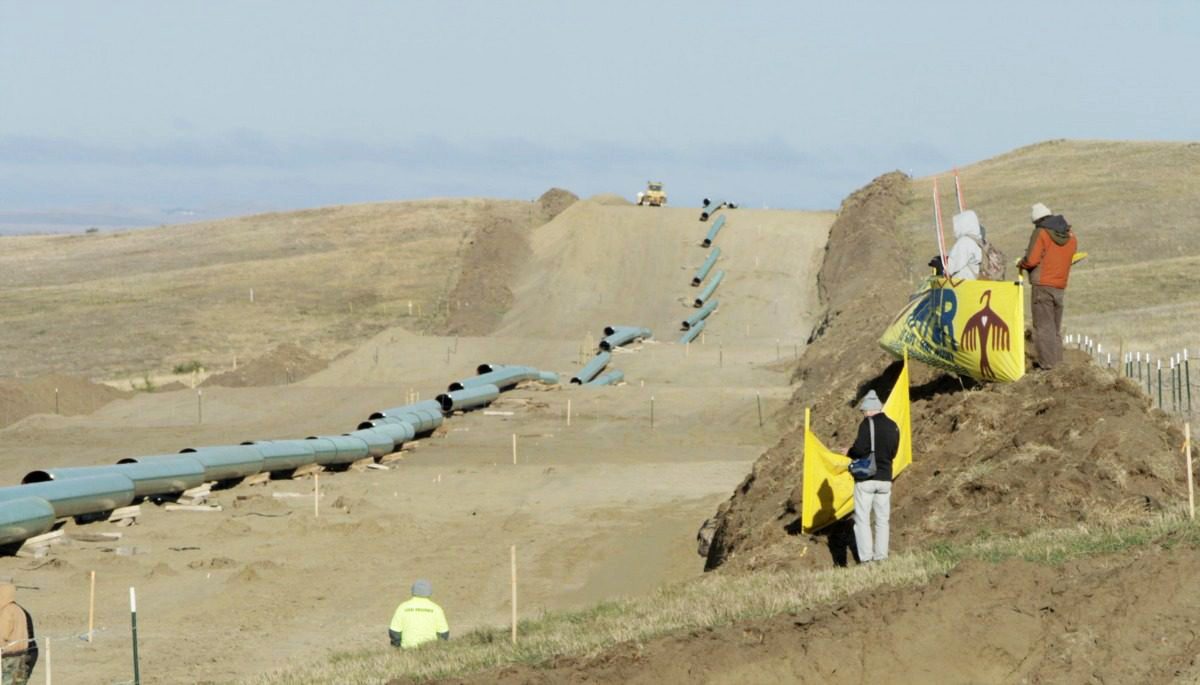 Who are the stakeholders?

Situated in the Black Hills of North and South Dakota and along the Missouri River, the Standing Rock Sioux Reservation is the sixth-largest reservation in the U.S. by land area (3,600 square miles), with a population of 8,000. The people of the Standing Rock Sioux Tribe are members of the Dakota and Lakota nations, meaning “friends” or “allies.” The term “Sioux” dates back to the seventeenth century, when the Ojibwa called the Lakota and Dakota “Nadouwesou” meaning “adders.” Over the years, this term was misused and shortened by French traders, resulting in the retention of the last syllable as “Sioux.”

The pipeline is being constructed by Energy Transfer Partners (ETP) and Houston-based investors Enbridge Energy Partners. Although ETP’s website states underground oil pipelines are the safest way to transport crude oil and promises to take precautions to safeguard culturally or environmentally sensitive areas, a single leak could be disastrous to the region. From 1999 to 2010, Enbridge was responsible for 804 oil spills, dumping 5 million gallons of oil into the environment, including the largest onshore oil spill in U.S. history.

The United States Army Corps of Engineers—the federal government body in charge of the nation’s waterways—granted approval for construction on the land. The tribe believes the Corps failed to conduct thorough cultural and historical reviews before granting federal approvals for construction. 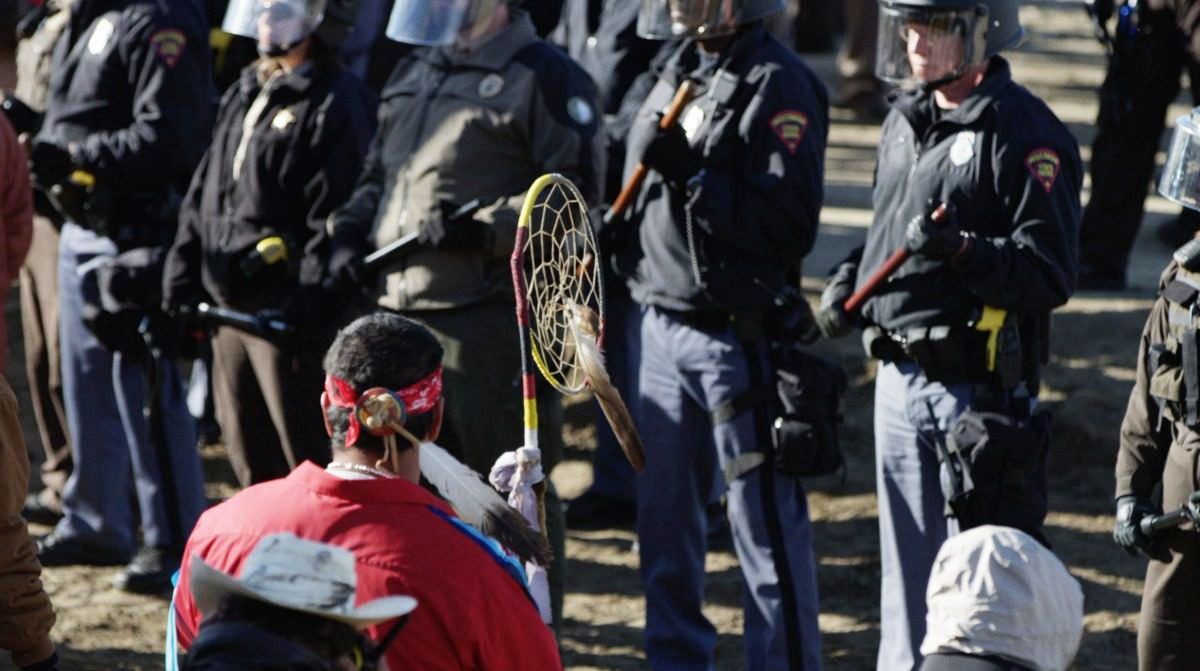 Where is this happening?

Originally, the pipeline was set to cross the river north of Bismarck—the affluent capital of North Dakota—but the Corps determined the original route posed unacceptable risks to the municipal water supply and was rerouted 40 miles south, near the Standing Rock Sioux reservation. Here, the population is 75 percent American Indian, with an average per capita income 65 percent below the national average.

Although the pipeline route does not directly cross the reservation, the tribe is voicing concerns about potential damage to recently discovered burial sites on land that has been taken away unjustly over the past 150 years. The pipeline also poses environmental risks, such as drinking water contamination in Lake Oahe and the Missouri River.

The Missouri River is the longest river in the U.S. and forms the fourth-largest river system in the world. It’s a critical habitat for wildlife, provides irrigation water for agriculture and livestock, and is the primary source of water for the reservation’s 8,000 residents. 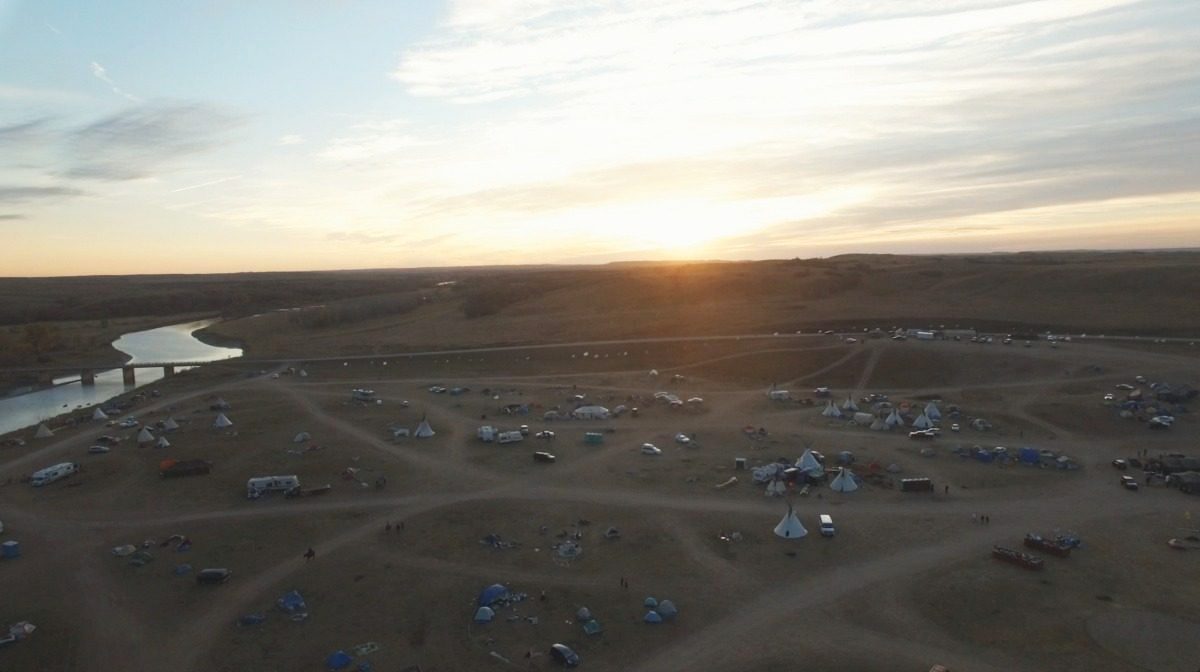 “Water is what we’re made of,” Drucilla Burns, an an octogenarian and tribal elder told the Washington Post. “We’re supposed to be the protectors of the land and water.”

Get social. Follow the campaign on social media using hashtags #NoDAPL or #StandWithStandingRock

Share. This effort started with only a few people and has grown into a global movement. Share updates with your friends and family and help spread the word.

Donate. 100% of donations via ThriveAction.org will fund the camp’s winterization efforts. Gifts will be distributed directly to Standing Rock by UpToUs, an organization started by Shailene Woodley and Ann Kleinhenz, dedicated to educating and empowering communities to become compassionate and engaged leaders. For the administration of funds, UpToUs has partnered with All It Takes and the Standing Rock Sioux Tribe.

Why Thrive Market got involved

Thrive Market is focused on making healthy living easy and affordable to everyone by offering the best organic and non-GMO groceries at 25-50%. We believe access to healthy food is at the epicenter of so many problems that we face—economic, environmental, and social. If waterways are polluted, how can we hope to leave a healthy world to future generations?

We also believe it’s a moral responsibility for businesses to actively help create a sustainable and socially equitable world that accounts for people, profits, and our planet. In solidarity, we’ve donated a semi-truck of food and are helping organize this campaign with friends and partners.

To join us on this mission, donate to support Standing Rock, and share the campaign with your friends.

To learn more about Standing Rock and see a detailed timeline of events, click here.

Thrive Market is democratizing access to healthy living by delivering organic foods and nontoxic products for 25 to 50% off retail.