How to Cook Lobster Tails

Considered king of the sea, lobster has long been synonymous with luxury. Though it can be more expensive than other options like shrimp or crab, it can be well worth the splurge sometimes. From taste to nutrition, there are a number of benefits to eating lobster.

But, it can be rather difficult to cook if you have never done so before. Here’s how you to shop for the right kind, get it home, and prepare properly to make sure your dish is as special as the crustacean itself.

When trying to rationalize the splurge on lobster, it may be helpful to know that this seafood can be an incredibly good source of lean protein, and also has a very low saturated fat content. Additional nutritional value comes from:

Like most fish, lobster also delivers a good amount of essential omega-3 fatty acids that the body is unable to produce, but needs for brain health and other key body functions.

However, it’s important to note that lobster can be high in sodium and cholesterol so you may want to limit the amount you eat, particularly if you are on a restrictive diet. As well, it’s best not to add loads of butter or salt to the dish, which will tack on even more sodium and cholesterol.

One of the first things you’ll have to decide is whether you want to buy a whole, live lobster or just bring home lobster tails. In order to get the freshest possible lobster, the best option is to purchase a live one and take it home the same day you want to cook it. This ensures fresh taste and the best quality on your dinner plate.

However, buying a live lobster does bring some level of trepidation and inconvenience to actually transport it home and prepare it. As well, live lobster will cost more, but you will get more meat for your money.

If opting for live lobster, focus on a healthy specimen that is the right size for your meal. If you’d rather go for lobster tails, there are a few more things to know.

There is one key thing to always remember with lobster tails—cold water usually means better lobster. That’s why Maine is often thought of as the home of the best lobster in the country, fished from the more frigid Atlantic waters.

That’s because cold water means it will take the lobster longer to grow, which means the meat will usually be more tender and taste better. You can always ask your local seafood specialist where their lobster originated from; if they don’t have a clear answer, you can also check the tails yourself—avoid dark spots since those are generally a sign that lobsters have come from a warmer location.

There are a few other basic points to know:

A note on imitation lobster

If your preference is to buy bagged lobster meat or pre-made goodies like lobster cakes, know that what you are getting may actually be imitation lobster. Imitation lobster is generally a blend of Pollock fish and lobster meat, and often has added preservatives and flavorings. While it may appear to be a more affordable option, there is no replacing the real thing. Always check the packaging to ensure that you’re buying real lobster tails, not imitation lobster meat. 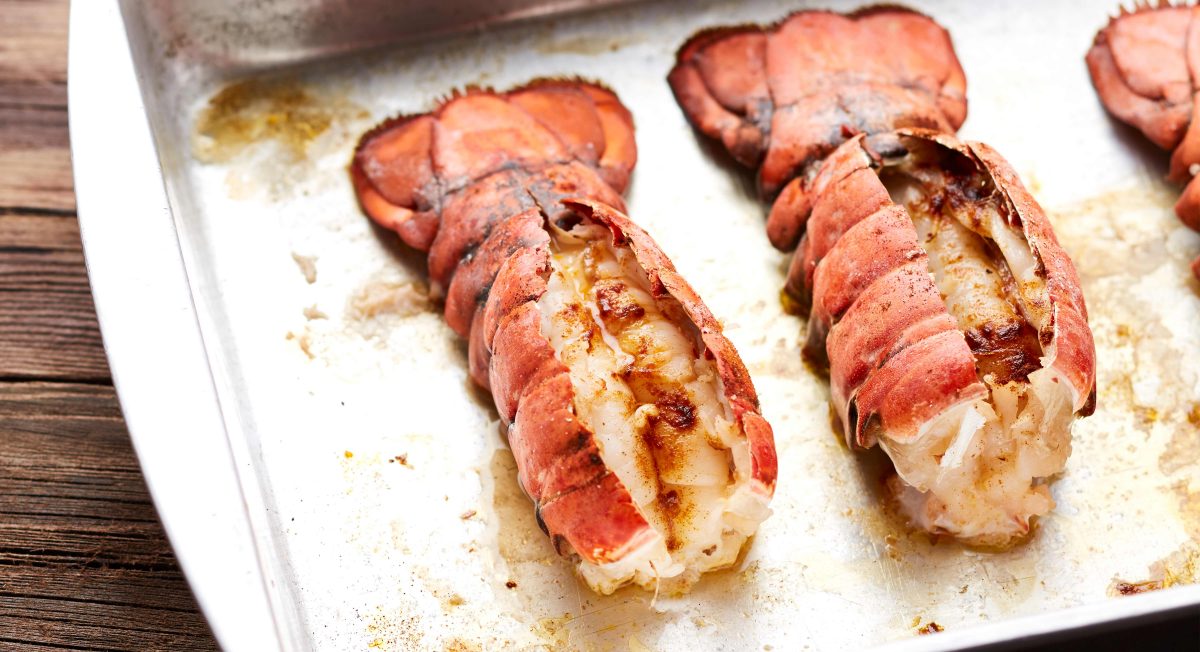 The next step is, of course, to prepare the lobster tails at home. It’s more than just throwing lobster in a pot of boiling water; in fact, there are many ways to prepare lobster tails, each of which provides a different taste and texture in the final result. Play around with each cooking method to find the one that you like best.

Boiling is the most common method of preparation, and probably the easiest. If you have frozen tails, the first step is to place them into a bath of cold water for about a half-hour so they completely thaw. Larger tails may need a longer period of time (and may need additional water).

You’ll know the tails are thawed when they feel somewhat flexible to the touch. At this point, you’ll also want to remove the dark colored line running along the tail, which is the digestive tract, and should be discarded. When ready, follow these next steps:

Grilling has also become a very popular method of cooking lobster tails, allowing a more interesting taste while also making it possible to add more dense seasonings as the tails cook. Follow the instructions above for thawing frozen lobster tails, and then get grilling:

Broiling is another option that makes it easy to enjoy lobster tails at home. Begin with the same thawing process used above, and then follow these steps:

The all-important side dishes to pair with lobster tails

As with any other kind of meat-based dishes, sides matter. Here are tasty options to pair with lobster tails that can be as healthy as they are delicious.

Most steakhouses pair their thick cuts and fresh seafood with a side of potatoes. But if you’re trying to be healthy, you can get the same effect with this recipe that whips up parsnips and green apples with coconut milk, ghee, and a mix of flavorful seasonings.

While you have the grill fired up after searing your lobster, cook your salad as well. Yes, romaine lettuce tastes great when charred—allowing the outer leaves to soften while the base remains crunchy. Prepare an avocado-lime dressing to go with it, and top with boiled eggs and parmesan cheese.

A side of broccoli is another chophouse staple. This recipe uses its more slim and mild cousin, broccolini, prepared Japanese style with nori, coconut aminos, and sesame oil.