It’s an age-old debate in the meat world: what’s the difference between Ribeye vs. New York Strip? At first glance, a New York Strip and Ribeye steak look pretty similar, but upon closer inspection, you’ll notice a ribeye has more marbling (aka flavorful fat) running through it. Strip steak, on the other hand, features a thick band of fat that runs down one side, and is typically cut away and discarded. Read on for even more interesting facts about these two popular cuts, including our favorite recipes and seasonings for New York Strip vs Ribeye. 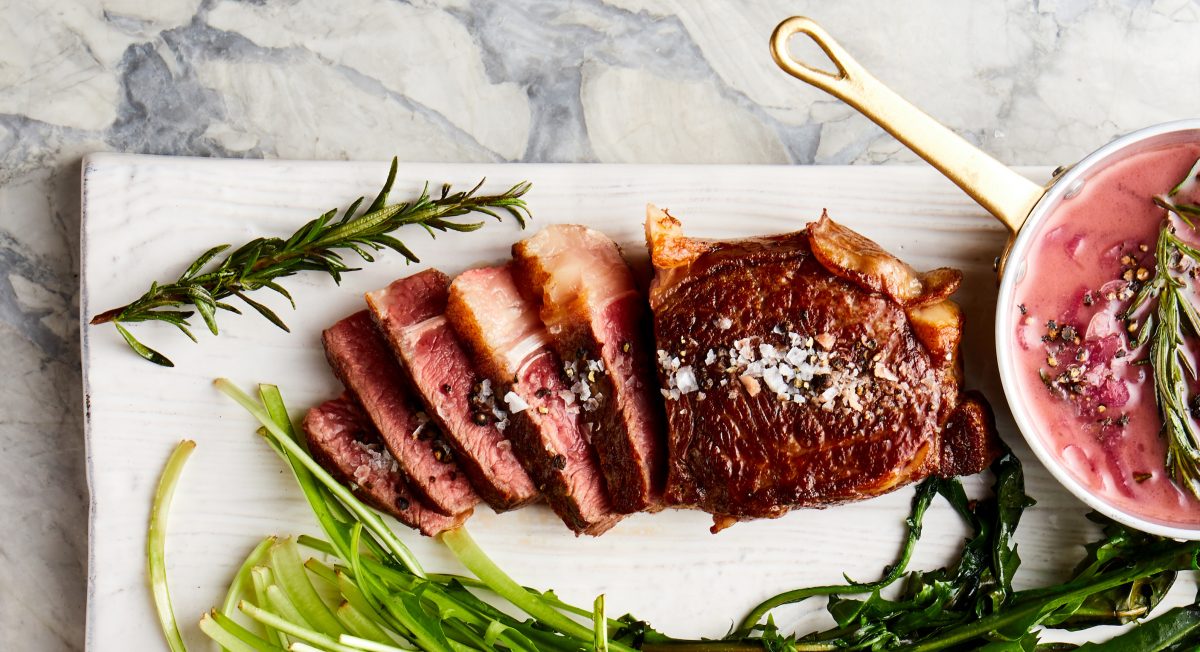 No matter what you prefer over NY strip vs. ribeye (and each one has its virtues), there are many benefits to adding some grass-fed beef to your diet. For one, it’s paleo-friendly. As for the nutritional benefits, one study suggests that when compared to grain-fed beef, grass-fed beef ups your intake of vitamins A and E, as well as antioxidants, such as glutathione and superoxide dismutase, as compared to grain-fed contemporaries.

In addition to potentially boosting your nutrient intake, there are environmental benefits to choosing grass-fed beef. When cattle has plenty of room to roam on land untouched by chemicals, the animals do their part by fertilizing the soil. Because much of the planet’s greenhouse gas emissions are generated by livestock—and specifically, the production of grains used to feed the animals—keeping cows on a grass-fed diet helps reduce the amount of emissions flowing into the atmosphere. Not only that, but when animals eat their natural diet, they can better absorb key nutrients, which makes them healthier and less likely to need antibiotics.

What Is a New York Strip Steak?

Beautifully marbled with a tight grain, New York Strip steaks come from the top of the short loin. This cut cooks best over direct high-heat, making it a perfect option for outdoor grilling.

Serve this tender cut with mashed potatoes and green beans, add bold spices for fajita night, or toss strips into a crisp salad. After grilling, be sure to let your steaks rest for at least 10 minutes before slicing—this key step will help ensure that the juices are redistributed.

Instructions
Season steaks generously with salt and warm a sauté pan over high heat. Sear steaks for 4 to 5 minutes, then flip and cook for 4 to 5 minutes more, or until internal temperature reaches 135°F. Remove steaks to a cutting board and tent with foil; rest 10 minutes. Slice steaks against the grain before serving.

What Is a Ribeye Steak?

A Ribeye goes by several other monikers, including Delmonico steak, Spencer steak, and Scotch fillet. No matter what you call it, this highly marbled cut comes from the center of the rib steak.

We’re here to answer all your burning questions as you decide which of these two proteins to serve up for dinner.

Both New York strip and ribeye are highly flavorful and tender cuts of meat. Thanks to the higher marble score, ribeye steak will have a richer, beefer flavor profile compared to a NY strip.

Which cut is healthier?

When choosing between a ribeye steak vs. New York strip, both would make an excellent source of protein for your dinner plate. The New York strip, however, will be slightly less fatty than a ribeye.

Which cut is more affordable?

When comparing the cost of NY strip vs. ribeye, the ribeye will usually be the more expensive option. Shop grass-fed beef at discounted prices on Thrive Market here.

Since the Ribeye is a fattier cut, grilling can sometimes cause fire flare-ups. Reduce the risk of your fire alarm going off by pan-searing. Before you start, be sure the steaks are patted dry with paper towels to remove excess moisture.

Instructions
Sprinkle steak generously with salt. Heat a cast-iron pan over medium-high. Add a turn of oil and when it shimmers, add steak and cook, flipping frequently, between 6 and 12 minutes depending on thickness, or until the internal temperature reaches 135°F. For a decadent finish, melt butter in pan before removing steak to a cutting board. Tent with foil and let the meat rest for 10 minutes before slicing against the grain.

The Best Spices for Steak

Even if you’re still debating the choice between a New York Strip vs. Ribeye, spices matter. Sometimes nothing beats searing your steak on a hot grill and finishing it with salt and pepper, but there are lots of pantry workhorses to take things to the next level. 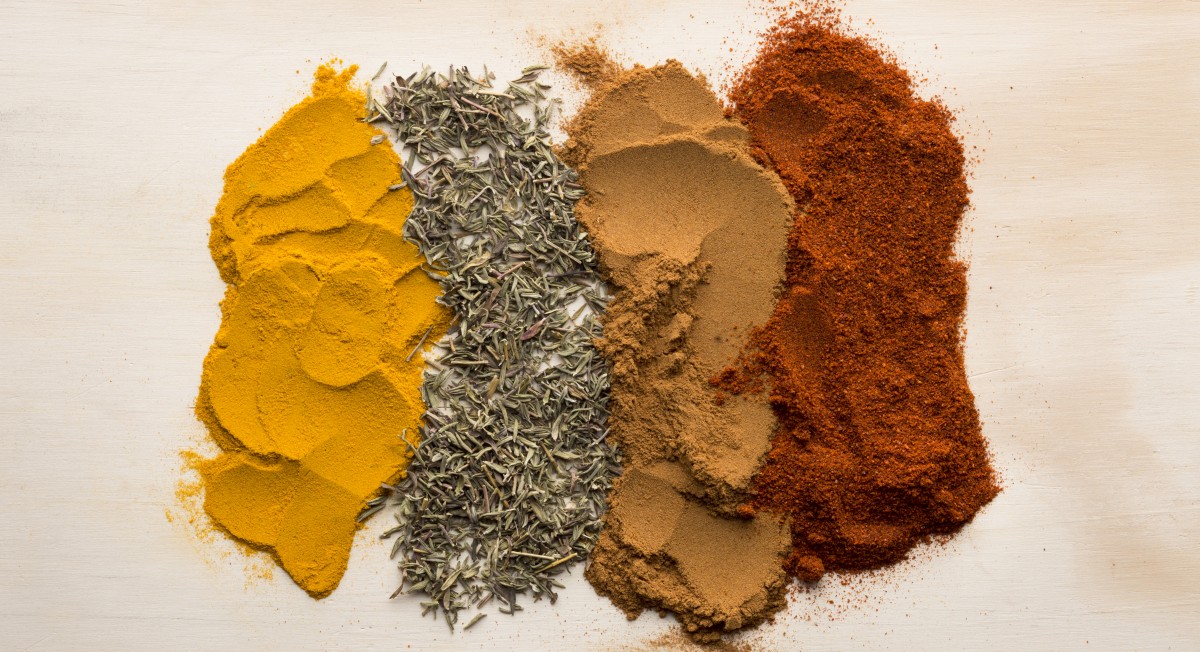 This lively mix features a coarse blend of salt, garlic, thyme, coriander and other spices. And it’s not just for steak—sprinkle this seasoning on pork, chicken, or grilled veggies, too.

Frontera Carne Asada Marinade for Steak, With Jalapeño and Garlic

When steak fajitas are on the menu, liberally sprinkle this organic seasoning mix on your meat and vegetables for quick Tex Mex flavor.

Before your steak hits the grill, marinate it with this mouth-watering mustard sauce from The New Primal. The bright flavor is both zippy and warm thanks to golden turmeric and apple cider vinegar.

Invite the fresh flavors of the Mediterranean into your kitchen with this herbaceous spice blend of rosemary, oregano, garlic, and onion.

When it comes to the best ways to cook your favorite cuts of beef, here are our top recipes from ThriveMarket.com

For pan-seared perfection, just add salt and pepper, butter, and fresh herbs. This steak cooks up juicy and tender, with a golden crust from the hot cast iron.

Sweeten up your date night in with a dollop of vibrant cherry steak sauce to enhance every bite of tender ribeye steak. Bonus: the sauce can be made in advance and warmed up right before dinner.

If you’re watching your carb intake, add a base of cauliflower rice to this hearty burrito bowl. New York Strip Steak is a filling topping alongside grilled red onions, avocado, and pico de gallo. 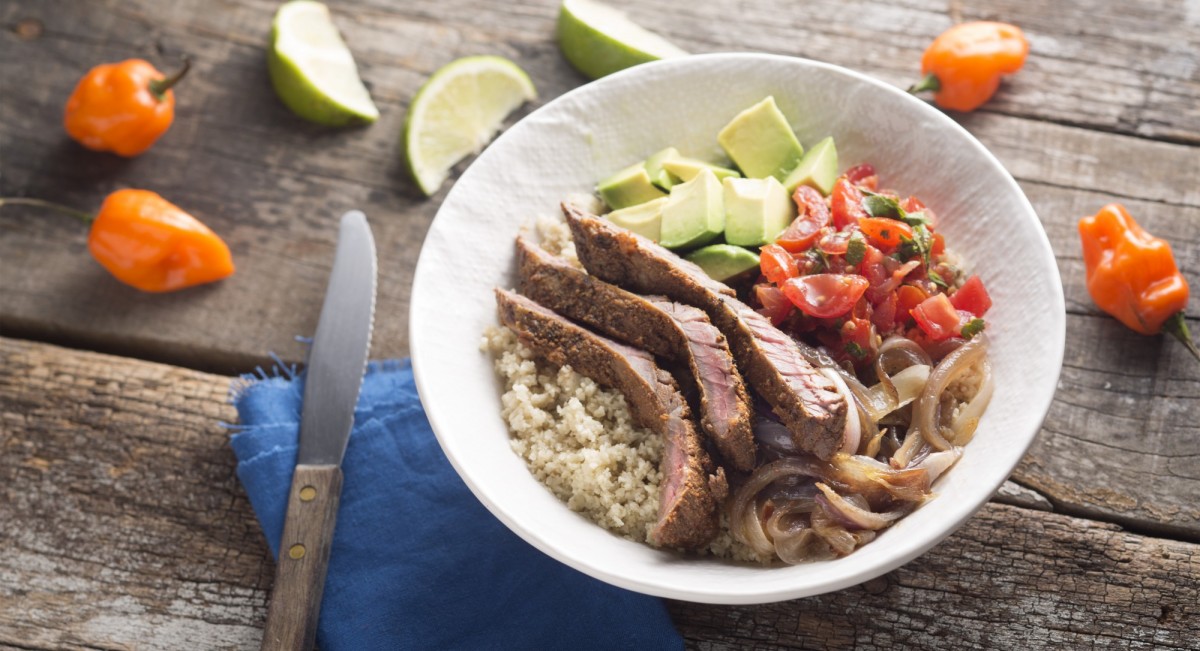