A Home Cook’s Guide to Salts

Any home cook worth their salt knows this ingredient is a non-negotiable kitchen staple. After all, a simple pinch can make everything from mushrooms to meat do one important and profoundly simple thing: taste like the best version of itself. But which salt is best? With myriad options to choose from these days, the basic act of seasoning food is a potentially confusing one. Keep reading to discover everything you need to know about this ancient ingredient, and how to make the most of it in your modern kitchen.

Salt is made from the chemical reaction of sodium and chlorine, two minerals all living organisms need, humans included. Throughout history salt has been used as currency in Africa, given as part of a salary in Roman times, and was once considered a luxury only for the rich. As Time reports, the history of the world is paved in salt: “animals wore paths to salt licks; men followed; trails became roads, and settlements grew beside them.” Today, two types of salt are most prominent. Sea salt is created from the evaporation of seawater, while commercial salt is manufactured from rock salt (mined from quarries) and artificial brines (like pumping water into underground salt beds

What is Kosher Salt?

What is Table Salt?

What is Sea Salt?

What is Himalayan Pink Salt?

What is Celtic Sea Salt?

What About Specialty Salts?

Not to complicate your salt decisions, but there’s one more category to consider. Once you have kosher and sea salt covered, you might want to consider adding a slightier fancier version for special occasions. From smoked (ideal for the grill) to truffle-infused (try it on popcorn), there are a handful of unique options that can take a dish to new heights. Is it essential? Maybe not. Will it delight your palate? Absolutely.

The Best Salts for Your Pantry 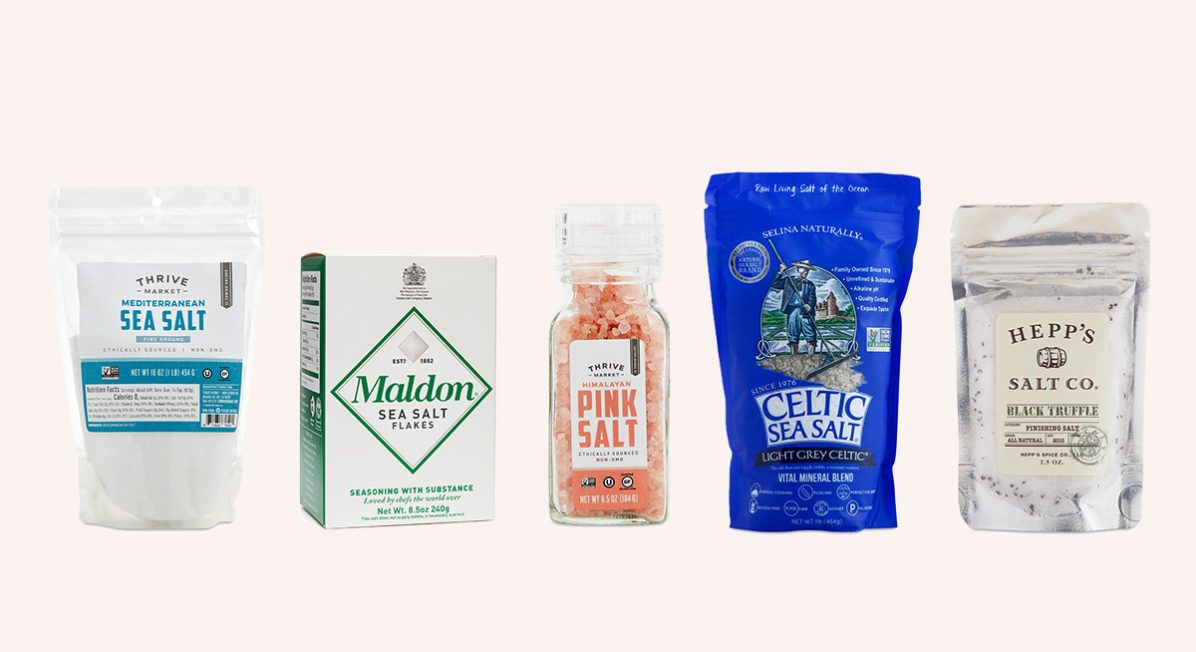 Stock up on member favorite salts for every cooking occasion.

This fine sea salt is harvested using solar technology and dissolves easily, making this bag a mineral-rich pick for your daily cooking. Thrive Market member Megan from Missouri says this salt “is a perfect texture and size of grind for cooking or finishing dishes. Its quality is very high as it is uniform and has no powdery wasted salt when you get to the bottom of the bag.”

The king of finishing salts, Maldon flakes are large and flaky, perfect for topping both savory and sweet dishes. Add a pinch to meats just before serving, or cookies right before baking. Bianca from Illinois shares “we love topping our food with some sea salt for extra flavor, and this salt does the job.”

This unprocessed and raw salt comes in an easy-to-use and refillable grinder, and contains more than 80 trace minerals. Brigitte from Oregon likes that you can adjust the texture from fine to coarse, and “the good clean taste.”

Selina’s unprocessed gray salt is sourced from pristine coastal waters and Certified Organic by Nature et Progrés, the highest level of certification allowed in Europe. Christy from North Carolina recommends topping off your steak with it, and loves that the texture is “nice and flaky.”

Treat yourself to the alluring flavor of black truffle found in Hepp’s carefully crafted bag. Marimonica from Illinois reports it has “great flavor and aroma” and highly recommends adding a pinch to your next baked potato.