“I need coffee.” It’s a phrase most of us utter (or hear) every single day.

In the U.S. alone, 80 percent of adults consume some form of caffeine daily. Obviously we’re obsessed—with coffee, in particular. And it’s not just the dark, roasted flavor, or the rich and robust aroma—it’s that undeniable feeling of sipping your way to a state of alertness and focus. There’s nothing better. Drinking it is a morning ritual for so many people. And it’s always there—brewing nonstop in office kitchens, waiting rooms, and of course, cafes on every corner.

It’s so ubiquitous that we’ve come to take it for granted. But the world’s favorite beverage actually has a LOT to offer in terms of health benefits—it’s full of essential phytochemicals and antioxidants. 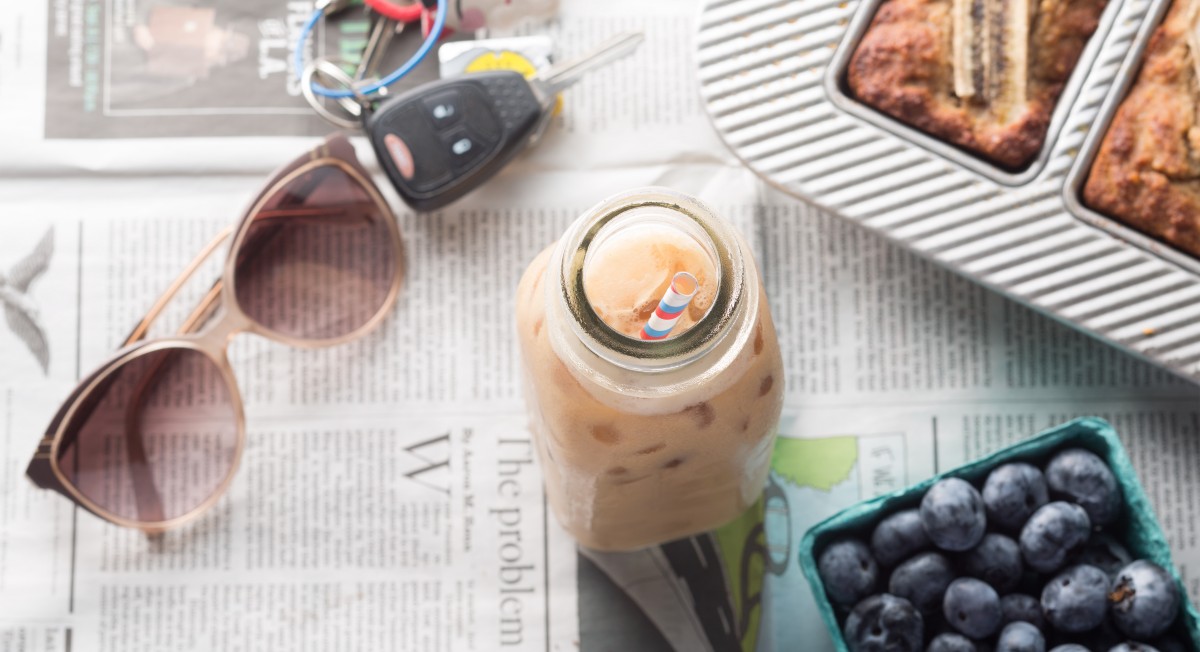 Check out some of the amazing things coffee can do for you and your body.

The No. 1 advantage to drinking java is of course getting that jolt of energy. According to the USDA, one 8-ounce cup of joe has about 95 milligrams of caffeine—more than most other sources, including tea, soda, and chocolate. Various studies have shown that just one cup produces the desired effects, but sensitivity does vary from person to person, depending on genetics and body weight.

With that dose of energy also comes a brain boost. Those first moments of grogginess in the morning are usually not our most mentally sharp. Some people may take as long as a full hour before they feel their noggin is functioning at its optimal acuity. In many cases, coffee to the rescue! The caffeine is absorbed into the bloodstream and travels to the brain, where it can boost cognitive function, alertness, and even mood. It can even potentially ward off degenerative disorders like Alzheimer’s and dementia. In men, consumption has been linked with a lower risk of developing Parkinson’s disease.

Heading to the gym? Most people would default to hydrating with a glass of water, not coffee, which could have the opposite effect, right? Well, turns out coffee makes a pretty stellar pre-workout beverage to help you go the distance. Caffeine has shown to reduce ratings of perceived exertion—meaning, it can make intense exercise feel easier by as much as 12 percent on average. It also gets your adrenaline pumping.

On top of that, caffeine also increases metabolism, and optimizes fat-burning by 10 to 29 percent—potentially aiding weight loss. Try having a cup 30 minutes to an hour prior to gym time and see how it feels.

For such a low-calorie beverage (about 2.4 calories per 8-ounce cup), coffee’s got quite a few nutrients to offer: thiamin, riboflavin, niacin, folate, magnesium, phosphorous, potassium, and manganese. While these are all present in small amounts, in a standard American diet that’s typically deficient in fruits, vegetables, and whole grains, a coffee or two every day can help close the gap.

Several studies have shown a correlation between a high intake of coffee and a significantly reduced risk of type 2 diabetes. There are a few factors that could be responsible for this effect. Caffeine may decrease insulin sensitivity, which occurs when our bodies need to produce more insulin than normal just to keep blood sugar stable. Scientists have also discovered that certain compounds—particularly caffeic and chlorogenic acids—seem to inhibit the accumulation of a toxic protein associated with the disease. Studies show than drinking as many as four to six cups a day can provide more dramatic effects, but consult your physician to see if they recommend drinking more java.

Coffee may be good for your liver, too, thanks to its hundreds of compounds. In an observational study of 27,793 people, those who drank three cups, regular or decaf, were 75 percent more likely to have normal liver enzyme levels, and thus experienced protective properties against liver disease and even liver cancer.

Not only does coffee exhibit cancer-fighting powers in the liver—it can also protect against colorectal cancer, as shown in a study of 489,706 people who drank four to five cups a day.

Its effects against prostate cancer may even be life-saving—in a 2014 analysis of studies on the subject, men who drank more than four or five cups a day experienced far fewer cases of advanced prostate cancer.

Women who drink several cups daily may also see a reduction in cases of endometrial cancer, possibly due to coffee’s tendency to lower estrogen levels.

And according to a study published in the journal Cancer Research, caffeine may protect against the most common form of skin cancer, basal cell carcinoma. The results were greater in men and women who drank more than three cups daily. But the researchers still advise against relying on coffee to offer adequate sun protection—so don’t skip the topical SPF.

Most people have experienced that perked-up feeling that comes from sipping on some java. Well, it’s not all in our heads. Actually, it kind of is, in a literal sense:

“Caffeine not only stimulates the central nervous system but may act as a mild antidepressant by boosting production of certain neurotransmitters in the brain, including serotonin, dopamine, and noradrenaline.” —Marge Dwyer, Harvard School of Public Health Communications

And according to researchers who published a separate study on its effects on stress and mood, in the journal Proceedings of the National Academy of Sciences:

“ … caffeine … prevents [adenosine] receptors from reacting to, and causing a stress response, including a bad mood, memory problems, and an enhanced susceptibility to depression.”

In the study, animal subjects that consumed caffeine experienced no stress-induced changes to their brains and behavior, compared to the control group, which did exhibit higher levels of stress.

So if you’re feeling down, turning to a comforting cup of joe may offer a quick pick-me-up.

A 2012 study from the National Cancer Institute found that coffee drinkers tend to live longer than those who abstain. More recently, a study from the Harvard School of Public Health found that those who drank three to five cups daily were 15 percent less likely to pass away prematurely—although the study merely shows an association rather than cause and effect. Caffeine didn’t even seem to be much of a factor in these studies—even drinking decaf showed similar results, pointing to the power of coffee’s many phytochemicals.

We pretty much know the drill when it comes to antioxidants—they fight free radicals (unpaired electrons) that accumulate in the body over time from everyday occurrences like digesting food and even breathing. (Environmental pollutants can also increase free radicals in the body.) These highly reactive, lone electrons seek to pair up with other electrons and end up scavenging them from other molecules, causing cell damage, which can lead to accelerated aging (not to mention cancer and other diseases).

“Antioxidants neutralize free radicals either by providing the extra electron needed to make the pair, or by breaking down the free radical molecule to render it harmless.” —Solmaz Barazesh, Science Writer, National Academy of Sciences

Antioxidants have become lauded as one of the keys to anti-aging skin care. And it turns out most people get a majority of their antioxidants from coffee, rather than other sources such as vegetables and fruits. While we do recommend a diet rich in fresh produce, it’s nice to know that an espresso habit may help boost the skin’s radiance and elasticity.

Risks and disadvantages of coffee

Just like most things that are good for us, coffee’s rewards may come with a few risks.

It seems that many of the benefits of coffee are amplified by drinking more of it. However, it’s possible to develop a tolerance, which can lead to binge drinking (of lattes, that is). Be careful not to exceed 10 grams of caffeine (that’s 75 8-ounce cups within a few hours), which is considered the toxic level in humans. (Okay, that’s a lot, but the more you know…)

Another reason to keep an eye on your intake—you could develop a mild physical dependency on it. Both tolerance and dependency are not only bad for the bank account (hey, those $4-and-up takeout cups ain’t cheap), but also make it easier to fall in love with the local cafe’s sweet offerings, which are nothing more than sugar- and calorie-bombs.

As with any “addiction,” quitting or cutting back on caffeine abruptly may bring about symptoms of withdrawal, including:

We know that coffee is powerful stuff, so it’s no surprise that it can alter physiological states in the body. Caffeinating before bed may keep you awake at night by inhibiting the way adenosine, a molecule that helps your body go to sleep, works in the body. This reaction can also trigger the all-too-familiar jitters. James Lane, a researcher out of Duke University, noted the link between caffeine and stress:

“ … caffeine always exaggerates the effects of whatever stresses we are currently experiencing in everyday life. It is curious that people often turn to coffee in times of stress, like deadline pressure. The caffeine makes the deadline more stressful.”

Pay attention to your body and give yourself a coffee cut-off time—a good rule of thumb is to refrain from drinking it six hours before sleepy time. And If you’re going through something hectic, it might be a good idea to cool it on the coffee.

Drinking unfiltered coffee (i.e. brewed in a French press) may raise the bad cholesterol, LDL. But caffeine isn’t to blame—it’s the compound called cafestol. Luckily, it can be removed by using filters, so regular brewing processes tend to be safer. But if you love your French press, consider reserving it for special occasions.

It’s also high in omega-6 fatty acids; while these are essential, too much can raise blood pressure and lead to blood clots that can cause heart attack and stroke. It’s important to balance omega-6s with omega-3s—that’s the beauty of drinking a version of Bulletproof coffee that incorporates grass-fed butter for added omega-3s.

There’s been conflicting research on the consequences of caffeine consumption on pregnancy, but an extensive study last year of 5,000 women found that drinking caffeine in early pregnancy seemed to increase the likelihood of having a miscarriage; the risk peaked at 200 milligrams per day. Experts advise that pregnant women should limit coffee intake to less than one 12-ounce cup per day until more research is done. But of course, consult your own physician for what’s best for you.

Stopping by a Starbucks before heading out on a road trip sounds good in theory, but it’s also going to up your number of pit stops. The diuretic nature means more frequent trips to the bathroom—for number one and two.

So, is coffee healthy? For sure! If drinking it is one of the highlights of your day—and it is for most people—then by all means, enjoy! But for those who aren’t big fans, experts don’t necessarily recommend starting just for health benefits. There’s always green tea.