For some people the holidays mean Christmas, but many others also celebrate Hanukkah. Also known as the Festival of Lights, it’s a Jewish tradition that began more than 2,100 years ago and is celebrated every year around the same time—this year, it begins on December 24.

Instead of a one-day celebration like Christmas, Hanukkah is an eight-day festival that reflects on the triumph of light over the dark. In particular, it pays homage to a historic victory in the second century B.C. when a small Jewish army revolted against the powerful Greek-Syrian regime and defeated them and squashed their wishes to have the Jews convert to a more Hellenic system of beliefs.

The Jerusalem Temple’s menorah—a seven-branched candelabra—was to be relit in a re-dedication ceremony after this impressive victory, but it was discovered that only a very small amount of olive oil was left behind from the Greek rulers. That one-day supply managed to burn for eight days until new oil was prepared and ready for use. This miracle led to the creation of the tradition of Hanukkah and its introduction as an annual celebration.

There are several different customs that have been passed down over the years, all designated to celebrate Hanukkah, and each one with its own special meaning.

The most obvious and well-known custom is the lighting of the menorah. Beginning on the 25th day of Kislev, a date on the Hebrew calendar that changes each year to align with the modern calendar, one candle on the menorah is lit each night over the span of eight days. This symbolizes the miracle of the oil lasting for eight days after the historic regime change. Modern menorahs may be also electric, or use oil.

The dreidel is a four-sided spinning top that children traditionally play with during Hanukkah. Each side is printed with a Hebrew letter, with all of them combining to form an acronym for, “A great miracle happened there,” referring to the events that occurred 21 centuries ago. A game has each player attempting to build the phrase in succession by spinning the toy.

Gelt refers to chocolate candy that’s wrapped in foil and shaped like golden coins. It’s based on a centuries-old tradition where children would give their teachers small amounts of money to show gratitude for their education.

As the the Christian holiday of Christmas became more and more prevalent throughout the world, gifts began to be included as part of Hanukkah celebrations, too. Some families give each other small presents throughout the entire eight-day celebration, while others have just one very large gift on the final night. No matter how it’s done, gift-giving serves the same purpose as many other holiday gatherings: Showing those who are closest to you that they are loved and cared about.

Another very common component of Hanukkah celebrations is music, with traditional songs like “Rock of Ages” playing a major role—it’s sung each night after the lighting of the candles. Many other songs are included, celebrating everything about the Festival of Lights.

While each of these traditions is important, there’s another large part of every Hanukkah celebration: food.

Food plays a tremendous role in Hanukkah. While other holidays involve meals that are based largely on family traditions and personal preferences, the food used in Hanukkah celebrations is actually very closely tied to the meaning of the holiday itself.

In particular, latkes and sufganiyot (donuts filled with jelly) are both very important. The reason is that they are fried in oil, which also symbolizes the oil lasting for eight days during the victories in the second century B.C. Other foods may also be cooked in oil or may simply follow basic Kosher guidelines, but the use of fried foods is closely connected to the beliefs and the observance of Hanukkah.

As such, it’s important that careful consideration be given to meals prepared for the holiday. In addition to fried goods, a traditional Hanukkah meal often includes braised meats and roasted vegetables, usually cooked in olive oil. Most also avoid pork, shellfish, and other non-kosher foods. 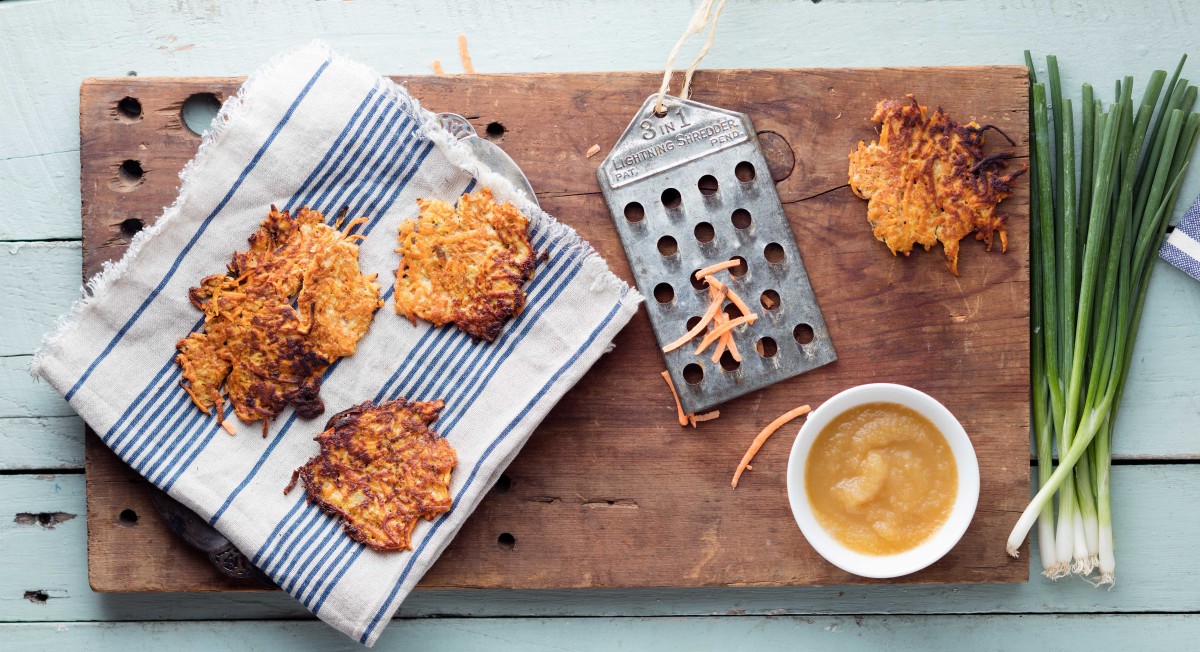 How to make Hanukkah recipes healthier

Of course, any time you hear the words fried foods, healthy is probably not the first thing that comes to mind. The issue is that, usually to fry something, it involves oils, and many of the common ones like vegetable, corn, or canola oil (or even shortening) can have trans fats that raise cholesterol and the risk for diabetes.

But, there are healthier oils you can use, like:

Once you have picked your choice, you can start to prepare your feast with the following ideas.

Side dishes and appetizers

Every Hanukkah feast always has delicious latkes, which are basically shredded and fried potatoes. This recipe uses sweet potatoes and apples instead to create a latke that is sweeter and more colorful, and has more nutritional value—they can also be fried using any of the oils listed above. Pair them with some organic applesauce for even more bursts of flavors and textures.

These are a perfect appetizer for any night of the festival and also harken back to the original Greek influence. They combine the rich, zesty taste of olives along with plenty of herbs and spices, and marinating the olives helps blend the flavors together even more. They can be served in individual bowls, on toothpicks, or simply enjoyed as a finger food. You can also vary up the size of the batches for smaller or larger party sizes.

Use rolled oats and whole wheat flour to create challah bread that’s filled with heart-healthy grains and an extra punch of fiber. For a gluten-free version, simply switch out the whole wheat for a gluten-free flour. Any leftovers (if you’re lucky) can be made into a breakfast side or French toast—one really standout recipe is caramelized banana toast.

Made from eggplant, baba ganoush is a nutritious Hanukkah dish already, but it can be made even better by being mindful of the other ingredients going into it. Using extra virgin olive oil, Greek yogurt, and organic tahini can ensure it has wholesome nutrients. For dipping, skip the breads in favor of veggie sides like cucumbers, carrots, and peppers.

Hearty beef short ribs are a delicious main course for any Hanukkah feast. This recipe uses a slow cooker to make the process more convenient, and also help the meat fall right off the bone. The use of lemon zest, basil, and balsamic vinegar create a great marinade. You can also try this braised short rib recipe with cauliflower mash for another perfect combo.

Ribs aren’t the only option when it comes to Hanukkah meals. This pot roast recipe adds carrots and onions to help season the beef, while using a slow cooker makes it moist, soft, and incredibly delicious. There’s practically no effort involved, though the results will speak for themselves and make this dish stand out as the centerpiece of any holiday meal.

If a roasted rack of meat is more your style, try this hearty edition that seasons the tender beef with whole grain mustard, thyme, black pepper, and garlic. After letting it cook for a couple of hours, it will be tender to the touch. 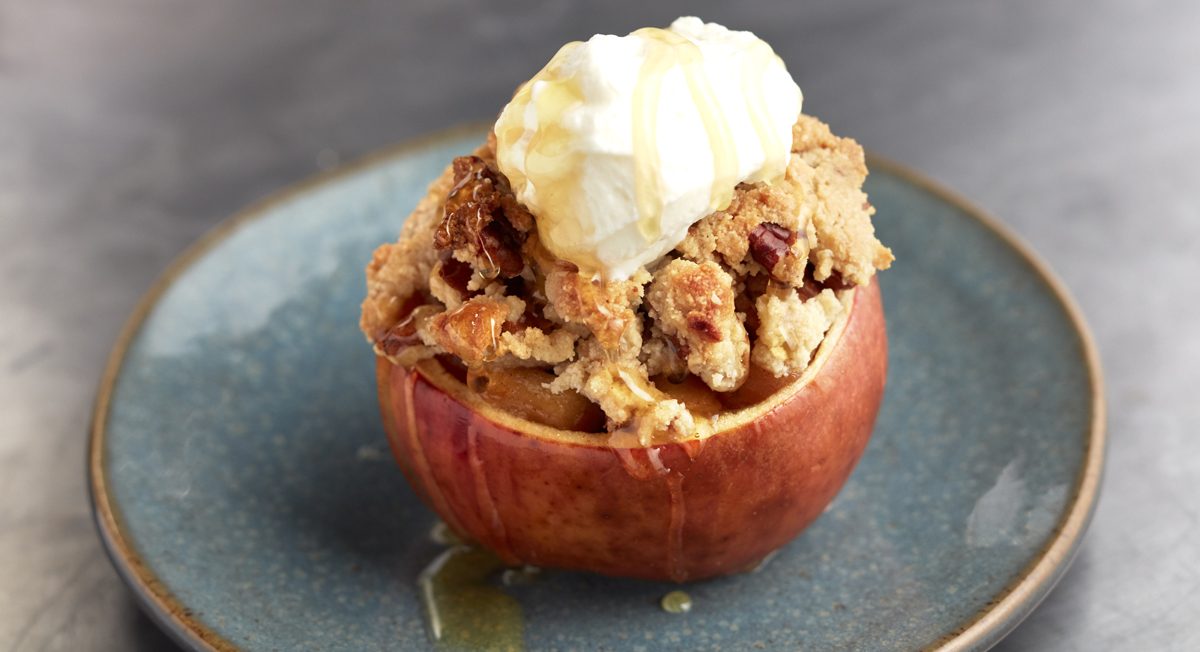 Traditionally, these Hanukkah jelly donuts are fried in oil, but baking them is another option. All you need is a mini muffin tin and piping bag for inserting the jelly inside. The result is still simultaneously crispy and tender.

Baked apples are gooey, sweet, and have quite a bit more nutritional value than their decadent taste would let on. Simply halve an apple and scoop out its core to get started, and then get to filling. This recipe offers an apple-crisp option inside, made with gluten-free almond flour, maple syrup, and lactose-free ghee. Don’t forget the cinnamon and honey!

For a truly unique way to end a Hanukkah meal, these little cakes are a great choice. The use of polenta helps give them an interesting texture and rich taste, while the blend of orange and rosemary flavors brings out the traditional tastes of the holidays.

Keeping the traditional flavors of Hanukkah going doesn’t require a lot of excess caloric intake, and creating healthier meals with the same or similar flavor profiles simply takes switching out a few key ingredients. Plus, healthy alternatives will provide a variety of new tastes and textures, and may even create some new year-after-year favorites.