4 Good Reasons to Make the Switch to Sprouted Flours

Part of me was a little disappointed.

I half expected to open up the bag of sprouted wheat flour to find little green leaves poking out. Of course, when cracked open, the bag revealed very normal looking whole wheat flour. No distinctive smell. No weird coloring. Definitely no fledgling plants, reaching towards sunlight.

At first glance, sprouted flours don’t seem all that special. Even when you begin baking with them, there really don’t behave too differently from their conventional counterparts. But the minute that sprouted flour doughnut hits your tongue … you can tell it’s something new.

The only difference between sprouted flour and the flour you’ve likely spent your whole life eating happens even before grains are pulverized into a fine powder. Sprouting takes place when the grain—wheat, for example—is soaked in water for a few days and begins to germinate, breaking open the shell and releasing a tiny little root. Tons of complex biomechanical processes are triggered by the release of the sprout, and under normal circumstances, this is when a plant would begin to grow.

Before sprouting, the wheat grain is protected by natural defense mechanisms like enzyme inhibitors and antinutrients on its outer layers. Both act basically like poison to predators (in other words, animals and humans)—though not fatal, they do prevent nutrient absorption and cause gastrointestinal distress. In fact, it’s because grains and legumes are difficult to digest, thanks to the presence of those antinutrients, that many people avoid eating them.

But, when grains sprout, they let down their defenses. After all, they’re going to turn into a plant, so they’re more safe, right? (Wrong, we’re still gonna eat them.) Studies show that not only is the antinutrient load reduced in sprouted grains, but the enzyme inhibitors are deactivated, too. And interestingly enough, sprouting partially breaks down the naturally occurring starches in grains, because the seed uses those starches to fuel the process. That means that overall, there are fewer dietary carbs in sprouted grains, which makes them a whole lot easier to digest, and better yet, more nutritious.

Enzyme inhibitors and antinutrients mess with the body’s ability to absorb nutrients, so when they’re out of the picture, it’s easier to get more of the good stuff from grains. Sprouting leads to significant increases in the levels of amino acids, proteins, fiber, folate, vitamin C, vitamin E, and beta-carotene.

That all means you can expect to notice a few differences when you start cooking and baking with sprouted flours. 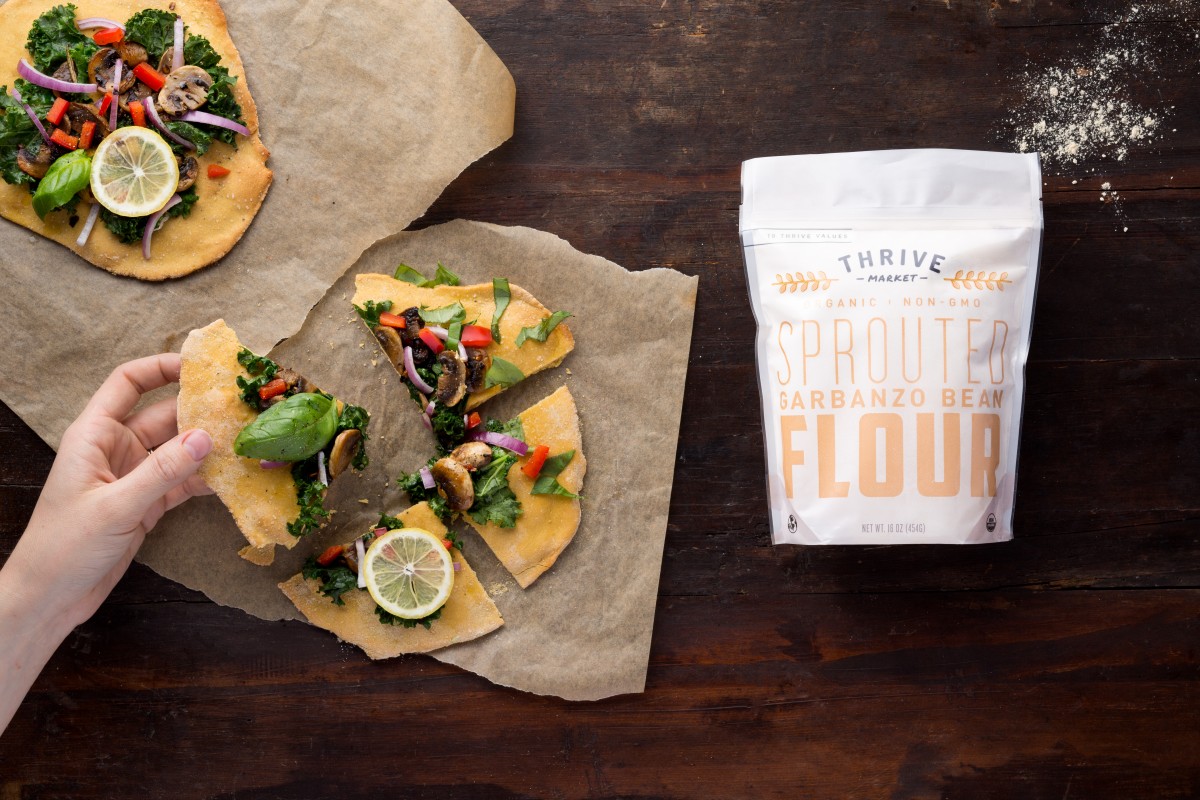 Because they contain fewer antinutrients and problematic enzymes, if you typically notice stomach pain or indigestion after eating wheat or grains, you’ll probably have better luck with sprouted flours.

Now your favorite chocolate chip cookies will have a little more protein, fiber, and vitamins. Though the minor uptake in nutrients probably isn’t enough to make you feel fuller or more satisfied, you can feel a little less guilty when you chow down on baked goods.

Wheat that’s been sprouted has been soaking in water, which means sprouted flours are a lot cleaner than factory-processed flours—mold, fungi, and dirt are much less likely to get ground into the product during the packing phase.

Anywhere between 70 to 80 percent of the wheat we eat is genetically engineered in some way. Thrive Market carries only non-GMO foods, and our new line of sprouted flours is no exception. All are certified organic and non-GMO, so you don’t need to worry about the side effects of “Frankenwheat.”

So now you know—sprouted flour won’t give you sprouted flowers, but it will make everything that you cook a little healthier, more wholesome, and most importantly, more tasty.