How Much Caffeine Is in the Average Cup of Coffee?

Coffee. The word alone brings a jolt to our hearts. A hearty warm cup can make Manic Mondays turn mellow and add some pep to the afternoon (especially when served in a waffle cone like this delicious treat). But, how much is too much?

Caffeine, the same ingredient that provides that must-have energy boost, can also lead to nervousness, loss of energy, and restless nights when overdone. There’s a lot of perk inside this little bean, but there are also a few ways to tame it so you can keep enjoying it every day.

No one is really sure of the exact moment coffee was discovered, but there are reports that the crop was used as far back as the 10th century in Ethiopia where it is believed to have originated. It wasn’t until the 15th and 16th centuries, though, that the beverage gained further popularity and spread worldwide as traders began shipping coffee beans over land and sea, and savvy entrepreneurs realized the lucrative business they could create.

The first coffeehouse opened its doors in Venice, Italy in 1645, and just a few decades later the idea had exploded across Europe to countries like England and France that became home to a few thousand establishments. When the brew finally made its way to American shores in 1720 (by way of the Caribbean), it even unofficially replaced tea, which was deemed unpatriotic to many residents after the Boston Tea Party events of 1773.

The popularity of coffee also made it ripe for other controversy. As cafés became a common place for people to convene and discuss politics and religion, King Charles II attempted to (unsuccessfully) outlaw English in 1675. The trend of coffeehouses as a social meeting hub carries on even today, though places like Starbucks aren’t nearly as “dangerous” as they once were.

Instead, coffee has become a major part of the global economy and is now grown in dozens of countries across multiple continents. Brazil leads the way in production, accounting for roughly 25 percent of the world’s total supply. The international industry overall creates a staggering $81 billion in revenue each year, and an average of 2.25 billion cups of coffee are consumed every day.

Few other things have become such a major part of our daily lives and have kept the economy bustling quite like coffee, perhaps because it’s easy to make and has great impact for the people that drink it.

The journey of the coffee bean

Because of the many different climates of major coffee producers—such as the warm foothills of Kenya, the volcanic soil of Guatemala, and the tropical islands of Indonesia—consumers are gifted with numerous selections when it comes to coffee.

Additionally, the different ways in which the actual beans are harvested from the coffee plant will directly affect the taste in every cup of Joe. Here are three common practices:

The dry process is the oldest method and is primarily used in Arabica coffees from India, Ecuador, and Yemen. With this method, coffee beans (which are technically seeds) are intact inside the cherry-like pit of the coffee plant as they are dried. As a result, the flavor becomes very bold and almost sweet. Some then go on to be roasted dark, which results in less caffeine per serving. The dry-processing method is rather difficult because producers run the risk of fermentation and must invest a significant amount of time to create the ideal product, which results in is a more expensive bag of coffee. But the amazing flavor and aroma reflecting the dedication is certainly worth it.

Another option is called the wet process, which involves stripping away layers of the cherry to reveal the bean without letting the crop sit out to dry for long periods of time. The coffee that is produced from this type of bean will not be as bold or full-bodied as other varieties. Rather this kind is referred to as a “light roast” and will yield a clean, bright taste that has notes of fruits. Brazil and Ethiopia use this method for producing specialty coffee, but typically in smaller proportions because it is a newer application.

This is known as the in-between, or semi-dry, process that has characteristics from both dry and wet cultivation. It generally has a sweeter flavor with a clean taste, a small amount of acidity, and varying levels of caffeine. The process involves drying out the fruit quickly, and it is only possible in places without much humidity such as Brazil, Costa Rica, and Nicaragua. Brazilian coffees made using the pulped process have won many awards for their amazing balance and complexity.

There are many factors that determine the amount of caffeine in any cup of coffee. Concentrations can vary depending on where the beans were grown and cultivated, processing methods, and the many blends for sale that combine different types. Not to mention adding water, milk, or cream can dilute coffee. However, assuming that your standard serving size is an 8 oz. cup (multiply as necessary), your mug will contain an average of 95 milligrams of caffeine according to Mayo Clinic. Here’s a closer look:

It is recommended that individuals keep caffeine intake below 500 milligrams a day. A good rule is to abstain from the bottomless cups and limit your regular coffee to four servings at most so you can avoid the “jitters” and instead take in the many positive effects that come with drinking the popular beverage. 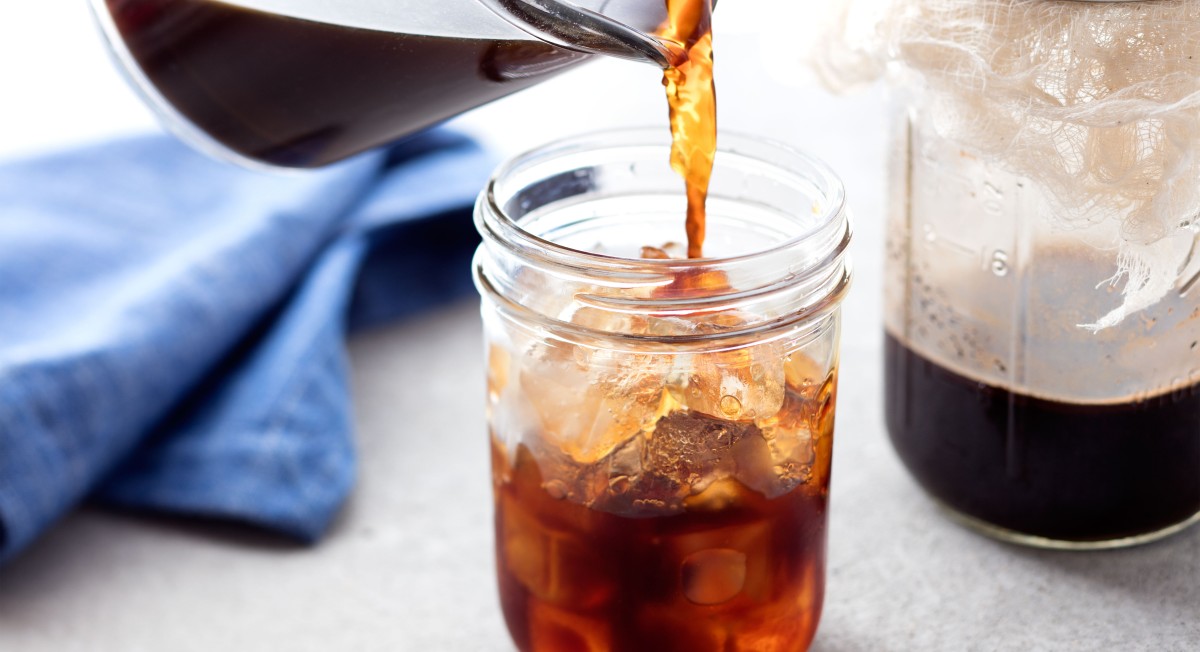 Coffee has been the focus of many lifestyle studies as of late, which have so far yielded promising evidence that drinking it can actually contribute to multiple health improvements. One report by the Harvard School of Public Health found that those who drink three to five cups per day were 15 percent less likely to die prematurely. The National Cancer Institute had similar research findings that said coffee drinkers generally live longer. Here’s what else this powerful brew can do:

Most experts agree that additional research needs to be done to uncover the long-term effects and lasting health benefits of coffee. However, these preliminary studies show good signs that it can aid in living well when enjoyed in moderation.

Controlling the caffeine in coffee

Moderation, though, is a key word when it comes to coffee. Although the average of four cups per day can have great health benefits, getting three quadruple-shot lattes will actually have the opposite effect. Not only does it result in a big crash by the end of the day, but there are other more serious side effects that can occur. One Harvard professor found that consuming too much French press coffee in particular can increase cholesterol levels. Other risks include:

But this doesn’t mean you have to give up the good stuff. In addition to reducing the actual amount you drink, you can also try these tips to control the caffeine:

Add more water. One foolproof way to balance the amount of caffeine is by adding some hot water to the mug. Start by filling 3/4 of the cup with full-bodied coffee grounds, and then add hot water to fill. Some dark roasts may be so bold that you can adjust the mixture to half coffee, half hot water.

Dilute with decaf. Adding more water is a simple trick, but some might find it flavorless and watered-down. This is where decaf coffee can save the day. Most varieties of coffee are available in decaf with virtually identical flavors. Mix your coffee grounds to include equal amounts of both types, which will effectively cut back on the caffeine while still providing the full-bodied taste you enjoy.

Try a coffee substitute. There are a number of amazing alternatives that can give you the same great taste of coffee without the big doses of caffeine. Even if you need to start the morning with a cup of regular coffee for a jolt, switch it up later in the day with this French roast herbal alternative that replicates the flavors and aroma of real coffee beans, sans caffeine. Or you can try mushroom coffee that relies on cordyceps for energy and reishi’s relaxing properties. This recipe for a caffeine-free dandelion cacao latte is another option to get the same great taste of coffee without any buzz. Or you can just eat foods that give you energy instead.

Good to the last drop

It’s pretty amazing that the simple beverage we enjoy every day has such complexity and history behind it. Coffee is about as diverse as the countries that it comes from, and there’s a lot to learn a lot about your favorite blends by examining the roots that brought it from the field to your home. Some experimentation may be needed to create an ideal mixture (try our 30-second instant iced coffee recipe and this easy three-step process for making cold brew, too), but any way you like it, there are many good reasons to drink up.