Thrive Tries It: Here’s What Happened When 2 Friends Went Vegan for 2 Weeks

The savory aromas of carne asada and carnitas wafting throughout Los Angeles were enough to get me to abandon my own ethics in 2006. My four-year stint as a vegetarian deeply entrenched in the fight for animal rights dissolved in a haze of endless $1 tacos.

It all started when, as a teenager, I discovered the truth about factory farms. The image of animals being mistreated and slaughtered for food didn’t make sense to me, and I knew wholeheartedly that for me, fried chicken, as much as I loved it, wasn’t worth it. But I was raised on Filipino cuisine, which is basically meat, rice, and more meat, so the switch was no picnic. Frequently ridiculed for my unconventional diet at family gatherings, I sometimes even went hungry—not because my relatives were cruel, but because they didn’t quite get it. I stuck to my guns, though. That is, until I moved to LA, and taco trucks rolled into my life.

After several indulgent years of eating all the meat, I realigned with my vegetarian lifestyle a couple years ago, and it just felt right. So, last month I challenged myself to go all the way and go vegan—for two weeks at least. Fortunately, I wouldn’t be in it alone. My friend and fellow Thriver Catherine Manzanares would join me. 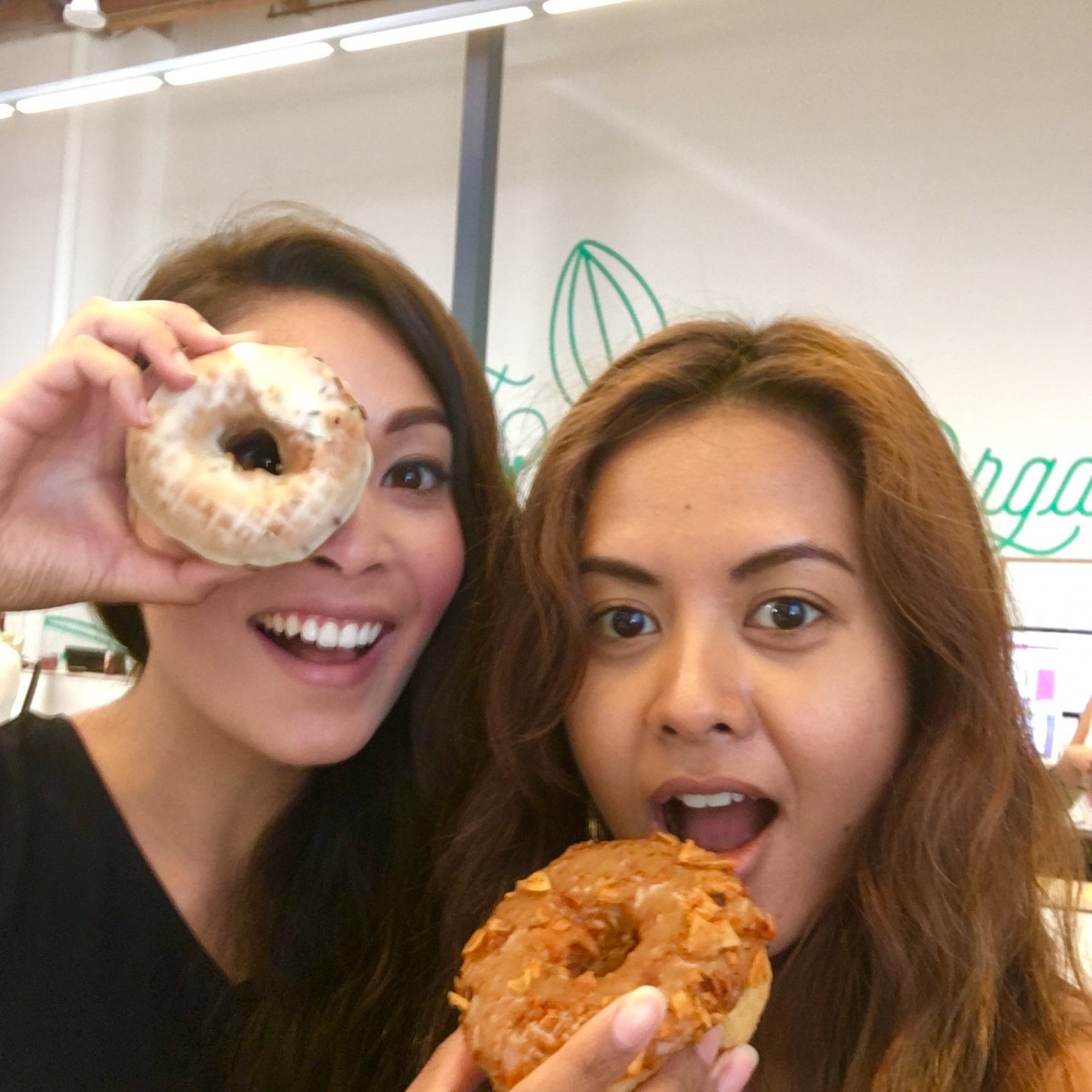 This wasn’t my first rodeo, but my last attempt at going vegan was a bust. I was in college, and relied on an embarrassing amount of soy “meat” and simple carbs like white rice and bread. Because I didn’t grow up eating vegetables, I pretty much shunned them. As a result, I felt sick and malnourished and started to think the diet wasn’t healthy or sustainable. But eventually I matured into the veggie lover I am today, and protein sources like lentils and quinoa have become beloved staples in my meals. I told myself: I don’t need no stinkin’ cheese, eggs, or even honey. Veganism would be a breeze.

I even found myself choosing healthier options out of necessity, rather than indulging in whatever I wanted (read: pizza).

To be honest, I was afraid giving up meat and dairy for the first time would make Catherine, a bona fide carnivore before this experiment, hate life. She also loves dining out: “Work dinners and friend dinners keep me away from the kitchen 90 percent of the week,” she says. This girl is toast, I thought. 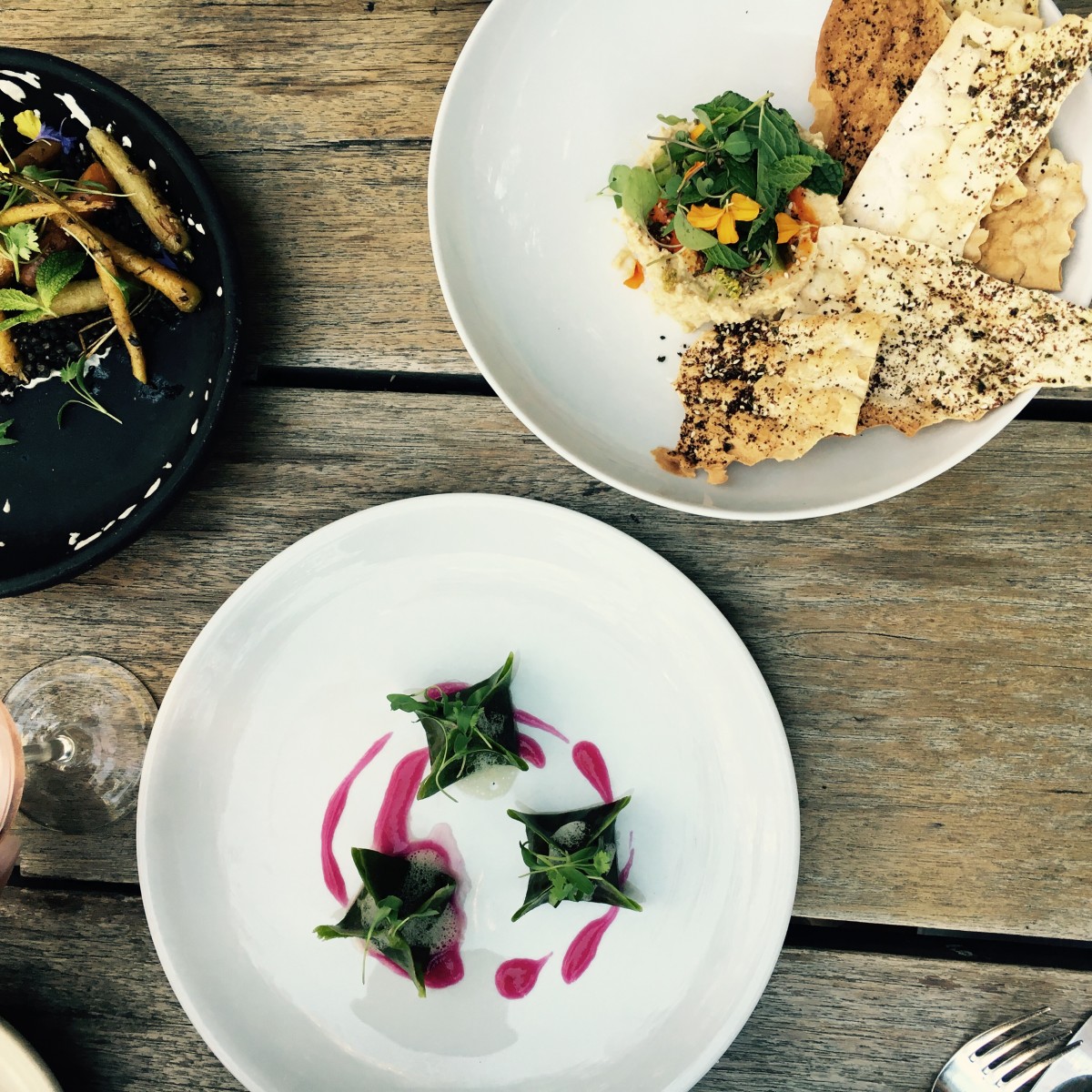 From veggies sautéed in butter to anchovies hidden in salad dressing to egg-based aioli smeared on sandwiches, animal products can lurk anywhere. You have to be conscious of everything and sometimes ask a dozen questions before choosing something off of a menu. Servers might roll their eyes at you—that happened to me when I inquired about vegan beers. But it’s OK—that’s what Google is for. PETA offers lots of valuable intel that Catherine and I each referred to whenever we had unanswered questions. All the extra effort might seem like a pain in the butt, but it feels pretty great to know exactly what’s in your food. I even found myself choosing healthier options out of necessity, rather than indulging in whatever I wanted (read: pizza).

“I toughed it out and just watched my mom swallow down her luscious nigiri while I was crying inside.”

At home, eating vegan was a cinch, and a good excuse to experiment in the kitchen. Handmade sushi rolls packed with avocado, carrots, cucumber, and baked tofu marinated in coconut aminos were impressive, if I do say so myself. When I whipped up this mind-blowing cauliflower rice with falafel instead of salmon, my confidence was palpable. My boyfriend, the go-to chef in our household, even suggested that I should take the reins more. Turns out I can cook, guys. 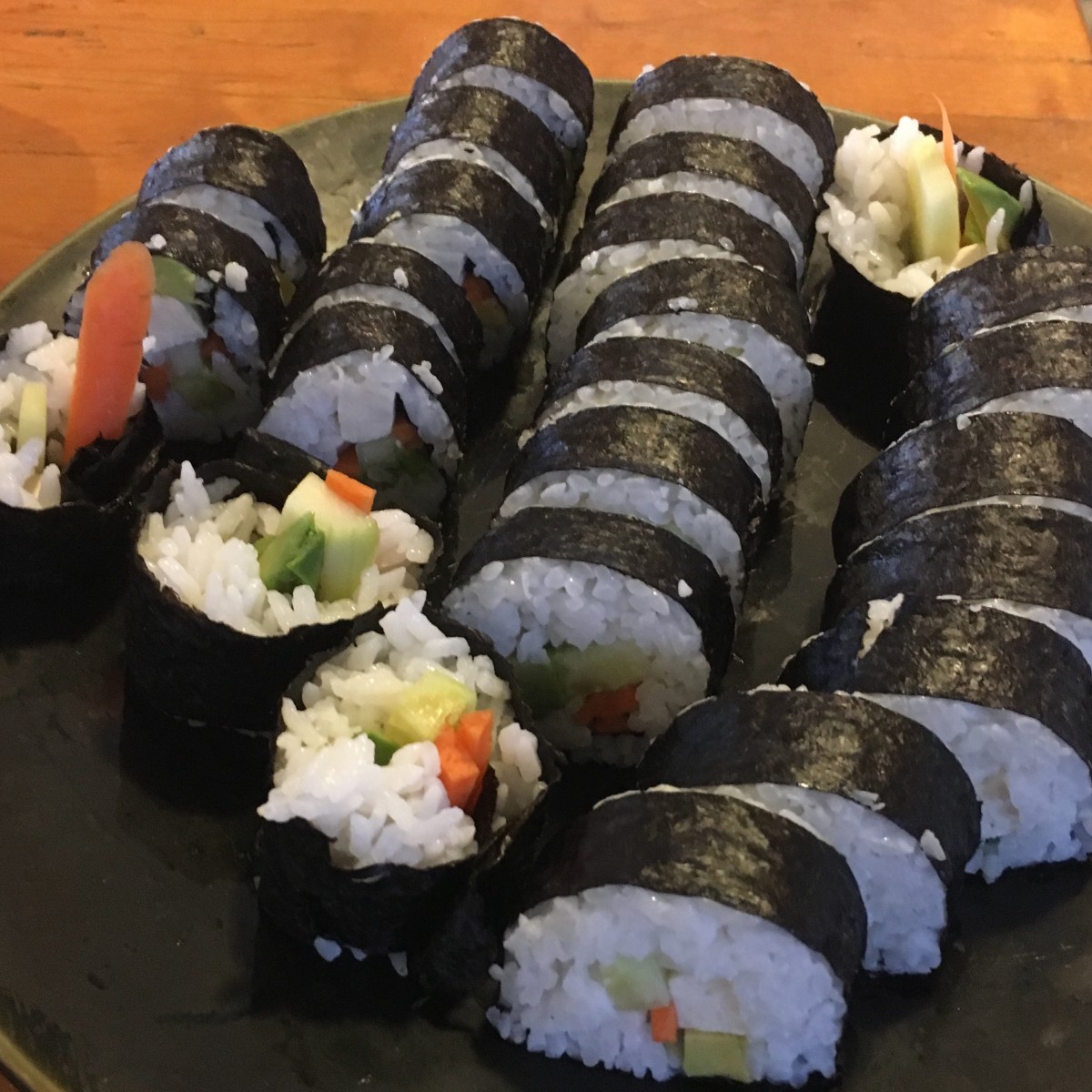 Catherine kept it simple yet satisfying at home: “Most days I sautéed some vegetables and put them over a bed of greens with a splash of apple cider vinegar and a dash of pepper.” She was breezing through these two weeks like a champ, but it wasn’t always easy. “My mom and I ate at a Japanese restaurant and it took everything in my being to not order sushi. I thought, ‘Oh, one moment of weakness won’t hurt me—sushi is so small anyway!’ But I toughed it out and just watched my mom swallow down her luscious nigiri while I was crying inside.”

My vegan buddy’s vigilance was inspiring. Every time she sent me a photo and recounted her foodie adventures about town, it was so cool to see her exploring a whole new way of eating. She even texted me these words of encouragement while I was stuck at a party with nothing but tacos and quesadillas oozing with ooey-gooey cheese: I believe in you!!!

We knew we were basically on our own when it came to treating ourselves. One day when our team broke bread with bagels and cream cheese, we splurged on vegan donuts for ourselves—maple glaze with coconut “bacon,” and lavender cake drenched in orange blossom glaze. As Homer Simpson would say: “Mmm.” At the end of the two weeks, we celebrated with an amazing vegan dinner at a Venice, Calif. restaurant called Plant Food + Wine, followed by a very convincing scoop of coconut cream ice cream from a fancy truck that appeared in front of us, as if by fate. 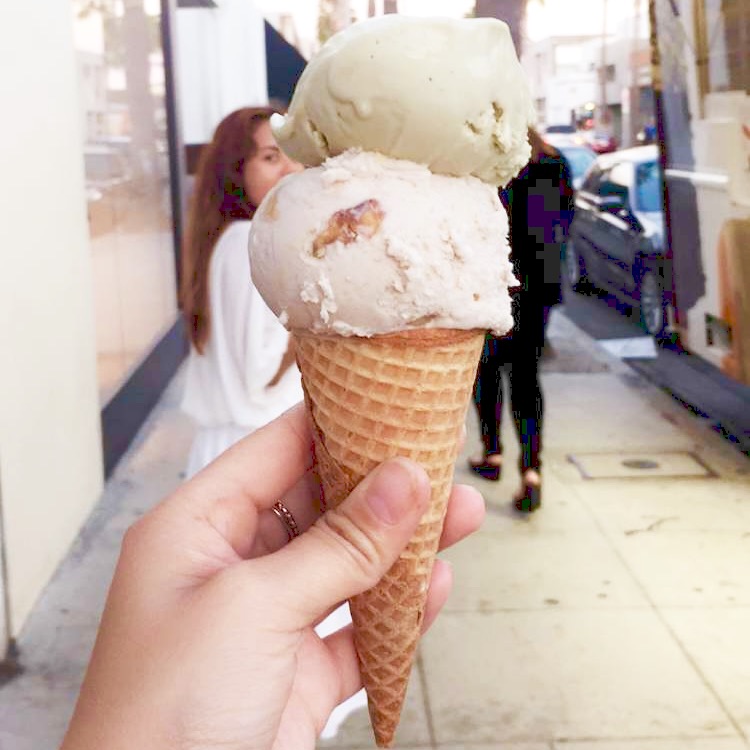 For two people with very different diets and routines, we were both pretty amped on veganism. “My skin was the best I’ve seen it in years!” says Catherine. “I also noticed some slimming down, mainly because I didn’t ever feel bloated. And I had way more energy in general—my regularly scheduled after-lunch food comas were rare.”

My skin and my belly were so thankful for the full dairy detox and the incidental increase in vegetables and fiber in my diet.

The biggest takeaway for both of us was a growing consciousness about what we were putting into our bodies. “My diet was pretty awful prior to the switch,” Catherine confesses. “Free donuts at work? On it. Popcorn and loads of butter at the movie theater? Duh. A Korean BBQ feast whenever a friend has a craving? Count me in.” And just because I had already given up meat a while ago, doesn’t mean I wasn’t prone to some of the same temptations—if there’s ice cream in the freezer, you best believe I’ll have at least a spoonful a day until it’s gone. I’m also still dreaming of the day I’ll eat my favorite buttercream-frosted vanilla cake again. But as Catherine says, “Eating vegan helped me set some boundaries for myself.” Ditto, sister.

My skin and my belly were so thankful for the full dairy detox and the incidental increase in vegetables and fiber in my diet. And my ethical eating journey that started 15 years ago has come full circle. I’m planning to stick to my new vegan lifestyle for a while, maybe for life. As for Catherine: “I’ll be cooking vegan-friendly meals whenever I possibly can—but no, I’m never giving up sushi.”

Thinking about going vegan? Start here:
What Is a Vegan?
Vegan vs. Vegetarian: What’s the Difference?
Going Vegan? 7 Things You Need to Know
The Beginner’s Guide to Meat-Free Protein
7 Ways to Get Your Protein Fix on a Vegan Diet
How to Get Enough Iron and B12 on a Vegan Diet

Dana PobleteDana's love for all creatures under the sun (bugs, too) drives her in her advocacy for ethical eating, environmental sustainability, and cruelty-free living. A natural born islander, she surfs when she can, and writes, always.