The nutrition facts on the back of packaged foods have been the butt of jokes for years. You practically need a calculator to figure out how much sugar you’re eating, let alone figure out who what those “percent daily values” really mean.

The Food and Drug Administration must have been listening, because today, it announced a long awaited update to the black and white chart—and it’s a total game-changer for anyone trying to eat healthier.

As First Lady Michelle Obama said in a release, “this is going to make a real difference in providing families across the country the information they need to make healthy choices.”

Though the overall look and style of the label remains the same, the updates will make it much easier to understand. Here’s a rundown of the six biggest changes. 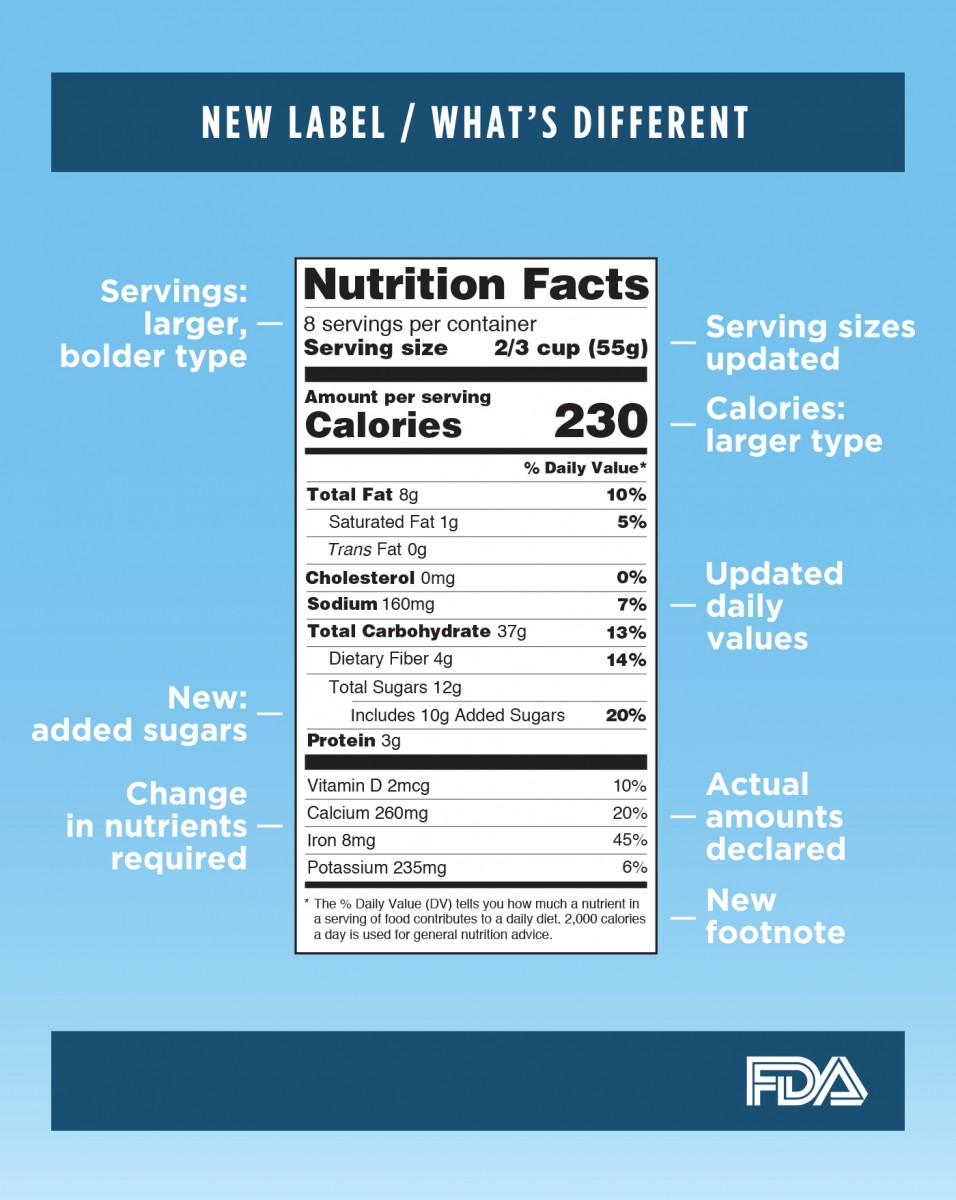 The most obvious change to the new labels—the calories and servings sizes are in a much larger, bolder font, so those numbers stand out.

This update includes a few big changes to serving sizes. First, the FDA now requires serving sizes to more closely reflect the amount people actually eat. In other words, a 5-ounce cup of yogurt can no longer list a serving size of 3 ounces.

Similarly, multi-serving foods will now have to list both “per serving” and “per package” nutrition facts on a two-column label. Think about a pint of ice cream: Now, it will tell you how many calories are in one 1/2 cup serving and the whole package.

On the current label, it’s nearly impossible to differentiate between naturally occurring and added sugars. You can look at the ingredients list, but since sugar can hide under a plethora of different names (like maltodextrin and evaporated cane juice), it can be hard to spot. No longer—the FDA will now require manufacturers to list both total and added sugars.

Advocates say this is a critical step in helping Americans make healthier choices. For instance, it’ll be much easier to tell whether canned peaches are naturally sweet, or have been pumped full of high-fructose corn syrup. Not everyone is pleased, though. The Sugar Association, an industry group that represents most sugar producers, has already gone on record opposing the changes and has even suggested that they might be illegal.

The new label will update the percent daily values of vitamin D, sodium, and dietary fiber to be consistent with the most recent Dietary Guidelines for Americans. It also lists the gram amounts of vitamin D and potassium, two nutrients many people don’t get enough of. Meanwhile, vitamins A and C will no longer be required, as deficiencies aren’t as common anymore.

5. Drops “calories from fat” to put more emphasis on types of fat

Manufacturers will also no longer have to list the “calories from fat,” because research shows that the type of fat, not the amount, is what matters (total fat, saturated fat, and trans fat will continue to be required). This comes after a reversal in thinking about fat—though it was demonized for years as unhealthy, experts now emphasize the importance of healthy fats as part of a balanced diet.

Most manufacturers will have to adopt the new labels by July 26, 2018, though companies with less than $10 million in annual sales will have another year to comply.

Bottom line: No matter what diet you follow, this update will make it way easier to understand what’s in your food—and make healthier choices.

Infographic courtesy of the Food and Drug Administration