When we set out to create Thrive Market Organic Vanilla Extract, we wanted to make sure it delivered on quality, price, and—most important—taste. Read on to discover vanilla’s rich history, how we’re transforming the supply chain, and why this flavor-filled bottle deserves a spot in your pantry.

A Brief History of Vanilla

Considered the world’s most popular flavor, vanilla’s distinctive taste has enticed people for centuries. Its story begins more than 900 years ago, when the Totonac people cultivated vanilla orchids in tropical regions of Mexico and Latin America. From there, vanilla spread to the Aztecs and Mayans.

Later, it caught on with European colonists, who introduced it to French-occupied Bourbon Island near Madagascar (hence “Bourbon vanilla”.) After much trial and error, the colonists discovered that vanilla orchids could only be pollinated by the Melipona bee, a species that only exists in Mexico. So, in order to grow vanilla in other tropical regions beyond Mexico, they had to hand-pollinate the flowers. Even more challenging? This labor-intensive process had to take place within a 12-hour window when the vanilla orchid was blooming, which only happens once a year. 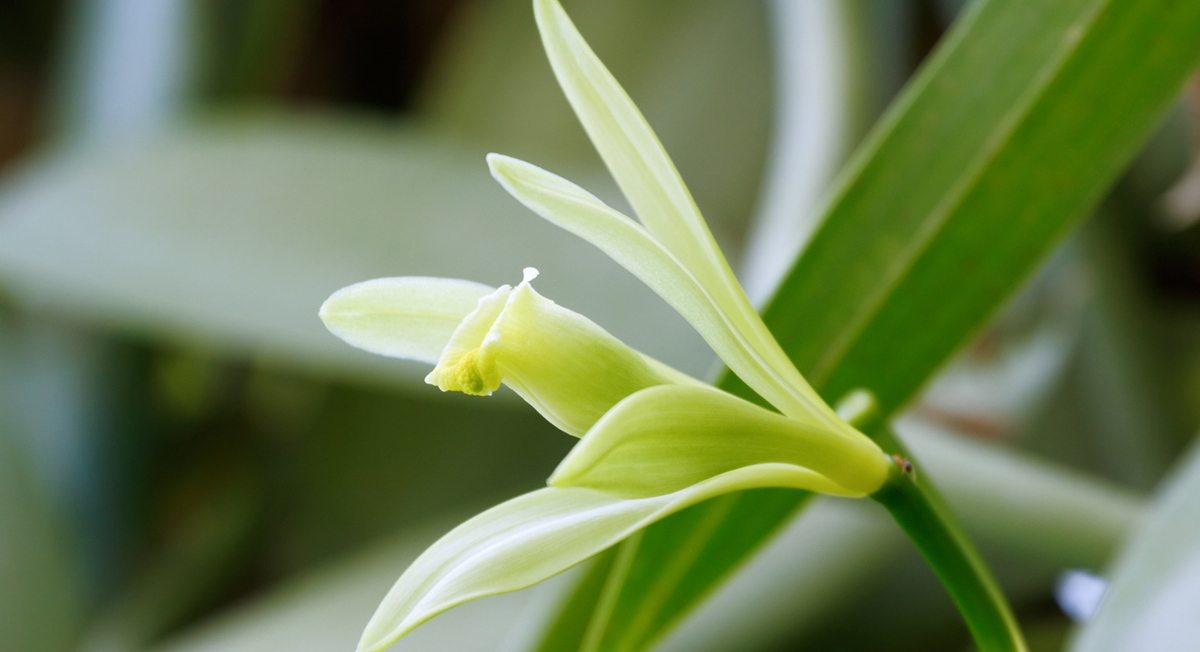 Why Is Vanilla So Expensive?

Today, the majority of vanilla orchids are hand-pollinated, and that time-consuming labor plays a big role in the price of good vanilla. So, if you’re seeing vanilla for sale at a price that seems too good to be true, it probably is. Many of the versions sold in grocery stores are actually imitation vanilla; they don’t contain any actual vanilla, but instead consist of a mixture of synthetic chemicals. To be sure you’re getting the real deal, read the label carefully. A bottle of authentic vanilla extract in the U.S. is regulated by the FDA and has a specific ratio of water to alcohol to vanilla beans—and nothing more. Check the label to ensure there are no additional ingredients. Most genuine vanilla extracts will also state the origin, which is another way to confirm you’re getting a top quality product.

Our Organic Vanilla Extract is ethically sourced from the island of Madagascar, where a local co-op of farmers cultivates high-quality Bourbon vanilla beans. This represents a shift away from traditional vanilla supply chains, which often involve numerous countries and middle men, plus limited visibility into sourcing and production processes.

“Most vanilla extracts on the market are typically made from a blend of vanilla beans sourced from multiple countries. Ours is single-origin, which means we have more control and traceability over the supply chain.”—Erin Shulman, Thrive Market Goods Product Innovator

From harvesting beans to bottling, every step of the process is based on what’s best for people and the planet. Vanilla orchids are grown using sustainable farming techniques, and once they bloom, farmers hand-pollinate the flowers with a toothpick-sized stick. Soon after, a green pod begins to form. Similar to how ranchers brand cattle, vanilla farmers “tattoo” the pods with markings to claim ownership and prevent theft. 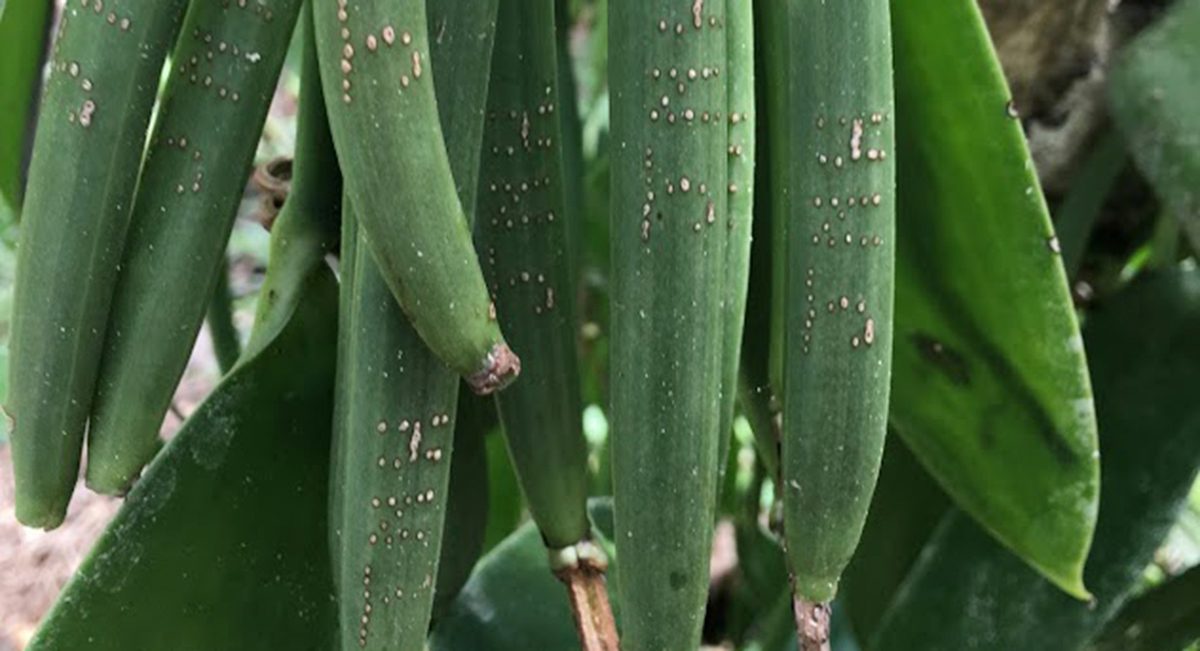 After approximately nine months of growing, the beans are harvested, washed with hot water, and placed on drying racks. Farmers rotate the racks between sun and shade for several months until the beans have shrunk about 20 percent from their original size. Next, the beans are shipped to the U.S., where they undergo a special extraction process by a team of vanilla experts in a wind-powered facility. Our partners participate in the Green Energy Program, which allows them to purchase clean, renewable wind energy to power the vanilla processing facility. 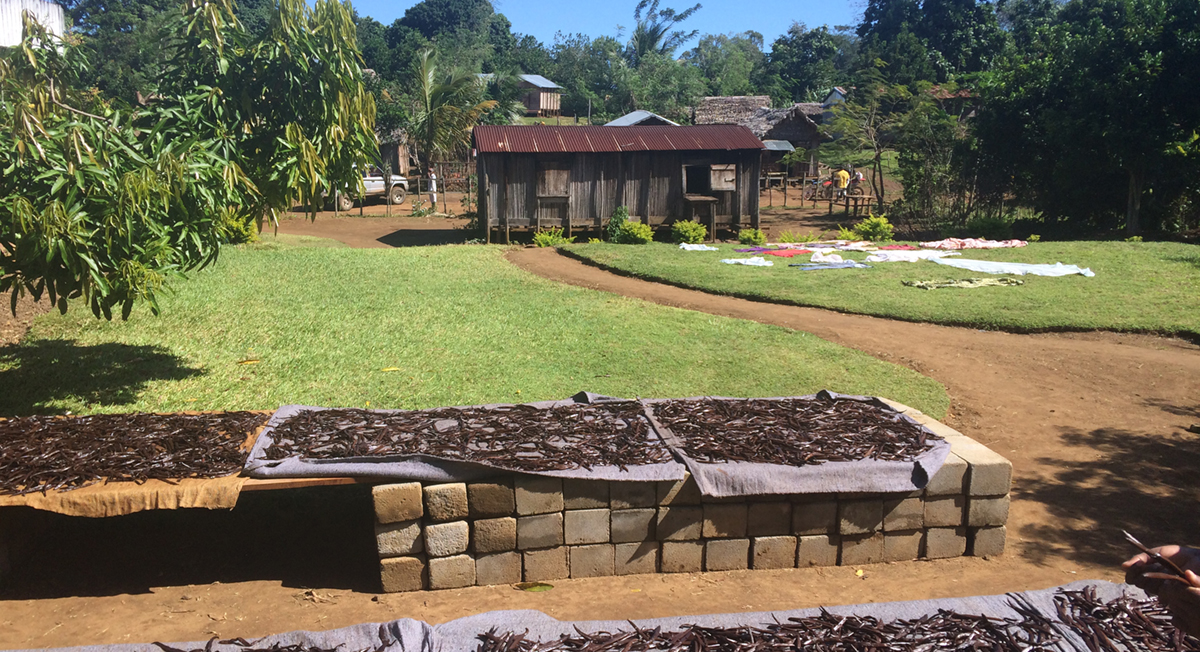 The final product has an incredibly rich and distinctive flavor that lends itself beautifully to baked goods and savory sauces. Plus, it comes in an eco-friendly bottle made from recycled plastic. Pro tip: Store the bottle in a cool, dry, and dark place to increase the shelf life of your vanilla. 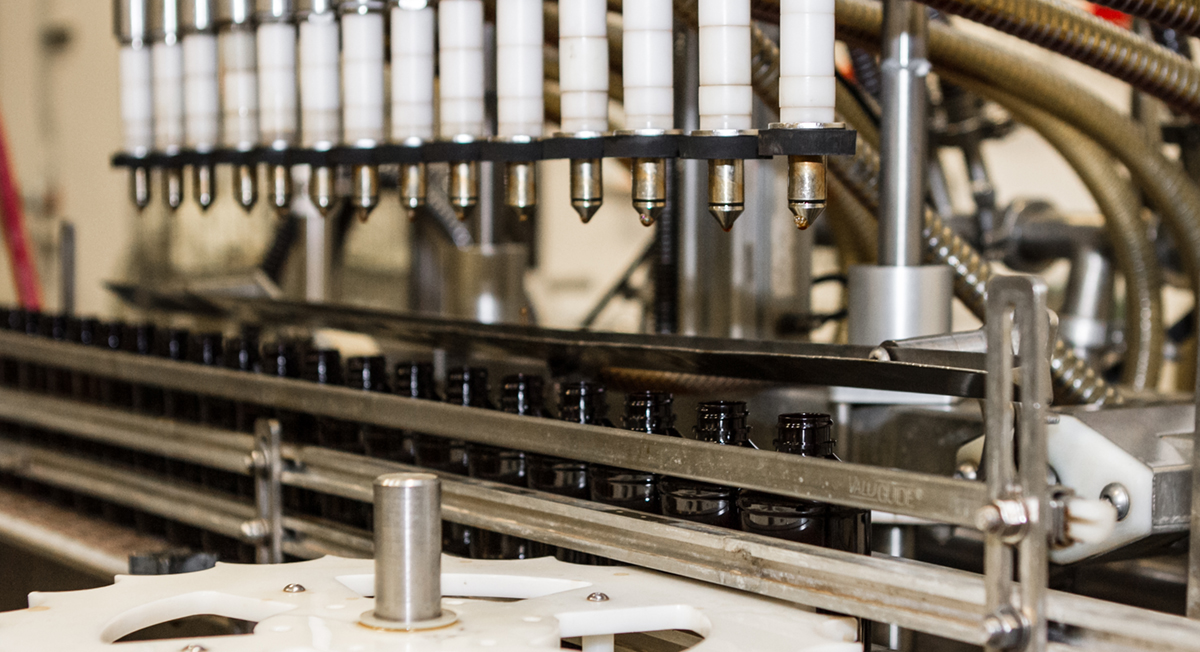 Our vanilla supplier works with Sahanala Madagascar, an employee-owned co-op that gives 100 percent of its profits back to its 3,700-plus vanilla farmers. This partnership not only ensures farmers are making a fair wage, but also works to preserve the environment. 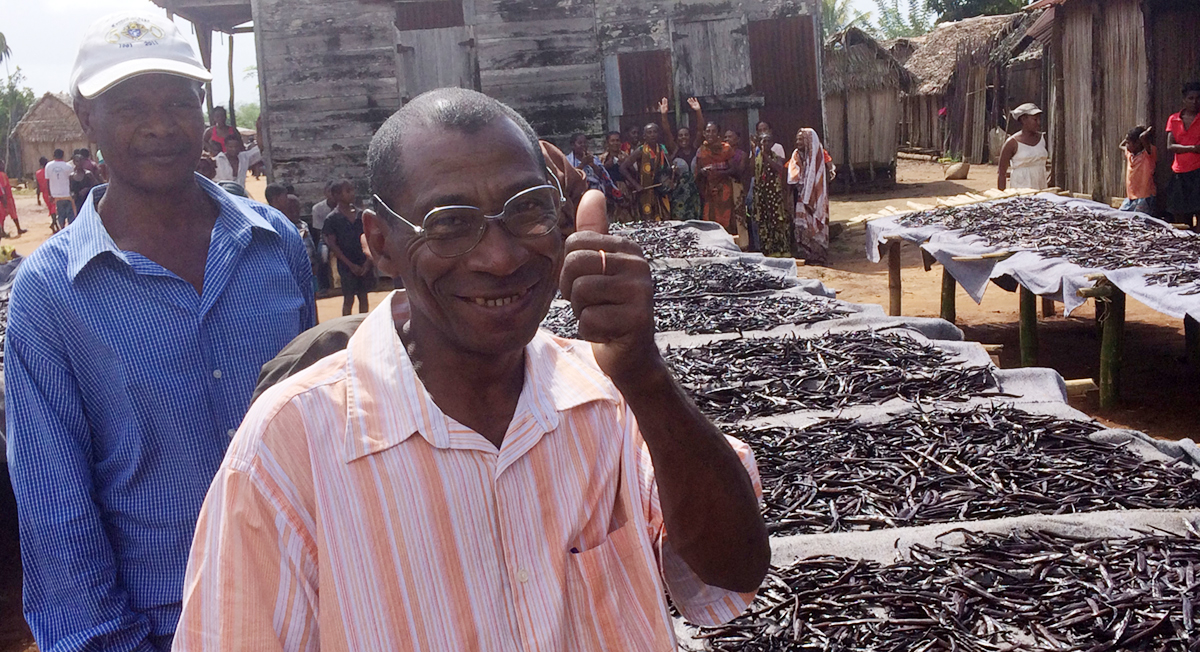 “It was very important for us to find a vanilla supplier that met our strict standards of ethical and sustainable sourcing. In a vulnerable country like Madagascar, we wanted to be sure farmers were being treated fairly and given equal opportunities. The Sahanala program really goes above and beyond.”—Erin Shulman, Thrive Market Goods Product Innovator

Farmers are given technical support, along with educational resources around sustainable agriculture to increase crop yield and biodiversity. In addition, farmers and their families are provided with medical care, food, clean water, a pension fund, and continued education. The program has even built a school for the community’s children, ushering in a new generation of prospering vanilla farmers. 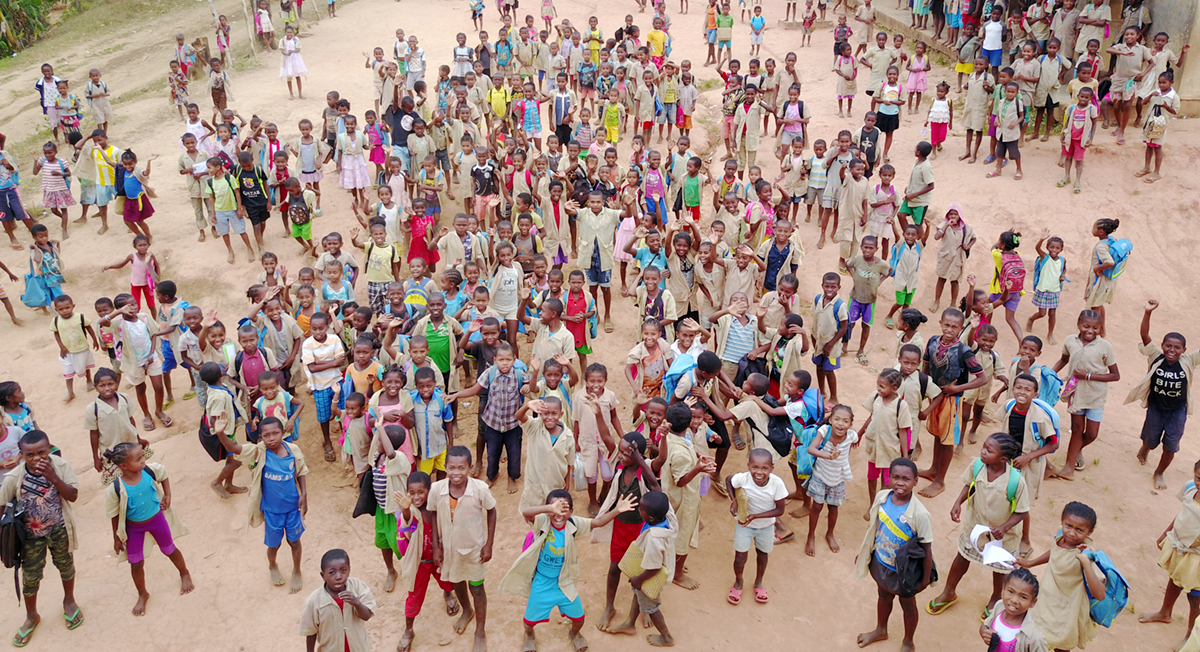 From lattes to cupcakes, these recipes benefit from vanilla extract’s delicate, sweet flavor. Here are some tasty options you can whip up in no time!

If you can’t start your day without a morning buzz, elevate your brew with this 5-minute latte. It’s blended with creamy oat milk and vanilla, and sweetened with maple syrup. A sprinkle of warm cinnamon is the perfect finishing touch, whether you linger over your cup or take it to go.

When fall is in the air, it can only mean one thing—the pumpkins are coming! Get your spice on with seasonal favorites like cinnamon, nutmeg, and cloves, all mixed up with gluten-free and paleo-friendly ingredients. Plus, we made a few wholesome swaps like using maple syrup instead of cane sugar, and coconut oil instead of butter.

Hot cross buns are traditionally made with currants or raisins and known for their distinctive cross-hatch design. They’re also usually loaded with sugar, white flour, and other not-so-paleo-friendly ingredients. So, we put together a recipe that relies on a trio of gluten-free flours, coconut sugar, and warm spices for a paleo version that’s just as satisfying as the original.

We’re over the moon for this dreamy lavender and vanilla concoction that’ll have you feeling extra relaxed, thanks to a dose of CBD oil. (New to moon milk? It’s an ancient sleep remedy traditionally made with warm milk.) Tip: Keep the pantry-staple ingredients handy so you can blend this up anytime in 10 minutes flat.

Two surprises are hiding inside these cupcakes: a juicy raspberry tucked into the center, plus a scoop of lemon- and raspberry-flavored magnesium powder. You get an extra dose of an essential element your body needs to function properly, all wrapped up in a sweet treat.