The word “vegan” doesn’t exactly conjure up images of indulgent, luxurious, over-the-top food—especially when it comes to desserts.

Typically, those classifications are reserved for dishes that pull out all the stops, with massive quantities of butter, heavy cream, and eggs.

But, these 25 vegan desserts flip that idea on its head.

There’s not a smidge of dairy, or any other animal product, in any of these recipes, yet just one bite will prove that vegan desserts can be as wonderful as the more traditional options. From baked goods to frozen treats and more, here’s how to still enjoy the best meal of the day.

It’s possible to enjoy all the baked goods you love even on a vegan diet. You just need a little creativity, a few unusual ingredients, and these six recipes. Fluffy cakes, fudgey brownies, and chewy cookies are all on the menu—without the eggs, butter, or milk, of course.

This recipe could double as a science experiment. Instead of using eggs, this cake relies on a chemical reaction between baking soda and vinegar, which propels the dough to rise (kind of like those DIY “volcanoes” that are so popular at grade-school science fairs). Not to worry, though—the rich chocolate cake doesn’t taste like vinegar at all, but rather like a decadent, light-as-air gourmet dessert.

Because the recipe calls for fruit, oatmeal raisin cookies somehow became the “healthy” dessert served in elementary school cafeterias and grandma’s kitchen—but most are not exactly good for you. This version, however, uses coconut oil and maple syrup instead of butter and sugar, which actually does make them a more nutritious cookie.

Few cookies can rival the classic chocolate chip, but this one might be the exception. Swapping in hazelnut meal for flour not only makes the recipe gluten-free, but also adds an irresistible nuttiness to the final result. Instead of chocolate chips, chop up your favorite bar of dark chocolate to aid an air of sophistication.

There’s a good reason this batter is so thin: it spreads in the oven, allowing the edges of the cookies to crisp up to golden perfection (though the middle remains delightfully chewy). Warming spices like cinnamon, ginger, and cardamom give the batch some fall flair.

These brownies are so fudgy, you’d swear there has to be an egg somewhere. The secret? Flaxseeds. When mixed with water, they form a sticky and versatile replacement. Medjool dates give the batter all the sweetness it needs, and raw cacao powder really kicks up the chocolate flavor.

At first, the ingredient list for this recipe might seem a little daunting. Quinoa flour? Unsweetened applesauce? Sweet potato puree? But, everything has a purpose, and it all comes together beautifully in the end. The quinoa flour keeps things gluten-free and adds some protein while the applesauce sweetens the batter just slightly, and the sweet potato puree turns the frosting super fluffy. Once you take your first bite, you’ll forget all about the unusual ingredients. 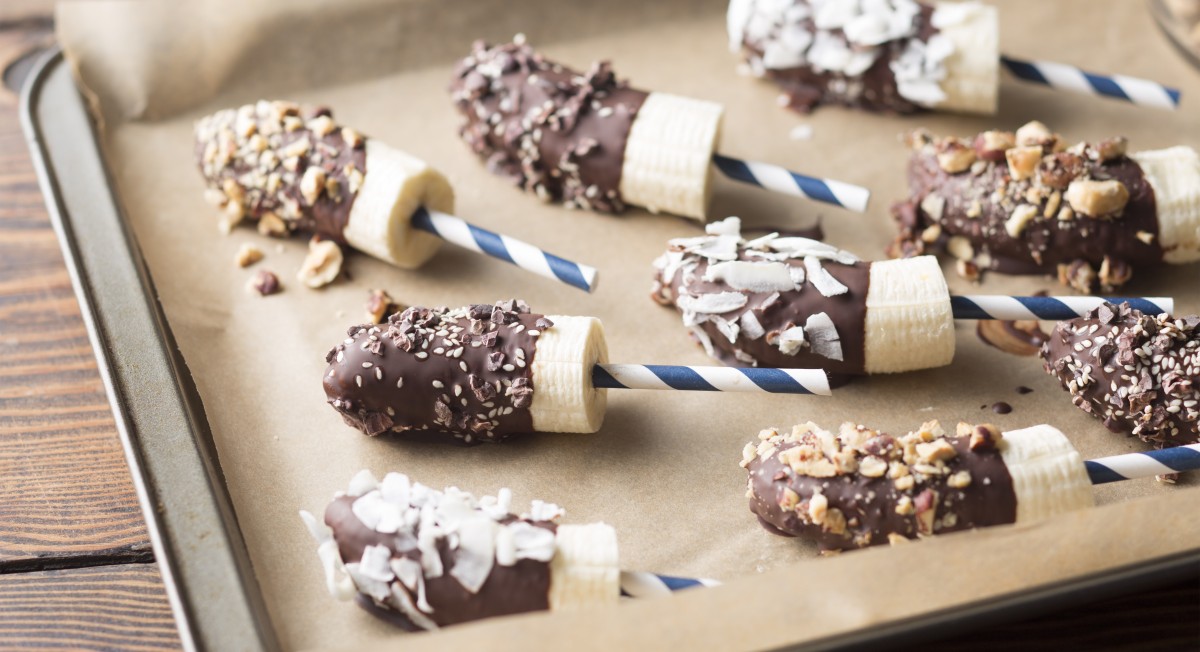 Frozen desserts—ice cream, semifreddo, and even cheesecake—lend themselves particularly well to vegan preparations. The freezer helps firm up dairy-free fillings that might otherwise melt, opening up a whole new world of creative possibilities. We’ve also included a few more traditional frozen treats, like popsicles and frozen bananas, for the purists out there.

Frozen bananas couldn’t be simpler to make, or more refreshing on a hot afternoon. Dip them in a vegan chocolate coating made from coconut oil, maple syrup, cacao powder, and vanilla, then add whatever toppings you like—cacao nibs, dried coconut, and sprinkles all work well.

The classic Italian dessert semifreddo has a texture somewhere between mousse and gelato, and luckily, it’s a cinch to recreate without dairy. This recipe calls for three layers of vegan ice cream—in chocolate, almond, and banana flavors—which create stunning stripes in the finished dessert.

Most plant-based eaters have heard of chia pudding—but have you had it in popsicle form yet? The thick, creamy texture stays the same—and even better, the popsicles won’t drip as much as other fruit-based options. Combining the coconutty pudding with blueberries blistered in balsamic vinegar creates a wonderful depth of flavor.

Technically, this dessert is neither “cheese” nor “cake,” but it’s so tasty, it doesn’t matter. A light, creamy chocolate filling balances out the salt in the gluten-free almond crust and date caramel layer. Even non-vegans will go nuts for this dessert.

The beauty of this vegan ice cream is that there’s no churning required. Chilled coconut milk firms up well in the freezer all on its own, eliminating the need for the ice cream machine. For those that like their desserts extra chocolatey, our recipe calls for lots of cacao powder with a salty-sweet date caramel sauce to balance it out. 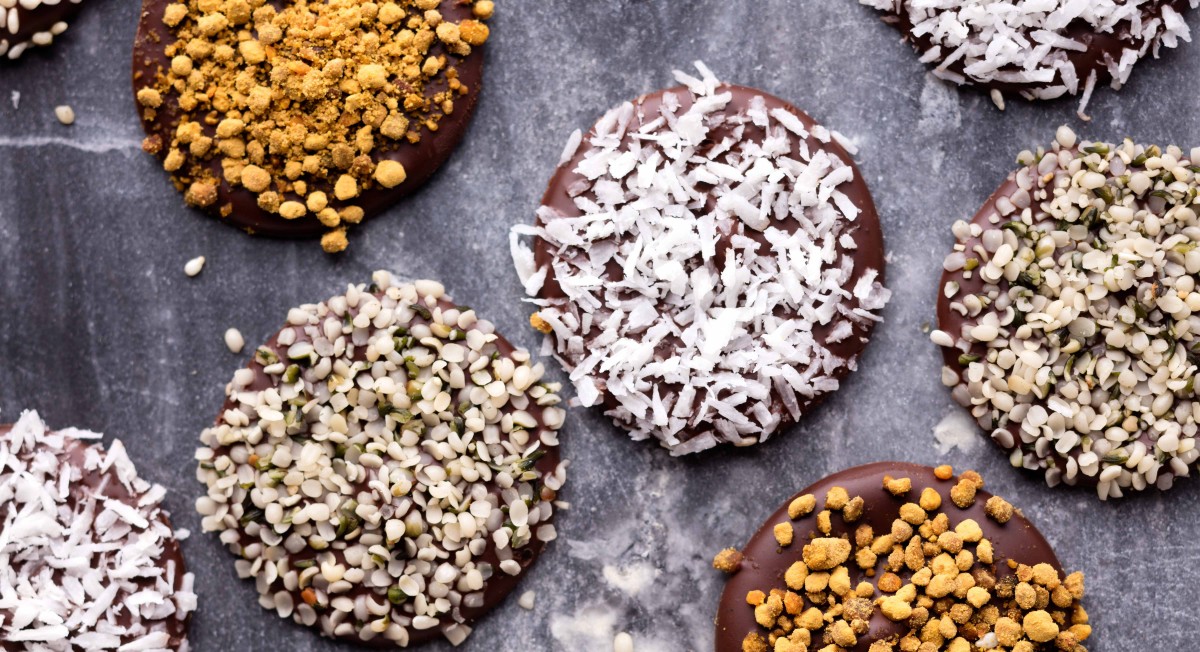 Chocolate and other confections

Lucky for you, many candies are already vegan—so usually there’s no need to adapt the recipe. The one exception, of course, is chocolate. Unless you’re going for a 100 percent cacao bar, it most likely has some milk in it to lighten up the flavor. To satisfy a craving, try one of the seven recipes for dairy-free chocolates, candies, and other confections.

Naturally sweet dates could pass for candy all on their own, with a deep molasses flavor and chewy texture. Stuff them with nuts seasoned with cinnamon, ginger, and cayenne, and things get really interesting. A dark chocolate coating brings yet another layer of flavor.

Finding vegan chocolate at the grocery store can be tricky—most bars lighten the intense cacao with milk. Instead, try making your own from cacao powder, coconut oil, and maple syrup. It has a slightly lighter texture than store-bought chocolate, and making the bars at home allows you to customize them with whatever fillings you like.

Candied ginger and dark chocolate just might be a match made in heaven: The potent zing from the ginger, a mellow richness from the chocolate, and an add-on of orange zest will make mouths melt. These truffles are also portable, so you can stash a few in your purse or bag, and you’ll be happy you did when your sweet tooth starts nagging.

Think of these three-ingredient candies as an upgraded version of the puffed-rice chocolate candies that are popular around Halloween. Heating raw quinoa in a dry pot pops the seeds, just like popcorn, for the exact same texture as puffed rice, but with extra protein.

Sno Caps—dark chocolate buttons covered in white sugar beads—have long been a favorite movie theater candy. Their crunch and decadent chocolate flavor make them pretty hard to resist, but for an even tastier version, switch up the toppings. Superfoods like shredded coconut and hemp seeds each bring unique flavors—not to mention, plenty more health benefits.

Plain old peanut brittle gets a big update in this recipe. Pumpkin seeds and pine nuts star in this version, which is complemented by aromatic cardamom. Instead of serving it plain, dip the brittle in melted dark chocolate and sprinkle with sea salt. The stunning fall candy looks like something you’d find in a fancy confectionary store.

Vegan chefs have discovered a plant-based substance that whips up just like egg whites—and it’s something you’re probably throwing away. Open a can of chickpeas, and you’ll see a starchy, opaque liquid. It’s called aquafaba, and it can be swapped into any recipe that calls for egg whites. Use it in vegan meringues, whiskey sours, or this silky chocolate mousse. 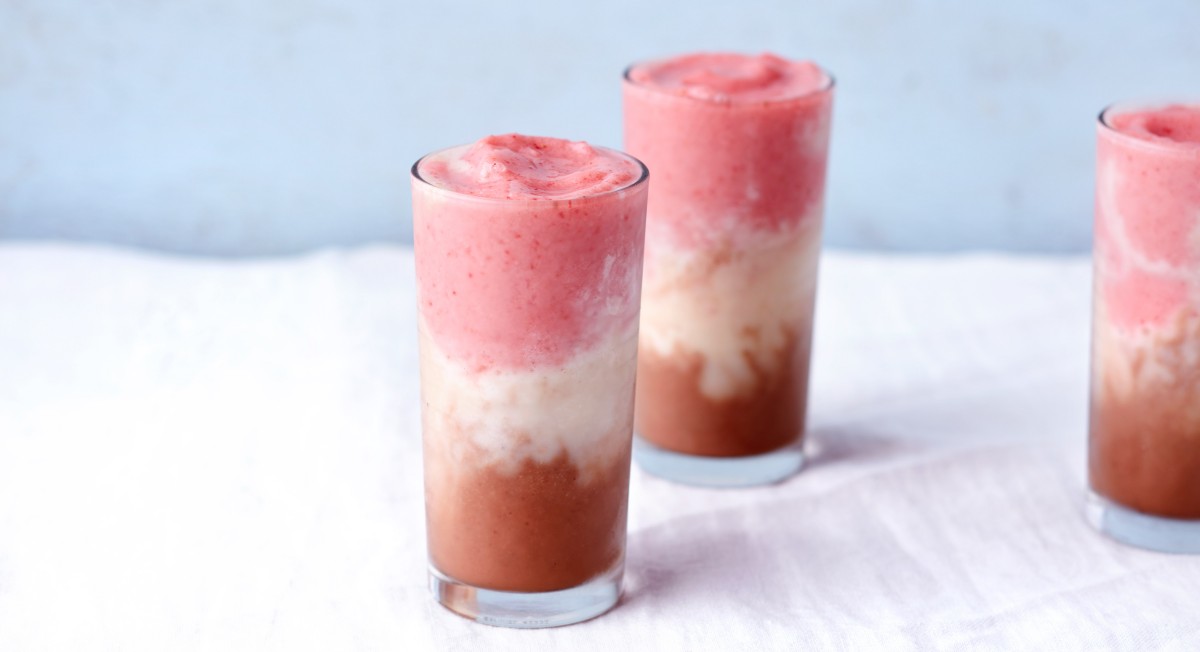 Sometimes, a sweet drink hits the spot better than any cookie ever could. Choose from these smoothies, nut milks, lattes, and even a few holiday drinks to satisfy sweet cravings.

This creamy, silky hot drink hits all the same notes as traditional eggnog. Nutmeg and vanilla still make an appearance, and lucuma, a superfood chock full of B vitamins, lends a sweet, maple flavor while chia seeds help thicken up the blended drink. Just remember to swap maple syrup in for honey.

Buttery cashews make the best non-dairy milk. When soaked and blended, they’re thick, creamy, and almost indulgent. Up the ante with warming spices, butterscotch-like maca powder, and a few dates for more sweetness. Enjoy it cold by the glass, or pour it into your coffee for an instant vegan latte.

The bright orange hue gives away the star ingredient in this smoothie. Smooth and creamy, it includes all the spices you’d expect in pumpkin pie, plus chia and hemp seeds for a dose of plant-based protein and omega-3s.

Like the favorite Italian ice cream, this smoothie has three layers: chocolate, vanilla, and strawberry. What it doesn’t have, though, is any dairy or refined sugar. Serve this tri-colored beauty in tall glasses to get the full effect.

This blended latte combines three green superfoods: matcha, moringa, and chlorella. Each offers plenty of antioxidants, and moringa and chlorella add plant-based protein to the mix. Who needs coffee when you have something even better?