Stroll into any health food store these days, and you’ll see coconut oil everywhere. But wait—how is it healthy when it’s more than 90 percent saturated fat, which scientists, nutritionists, and doctors have demonized for decades for purportedly clogging arteries and expanding waistlines?

Lucky for us, much of the research has essentially given people the green light to embrace the beneficial fat. Vegans and Paleo eaters approve. Since butter is generally forbidden in both diets, coconut oil’s high saturated fat content makes it a good substitute. Plus, it’s one of the only non-hydrogenated vegetable fats that stays solid at room temperature.

Recently, scientists have carried out many more studies on the health benefits of coconut oil specifically.

It’s true that coconut oil and saturated fats in general raise your cholesterol levels, but the key difference lies in which of the two types we’re talking about. There’s LDL, also known as “bad” cholesterol that forms plaque on the artery walls, and HDL, the “good” kind, which removes LDL from your bloodstream. The key to cardiovascular health is having the right balance—higher HDL and lower LDL.

Coconut oil can raise HDL in your blood while simultaneously lowering LDL. A Spanish study published in Nutricion Hospitalaria concluded that a diet rich in coconut oil significantly increased blood HDL concentrations, while keeping LDL concentrations even. They also noted that those results were in line with several other studies conducted on animals.

Another study published in the journal Lipids found that LDL decreased and HDL rose when subjects consumed coconut oil.

The research suggests that more coconut oil in your diet can improve your cholesterol profile.

High blood pressure and hypertension place too much force on the arteries, causing damage that leads to a more rapid accumulation of plaque. The heart must pump harder to ensure adequate blood flow through the arteries.

Enter coconut oil, which may be able to reduce both conditions.

Angiotensin I is a hormone that, when converted to angiotensin II by the enzyme known as ACE, causes vasoconstriction, or a narrowing of the artery walls. This increases blood pressure because the same quantity of blood must then move through a smaller space—imagine a freeway backup in which cars have to merge into a single lane because of an accident.

To combat hypertension, doctors often prescribe a class of effective pharmaceuticals known as ACE inhibitors—and turns out our favorite tropical oil has been shown to also inhibit ACE activity. A study published in Pharmaceutical Biology showed that hypertension-induced rats showed increased ACE activity, but when treated with a diet of coconut oil, it subsided.

Stress can also cause high blood pressure and hypertension, among other physical and psychological problems. Common markers of stress include elevated levels of corticosterone and serotonin in the blood, both hormones, which can lead to insulin resistance, higher glucose levels, higher cholesterol levels, and depression-related symptoms. Coconut oil has been shown to decrease these hormones in stress-induced mice.

The internet is awash in advertisements for miracle weight-loss pills. The idea is certainly appealing: no work, no sacrifice—just pop a pill and the pounds melt off.

Okay, maybe coconut oil isn’t quite there, but it may just be the next best thing, according to two studies. A Brazilian study gave two groups of abdominally obese women supplements of either coconut oil or soybean oil for two weeks. At the end of the trial, the women who’d taken coconut oil showed a reduction in waist circumference, while those who took soybean oil did not.

In a more comprehensive Spanish study, participants on a diet that included coconut oil lost more weight and shed more abdominal and neck fat than those in the control group. The researchers attributed the loss to medium-chain triglycerides, which are not incorporated into adipose tissue (the fatty layer under our skin) as readily as some other types of fatty acids.

There’s also evidence that coconut oil works on a biomolecular level to prevent the formation of new fats in the body in three different ways. A recent study in the British Journal of Nutrition found that coconut oil significantly decreased the activities of two enzymes involved in synthesizing fatty acids in the human body, Acetyl-CoA carboxylase (ACC) and fatty acid synthase (FAS). In addition to decreasing enzyme activity, coconut oil also seems to block activity at the DNA level to prevent the body from producing more FAS, which turns into stored saturated fats. The researchers also found that coconut oil increases the expression of enzymes that metabolize fatty acids.

Use Coconut oil for healthier teeth

Nobody likes going to the dentist. The cheesy music in the waiting room, the antiseptic smell, the shrill whine of the drill, and the embarrassment of being caught in a lie about your flossing habits—to say it’s unpleasant would be an understatement.

Coconut oil may not get you out of yearly check-ups, but it can help you impress your dentist.

Oil pulling is an ancient oral cleansing method that originated in India. Essentially, it’s nothing more than swishing oil in your mouth for several minutes (note: it’s important to spit it into the trash, as it can clog drains!). Despite the fact that the practice was created before germ theory, there’s mounting evidence that it actually works.

The researchers proposed two mechanisms that may be responsible for this remarkable finding. First, they postulated that swishing the oil caused it to emulsify and form a film that bonded with the teeth. This film could have formed a physical barrier against bacteria and plaque formation. The researchers also hinted at, but did not test for, coconut oil’s antimicrobial properties.

Interested in trying oil pulling? Check out the video below to see how to do it.

Coconut oil as an antimicrobial

Studies have shown that coconut oil can be effective at fighting the following infectious microbes:

Furthermore, almost half of the saturated fat in coconut oil is composed of lauric acid, a medium-chain triglyceride known to have general antimicrobial properties. 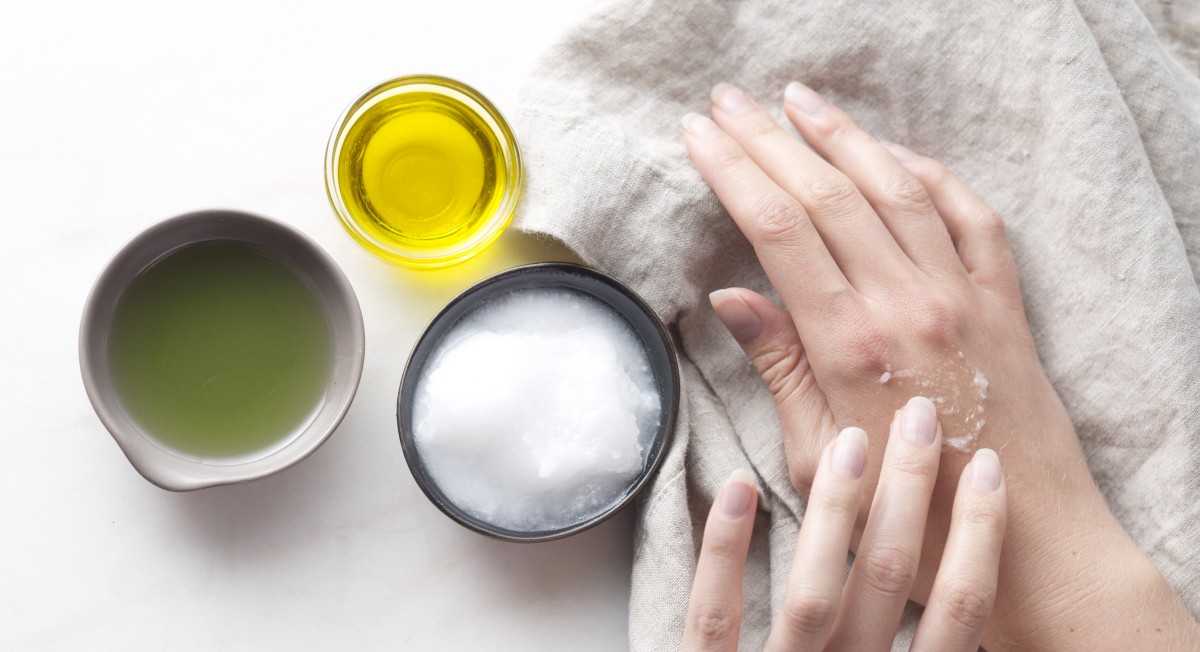 Coconut oil as a topical ointment

Many beauty products include some type of oil, which makes sense since oils are hydrophobic—meaning putting a layer of it on skin helps prevent dryness and moisture loss. Coconut oil is a favorite among natural beauty enthusiasts for just this reason.

Not only is coconut oil an effective skin moisturizer, it’s great at treating atopic dermatitis, more commonly known as eczema, and preventing and treating skin infections. In one study, several patients with eczema infected with staphylococcus aureus were treated topically with coconut and olive oils. Ninety-five percent of patients who used coconut oil no longer had a staph infection at the end of the study, compared to only half of the patients using olive oil.

Plus, it has also been shown to help the body heal more quickly. A study found that rats treated with coconut oil following a surgical excision to the skin exhibited much quicker wound healing than those who weren’t. The scientists found that the oil caused increases in fibroblast levels, collagen levels, and antioxidant enzyme activity, all of which contributed to faster healing.

If you aren’t yet convinced of the health benefits of coconut oil, there’s still one last reason that you should give it a try: it just tastes really, really good. (Well, assuming you like coconut.) Virgin coconut oil (unrefined and extracted without heat), has a rich and deeply nutty taste with a hint of sweetness.

It’s perfect for Southeast Asian dishes. You can also use it as a replacement for butter in tropical desserts—think key lime pie with a coconut oil graham cracker crust. If you don’t mind the flavor, you can pretty much it in place of any other oil in any application—frying, roasting, baking—you name it.

If you’re not so into the flavor, you can buy refined coconut oil, which is extracted from dried coconut, also known as copra. It still has the same saturated fat profile as its virgin counterpart, sans the distinctive “coconutty” taste.

Right about now you might be thanking nature for bringing us this truly healthy ingredient. And thanks to science, we know the truth behind coconut oil’s superpowers.

As an ingredient in DIY beauty and personal care products, the possibilities are endless! A couple of our favorites: this whipped body butter and these coconut cold remedies.