What Is A GMO?

It’s the buzzword that won’t go away: GMOs. And, lately, the conversation about genetically modified organisms only continues to heat up with passionate opinions on both sides.

One recent example is the sugar industry, which has been embroiled in the chat as the two largest sources of the sweetener (sugar beets and cane sugar) are being traded as different commodities for the first time in history. Unlike the majority of sugar beets, cane sugar is not modified, and that discrepancy has created a cane sugar shortage and higher prices as more candy manufacturers have adopted non-GMO practices.

Although more headline news is being devoted to the topic, regulation is not—and consumers are often left in the dark to wonder what GMOs really are and whether they should eliminate GMOs from their diets. Knowledge is power, and consumers that understand the full scope of GMOs are better equipped to make decisions.

Why GMOs were developed

A GMO is a living plant or animal species whose genetic material has been altered in a laboratory setting for purposes of preserving, protecting, multiplying, or producing a cross species of food that wouldn’t grow naturally.

This alteration, known as genetic engineering (GE for short), originally rose to popularity when farmers realized they could grow crops to withstand herbicides and insecticides. While naturally-occurring plants are killed by these chemicals, genetically modified varieties can outlive them, which makes it easier for farmers to rid their fields of pests without having to pay special attention to spraying around their crops.

As such, GE practices have been infiltrating our food supply since the ‘90s (the longer-lasting Flavr Savr tomato was among the first GMO products to hit grocery stores in 1994). In recent years, however, there has been some concern that GE practices may lead to unstable genetic combinations that don’t naturally occur in food, opening up the risk that they may not be safe for human consumption. 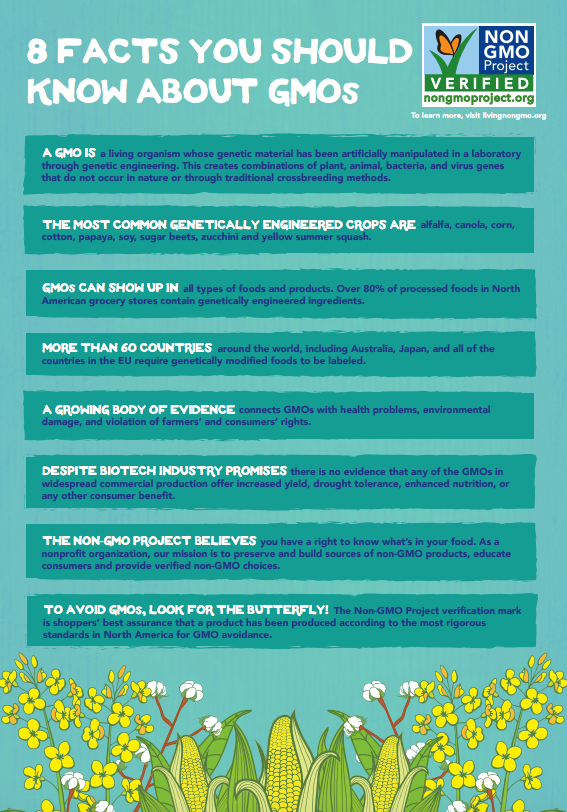 The safety of GMOs

While GMOs sound beneficial in theory—especially for creating a more economical food supply that can reduce the high costs of feeding families—a growing body of evidence suggests that GMOs may present a risk to human health. Some potential concerns include increased toxicity as a food’s genetic makeup is altered, and malnutrition, as changing a food’s natural makeup may affect the amount of nutrients delivered when we eat them.

Because of these health risks, nearly 60 countries have banned or placed significant restrictions on the sale and cultivation of GMO crops. But in the United States, there are currently no regulations on GMOs, and GMO foods are not required to be labeled, even though polls consistently reveal that many Americans would like to see this happen.

Large agrochemical corporations have taken out thousands of patents on the genes present in genetically engineered substances, and farmers are now required to purchase GMO seeds directly from distributors and are unable to save them year after year. Additionally, since GMO seeds often have an effect on the soil in which they are planted, farmers who want to step off of the GMO wheel are often unable to do so since natural seeds will struggle to grow in the same fields.

Farmers can also be subject to legal repercussion if gene-infested spores drift into their non-GMO fields during high winds, or if they don’t pay the proper fees to work with these types of seeds. In Kenya, for example, an “Anti-Counterfeit Act” was recently instituted, which states that the genes contained within GMO seeds are technically intellectual property and farmers that purchase them must pay royalties on their crop production.

As these patents continue to become more prevalent, small farmers face rising costs, the need to purchase more specific seeds, and must maintain relationships with large agrochemical companies. This places a substantial financial burden on many small producers across the world, particularly in developing countries. 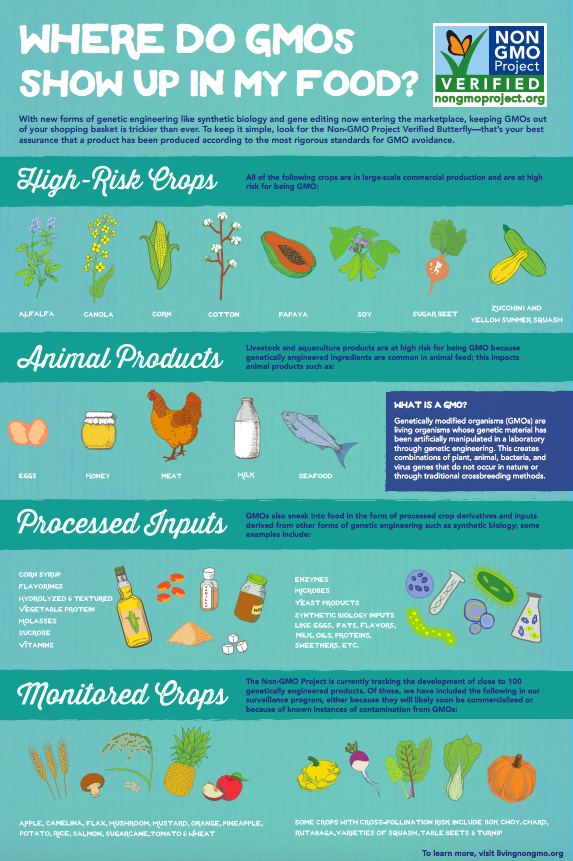 How to avoid GMOs

Until GMOs are consistently labeled, it will be tough to avoid them entirely. However, there are some tips you can follow if you’d like to steer clear.

Illustration by: Karley Koenig and Katherine Prendergast. Infographics by: The Non-GMO Project.