Ed. note: At Thrive Market, we are making progress on our Better Chicken Commitment. As of October 1, 2021, 100% of our chicken is Global Animal Partnership certified to either Level 3 or Level 4 and 75 % of our chickens are processed using multi-stage CAS.

As a Product Innovator for Thrive Market Meat and Seafood, Mike Hacaga has visited a lot of poultry farms, but within minutes of arriving at the home of Cooks Venture—an 800-acre farm in Arkansas—he could tell this one was different. For starters, the chicken pasture was outfitted with a number of structures called “enrichments”—perches and shelters designed for the chickens to exercise their natural, habitual instincts. The innovative poultry barn doors (roughly 6 feet in width and spaced about 10 to 12 inches apart) span nearly the entire length of the building. Every morning, those same doors—which also double as ramps—open up and remain that way all day. This practice alone is pretty rare, but Hacaga was most surprised by what happened next: chickens began streaming out of the barn and venturing deep into the open pasture.

“Chickens are typically very nervous birds, so they don’t usually travel too far from the coop. They also get tired very quickly because of the way they’re bred—their legs don’t mature quickly enough to support the weight of their bodies. So, to see these strong birds streaming out of the coop and then running and jumping around on the pasture—it was truly incredible,” Hacaga said. 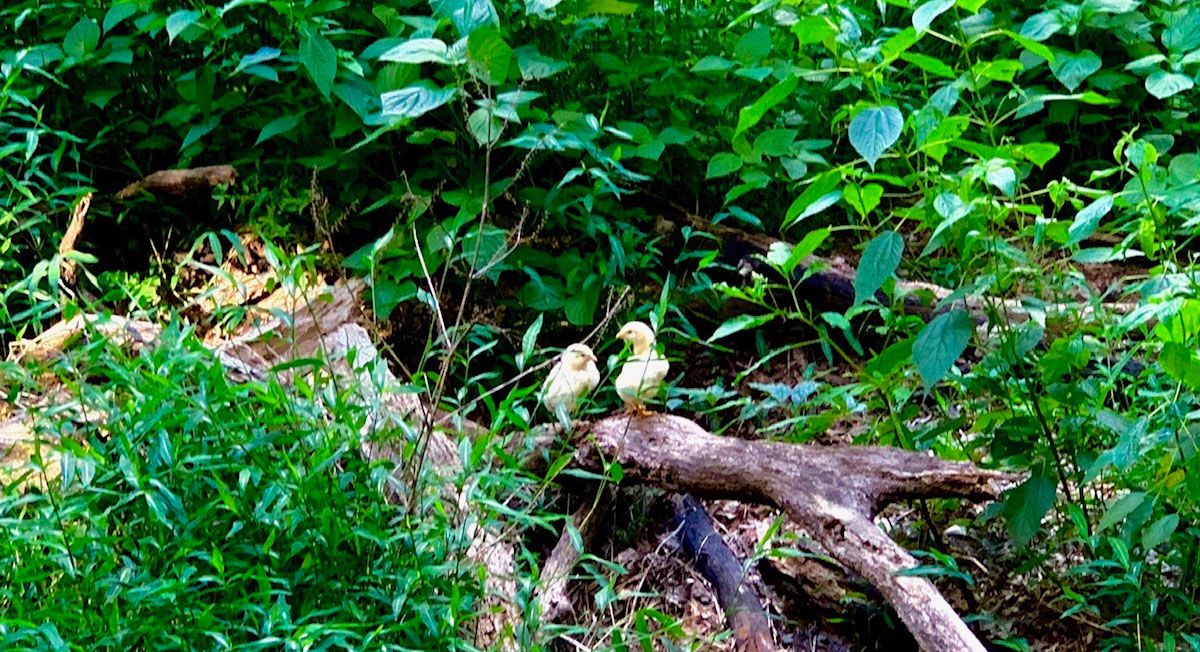 One reason for the difference? These birds are heritage, heirloom chickens. They look how chickens looked before the mass industrialization of the meat industry, which resulted in a shift that emphasized speed in getting animals to market as quickly as possible and used breeding techniques to exaggerate the size of the most popular cuts. In the process, the quality of the meat and the animals’ welfare were both severely compromised.

Since the 1950’s, the most popular conventional broiler chicken has been a type of Cornish cross-breed, originally developed by the University of Edinburgh. The strain was bred to mature quickly and produce a lot of breast meat—the most popular cut. The cross-breed increased supply during a time when more people were incorporating meat into their diets, but the top-heavy chickens developed faster than their legs could support, making it difficult for the birds to walk. That meant that even when outdoor access was available, the chickens were unable to take full advantage of it. Their health was also compromised, necessitating widespread antibiotic use to prevent sickness in close-kept flocks. Despite these major drawbacks, efficient production reigned supreme, and now, the most popular chickens in the U.S. are genetic anomalies with badly compromised health and a drastically eroded quality of life.

The Cooks Venture chicken is a three-way cross between birds recognized by the American Poultry Association as American Heritage chickens: the Naked Neck Buff, the Delaware, and a family heritage bird bred by Blake Evans, Cooks Venture’s Executive Vice President and a third-generation poultry farmer. The breed is classified as a slow-growth bird, which means that they look smaller when they’re young but fill out as they age. And, typical of a chicken that’s truly been raised on a pasture, they have a different body composition: longer legs and a more tapered breast. Overall, the birds look much healthier and are naturally more physically active. 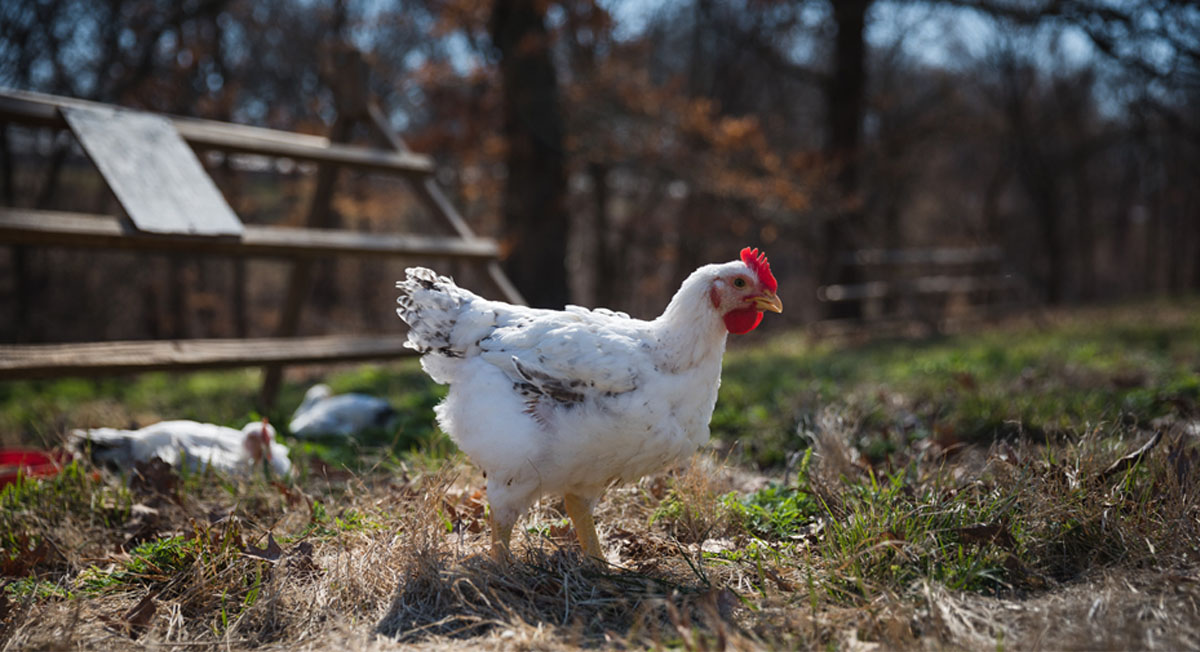 “We’re the only independent breeder of any scale in the country, allowing us to select for better quality meat and exceptional flavor,” said Matt Wadiak, founder and CEO of Cooks Venture.

Wadiak—a food entrepreneur—got the idea to improve the efficiency of America’s food supply chain while working with Bill Niman and sourcing ingredients for his previous business. He saw firsthand the inefficiency of the U.S.’s farming system: government subsidies to grow corn and soy encouraged heavy farming of those products, minimizing best practices like crop rotation, and resulting in a surplus that had to be fed to animals that don’t typically eat those grains. The result? Sickly farm animals, subpar meat, and dried out, anemic soil—largely stripped of valuable nutrients—that produces bland, nutritionally deficient crops and produce. It’s a backwards system that’s depleting the health of our soil.

Wadiak knew there had to be a better way. He started by looking at the corn industry. The first use of the U.S.’s corn surplus is to create ethanol, an alternative fuel. The second was to use it in cattle feed, but changes were already underway as more consumers and farmers realized the benefits of raising and consuming grass-fed beef. That brought Matt to the third-largest usage of the country’s corn surplus: the poultry industry. It was there that he saw a real opportunity.

Broiler chickens have been bred to digest corn, but Cooks Venture chickens have a more advanced digestive system that allows them to eat a broader range of feed. So, Cooks Venture has been partnering with farmers and helping them transition their crops to regeneratively grown feed for the chickens.

“The chicken is the medium for helping to improve soil quality over time,” Wadiak said. “Without a breed of chickens that can eat a more diverse diet, there wouldn’t be much demand for regeneratively grown crops.”

In addition to proving that the meat industry doesn’t have to deplete our natural resources, Cooks Venture also leads by example by creating better living conditions for animals. Certified to Global Animal Partnership’s Pasture Raised (Step 4) animal welfare standards, Cooks Venture chickens are given unrestricted access to the outdoors and a clean, spacious barn. Their environment encourages them to display natural behaviors like pecking and flapping, which, in addition to pedigree, allows the birds to have better health than conventional livestock. They grow to be stronger than other modern breeds and are never given antibiotics. During processing, the chickens are air chilled, which minimizes excess water in the meat, resulting in better texture and flavor.

“I think people will be attracted to the program for all of its amazing attributes, but they’ll continue buying these chickens because they taste so good,” Wadiak said.

Even from the package, Cooks Venture poultry looks a little different than conventional chicken. The skin, which appears translucent, is thicker than a broiler chicken and crisps up perfectly. The meat composition is also different. Broiler chickens have more large strain muscles, which retain more water and can result in a rubbery texture when cooked. In contrast, Cooks Venture chickens have smaller muscle fibers and retain less water.

“These birds can be prepared as you would prepare a regular chicken. However, the difference in flavor is astounding—juicier meat, crispier skin, more flavorful and tender.”