How to Cook Spaghetti Squash

Though the dish hails from Italy, spaghetti and meatballs has become an American pastime over the years with everyone trying to get in on creating the next crazy iteration.

While Olive Garden has come up with “spaghetti pie” and one restaurant in Los Angeles is even selling a “spaghetti and meatball-wich,” one of the easiest (and most healthful) creative twists is making spaghetti squash.

When cooked, this nutritious gourd produces long strings with tender, noodle-like consistency, and because it’s low in starch, it’s the perfect option for those on low-carb, gluten-free, or Paleo diets. Though, despite its many positive attributes, most home chefs wonder about how to cook this delicious vegetable. Here are three ways to prepare spaghetti squash, and some ideas for how to best serve it so everyone at the table will enjoy it.

Spaghetti squash got its name not so much because it tastes like spaghetti, but because it looks like spaghetti. Once this yellow squash is fully cooked, the flesh forks out into long stringy strands that look a lot like pasta, though they taste more like the vegetable.

However, unlike acorn or butternut squash, spaghetti squash has a mild and somewhat bland taste profile that pairs well with most flavors and can be a great stand-in for other dishes like pasta salad and even casseroles. It’s also an Ideal way for getting picky kids to fill up on nutrient-rich veggies without even knowing it.

Spaghetti squash is a super healthful option with a number of positive benefits over traditional noodles and similar vegetables. It’s low-calorie (you’ll get 30 calories in one cup compared to about 56 in each cup of acorn squash and 220 in each cup of traditional pasta). It’s also low-carb with 10 grams per cup and nutrient-rich with high concentrations of antioxidants and vitamins C and B-6 that can fight free radical damage and support the immune system.

Spaghetti squash also has a good portion of trace minerals and electrolytes, which can help maintain overall health and ward off issues like high blood pressure, dehydration, and muscle weakness.

Combined with the fact that spaghetti squash is a delicious, hearty, satisfying food, it’s become one of the most popular squashes for home cooks everywhere. Especially when you see how easy it is to prepare.

How to cook spaghetti squash

Left in its natural state, spaghetti squash is a tough and hard vegetable that’s virtually impossible to fork out of its own skin. When warmed up, however, the beautiful yellow flesh softens and becomes tender and juicy, yielding willingly to utensils. There are three ways you can get it to work with you.

One of the easiest ways to cook spaghetti squash is in the oven. In addition to being quick and simple, with no boiling required, you can cook it up to 24 hours in advance of using it for a dish. That makes it an ideal option for making dinner prep less time-consuming. Simply follow these steps:

1. Cut the squash in half
Before beginning, know that spaghetti squash comes with a built-in armor, and it can take quite a bit of effort to hack it open. To make it a bit easier (and keep your fingers intact), use a sharp knife to score a line around the spaghetti squash where you intend to cut it in half.

Then, pop the whole squash into the microwave for about five minutes. When the time is up, allow the squash to cool slightly, and then use a sharp knife to cut along the pre-scored line. The heat of the microwave will soften the squash just enough that the blade glides through effortlessly. 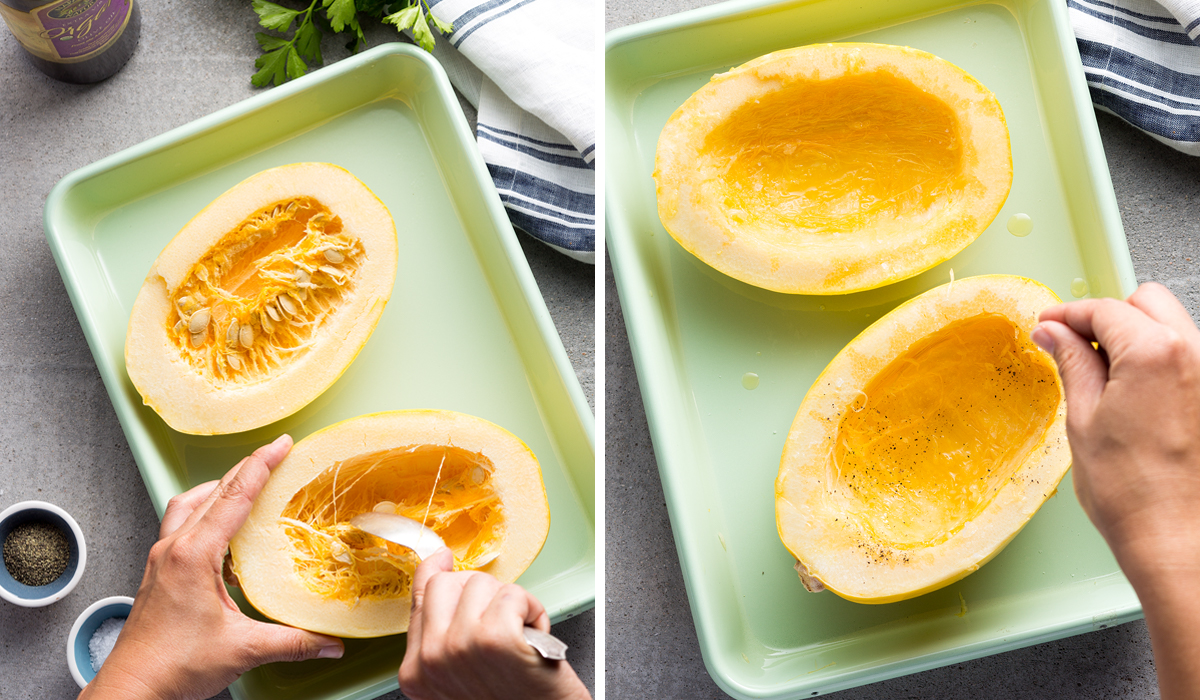 2. Scoop out the seeds
Once the squash is cut in half, use a spoon to scoop out all of the seeds. You can either discard them or set them aside and roast (just like pumpkin seeds) for a healthful and flavorful snack. Just be sure to remove only the seeds, and not the surrounding yellow flesh, at this time.

3. Arrange the squash
Once the squash is cleaned of seeds, coat the bottom of a 9” x 13” glass dish with a small amount of olive oil. (Or, you can opt to steam the squash by pouring a half-cup of water into the bottom of the dish instead.) Whichever way you choose, you’ll then want to place the squash halves into the dish face-down and roast for 30-35 minutes at an oven temperature of 375 degrees Fahrenheit. 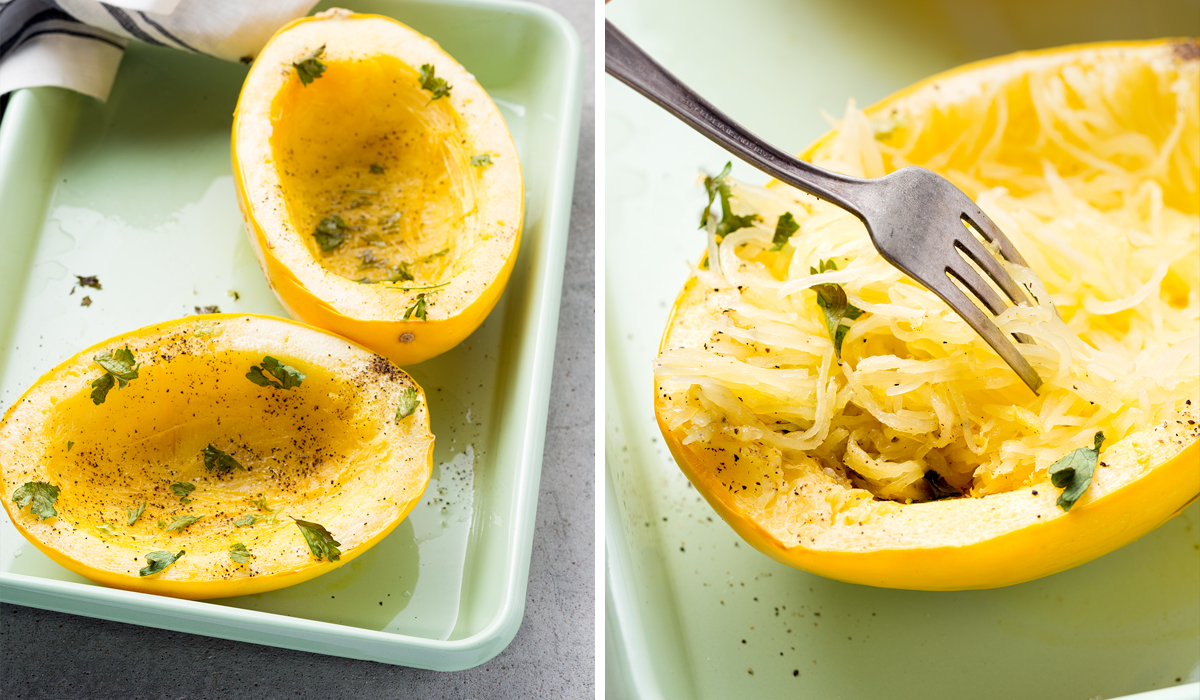 4. Strip the flesh
After a half hour, take the squash out of the oven and move it to a cutting board to allow it to cool. Once cool, use a fork to rake the flesh of the spaghetti squash into a bowl—scrape in the same direction as the grain of the flesh to get the most out of it.

5. Serve it!
If you’re roasting your spaghetti squash before you plan to serve it, keep in mind that it will keep well in the refrigerator for a week. You can also package and freeze the prepared spaghetti squash for up to a month. If you want an even softer texture, place the spaghetti squash strings into an oven-safe dish and put back into the oven for another 20 minutes. Or, to help the “noodles” pick up a nice crunch, broil them lightly before serving or preparing.

If you’d prefer to avoid the judo moves (and extra time) that’s needed to slice the spaghetti squash in half, you can also just roast it whole. Using a fork, poke holes into the skin. Then, place the squash in a large cast iron or oven-safe skillet and bake at 400 degrees Fahrenheit for approximately 60 minutes, or until the middle of the squash is tender and the skin is easy to cut. Follow steps two, four, and five above.

Some spaghetti squash aficionados even say that roasting the squash whole produces a nuttier, richer flavor, so it’s something you may choose to try as you branch out with more cooking experiments.

Cooking spaghetti squash in the microwave

If you can’t afford to wait an hour and you want spaghetti squash now, consider cooking it in the microwave. For this approach, first place the whole gourd into the microwave for five minutes to soften it. Then halve the squash and heat up for about 12 minutes. Once the time is up, cut in half, core out the seeds, and serve.

While cooking spaghetti squash in the microwave is the fastest option, you may also find that it retains too much water. If so, drain on paper towels before being using in your recipe.

How to use cooked spaghetti squash

Because spaghetti squash has such a mild, amiable flavor, it’s good for just about everything. While few people serve the squash’s flesh solely on its own, it goes beautifully with a variety of pasta dishes and casseroles, or as a side dish.

Regardless of how you decide to use spaghetti squash, first begin by tossing the “noodles” with some butter or olive oil. Just like regular pasta, this prevents the squash strings from sticking together. Then, sprinkle with salt for a bit of extra flavor.

From there, the ideas for using spaghetti squash are virtually endless:

Making a case for spaghetti squash

Regardless of what you ultimately choose to do with spaghetti squash, this healthy, low-carb, low-calorie, vitamin-rich vegetable is sure to quickly become one of the most preferred ingredients in your kitchen. Whether you want to get fussy kids to eat more healthful options or simply limit the amount of processed foods, spaghetti squash is a versatile, delicious, nutrient-packed option that offers near-endless uses.