Graham crackers, chocolate, and marshmallows toasty from the fire—classic s’mores are hard to beat. When you’re making them in the kitchen instead of over a campfire, take it as an opportunity to get fancy. This version brings together caramelized banana slices and homemade marshmallow fluff, sandwiched between graham crackers dipped in dark chocolate and sprinkled with flaky sea salt. At the very end, a quick hit from a kitchen torch gives the marshmallow that melty goodness and signature smokiness. 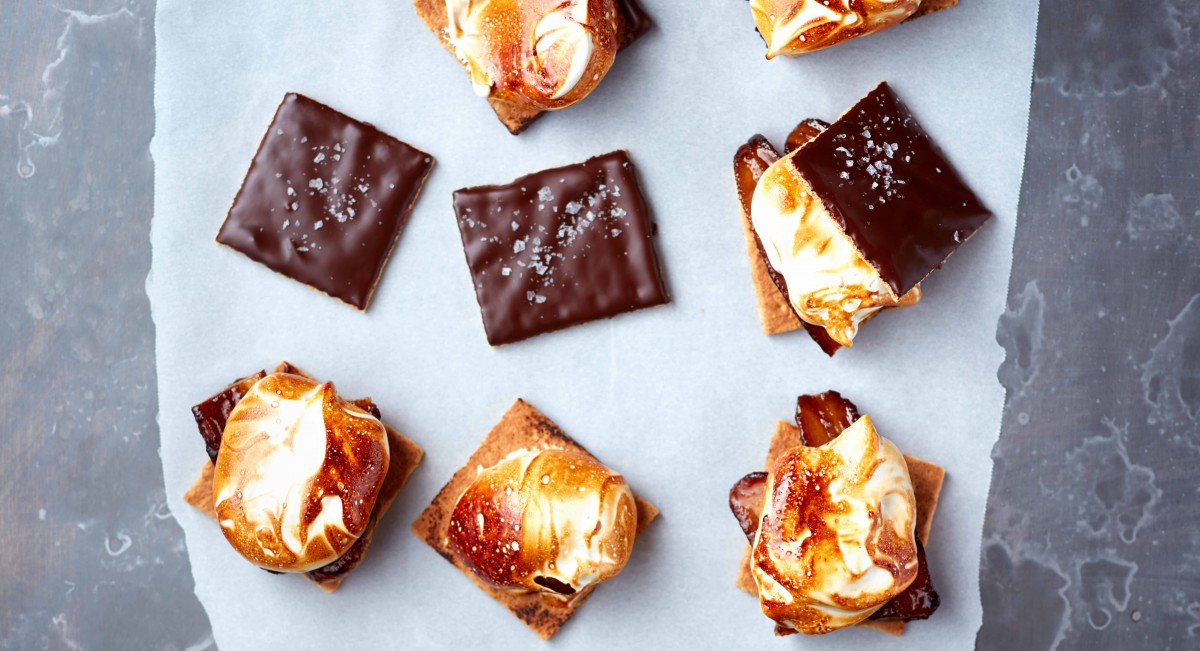 Make the chocolate-covered graham crackers
Melt chocolate in a heat-proof bowl set over a pot of simmering water. Dip cinnamon sugar side of graham cracker halves in chocolate, then set them chocolate side up on a parchment-lined baking sheet and place in fridge to set.

Make the marshmallows
Pour 1/2 cup water into the bowl of a stand mixer and sprinkle gelatin over top. Set aside.

Add honey and remaining 1/2 cup water to a medium saucepan over medium heat. Bring to a boil, then reduce heat and simmer until it reaches the soft ball stage or a candy thermometer reads 240 degrees.

Fit the mixer with the whisk attachment, then turn it on low and beat gelatin mixture. With mixer running, carefully pour in honey syrup in a slow, continuous stream. Add vanilla extract, turn mixer to high, and beat for 10 minutes, until white, glossy peaks form and mixing bowl feels cool to the touch. Keep mixer running on low to keep mixture from setting.

Caramelize the bananas
Heat coconut oil in a large skillet over medium heat and stir in coconut sugar. Turn heat down to medium-low and let sugar dissolve and start to bubble. Stir in water, 1 tablespoon at a time, until mixture reaches a smooth consistency. Let cook 30 seconds to 1 minute, then add bananas. Spoon caramel over and let cook 1 to 2 minutes, then flip and cook 1 minute more.

Assemble the s’mores
Sprinkle tops of chocolate-covered graham crackers with large-flake sea salt. Place 2 pieces of caramelized banana on top of 1 cracker and scoop a large dollop of marshmallow mixture on top. Use a kitchen torch to caramelize the tops and sides of the marshmallow until golden brown. Top with another graham cracker to serve, and repeat with remaining s’mores.