What is the Paleo Diet?

At first glance, the Paleo diet looks a lot like an outrageous fad. It’s spiked dramatically in popularity within the past couple of years, counts Miley Cyrus and Kobe Bryant among its celebrity followers, and has a hashtag with over 6 million posts on Instagram to boot.

But there’s a reason that “going Paleo” isn’t going anywhere—it’s not really a diet that helps you lose weight fast, but instead an overall lifestyle change that can yield positive and lasting results.

What is the Paleo diet?

Sometimes called the Neolithic diet, eating “primal,” or the caveman diet, it’s based on eating the same things that were available to our hunter-gatherer ancestors from thousands of years ago. The menu back then contained lots of meat, fish, berries, tubers, and vegetables—and none of the packaged and processed foods that most modern-day eaters rely on for the majority of their meals nowadays.

Why eat like a caveman? Paleo proponents believe that a diet high in processed, genetically modified food causes modern health issues like obesity, diabetes, cancer, and autoimmune diseases. Their argument is that humans ate a certain way—the Paleo way—for hundreds of thousands of years, and our bodies have been conditioned to accommodate this way of eating.

But about 10,000 years ago, we started putting down roots and began farming, and this agricultural revolution pretty much turned our old way of eating on its head. Those who stick to a Paleo diet believe that our bodies haven’t evolved enough in the following years to be able to successfully digest foods like grains, dairy, and sugar. Eating these foods—which happen to be the pillars of the Standard American Diet—are thought to be the root cause of nearly every ailment that afflicts modern humans.

Sounds scary, right? And considering that 66 percent of Americans are considered overweight and 33 percent are technically obese, it certainly seems like there’s something wrong with the way we’re eating now. Fans have found that adopting this old-new diet helps improve their overall health, and many success stories credit the diet with reversing chronic health issues.

7 Rules of the Paleo Diet

Despite what you’ve heard, it’s actually not as strict as you might think! Paleo eaters love the diet, despite its detailed rules, because they can eat as much as they want instead of tediously counting calories or practicing portion control. According to Dr. Loren Cordain, the self-proclaimed founder of the Paleo movement, “[Adopting the] fundamental characteristics of hunter-gatherer diets will help to optimize your health, minimize your risk of chronic disease, and lose weight.” Cordain recommends the following seven dietary guidelines when trying to eat like our Paleolithic ancestors. 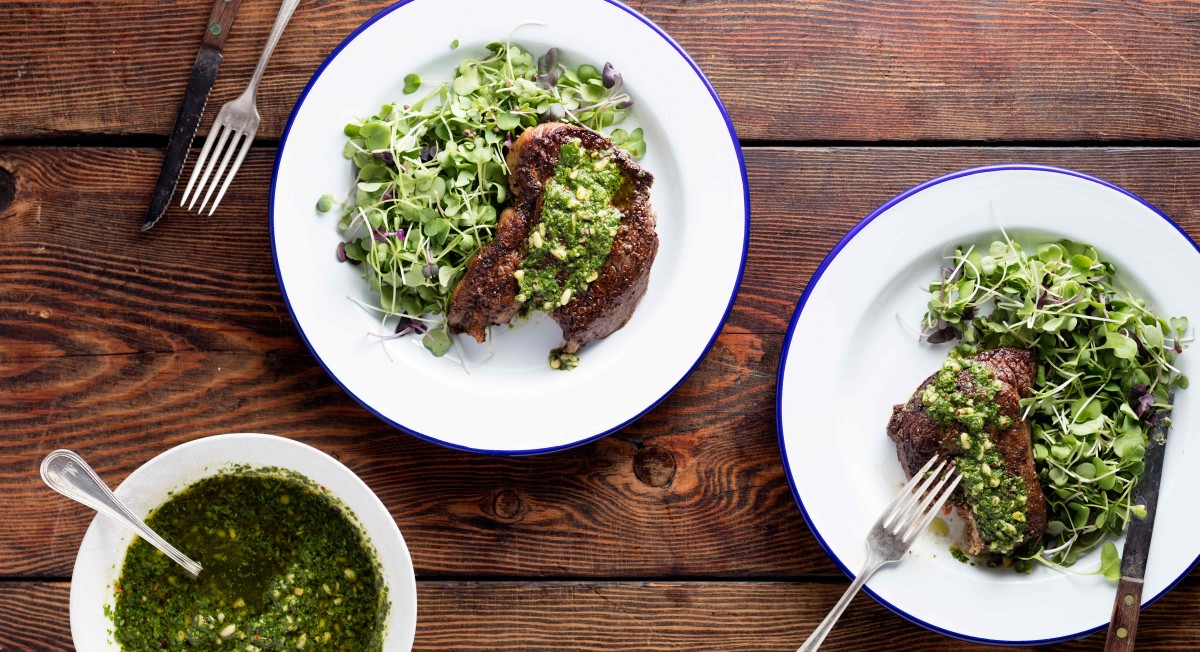 Hunter-gatherer diets relied on animal protein for 19 to 35 percent of their calories, says Cordain, which is more than what most of us are eating on a daily basis. However, it’s not all you’re going to eat—Paleo gets a bad rap because some people think that it’s all meat, all the time. Clearly, that’s not the recommendation.

The more veggies, the better! You’ll want to pick mostly green things with a low glycemic index, meaning vegetables with less sugar and carbohydrates. Remember that vegetables are relatively low in calories and high in fiber, so you can basically eat as much as you’d like on the Paleo diet.

If you eat more fruits and vegetables, this will happen naturally. “Dietary fiber is essential for good health, and despite what we’re told, whole grains aren’t the place to find it. Non-starchy vegetables contain eight times more fiber than whole grains and 31 times more than refined grains,” Cordain writes. Adding more fiber to your diet will help regulate blood sugar and control weight and fat gain. A high fiber intake has been also proven to reduce risk of developing heart disease by 40 percent.

On the Paleo diet, fat is your friend—in particular, omega-3 fatty acids and monounsaturated fats. According to Cordain, “It is not the total amount of fat in your diet that raises your blood cholesterol levels and increases your risk for heart disease, cancer, and type 2 diabetes, but rather the type of fat.” Everyday staples that are also sources of healthy fat include avocados, fatty fish, grass-fed animal sources, and some nuts.

According to Cordain, the average American now consumes about twice as much sodium as potassium. And much of that excess can be traced back to highly processed packaged foods that rely on extra sodium in order to stay shelf-stable and add flavor. It’s pretty obvious that our Stone Age ancestors didn’t stop at 7-Eleven to pick up a slurpee and a bag of chips while they were hunting down their next meal—so follow in their footsteps, and eat as cleanly as possible.

This rule is a little controversial amongst the Paleo community, but Cordain maintains that it’s one of the tenets of the diet. Meats, fish, grains, legumes, cheese, and salt are all considered acid producers, and fruits and vegetables are alkaline producers. Cordain believes it’s best to limit your intake of the former as much as possible, because “a lifetime of excessive dietary acid may promote bone and muscle loss, high blood pressure, and increased risk for kidney stones, and may aggravate asthma and exercise-induced asthma.” Many other Paleo experts back up Cordain, in that they view these “acid producers” as inflammatory—and believe excess inflammation in the body is the root cause of disease. No matter what, eating more fruits and veggies is never a bad thing.

Up your vitamin and mineral intake

Grass-fed meats, fruits, and veggies naturally contain potent levels of vitamin C, vitamin A, and vitamin B12. Instead of eating processed foods fortified with added nutrients, Cordain recommends getting all your nutrition from whole food sources, which he believes are better absorbed by the body.

What can you eat on the Paleo diet?

At first glance it might seem limiting, but the Paleo diet is actually very inclusive. Because you’re not counting calories, you can essentially eat as much Paleo-friendly food as you’d like. Whole head of broccoli for dinner? Sure, why not! As long as you stick to the list of approved foods—check out our Ultimate Paleo Food List if you have questions—you’re good to go.

About 19 to 35 percent of your meals will come from a protein source, but it’s important to make sure that you’re eating grass-fed—not grain-fed—meat. Grains aren’t allowed on the diet because they contain antinutrients that Paleo advocates believe to be toxic to the body. Antinutrients are just what they sound like: compounds that inhibit your body from absorbing nutrients. They exist to protect plants biochemically from predators (like a suit of armor)—and they can cause anything from gastrointestinal distress to joint pain when ingested on a regular basis. Avoiding grains in every form is an important part of eating like a caveman, and you can read Primal expert Mark Sisson’s excellent blog for more information about why to avoid grains.

Eating the stuff that comes straight from the ground should make up the bulk of your calories and nutrients, just like our Paleolithic ancestors. Sure, they probably had a slightly different range of produce available back then, but eating locally grown and seasonal fruits and vegetables is the easiest way to emulate the caveman diet. Eat as many non-starchy and low-glycemic index produce items as you’d like.

Yup, our ancestors were all about eating fat. Think about it—fat is the highest calorie macronutrient. It weighs in at about 9 calories per gram, in comparison to the 4 calories per gram in carbs and protein, which means it was the most efficient fuel for Paleolithic people who spent hours every day hunting down their dinner. Eating fat isn’t going to make you fat, especially when you’re getting those calories from good sources.

Animal fats, nuts, coconut, avocado, and olive oils are all Paleo-approved healthy fat sources. Limit your vegetable oil intake as much as possible, as it can be inflammatory and contains polyunsaturated fats, or PUFAs, which contribute to increased levels of LDL (or bad) cholesterol. 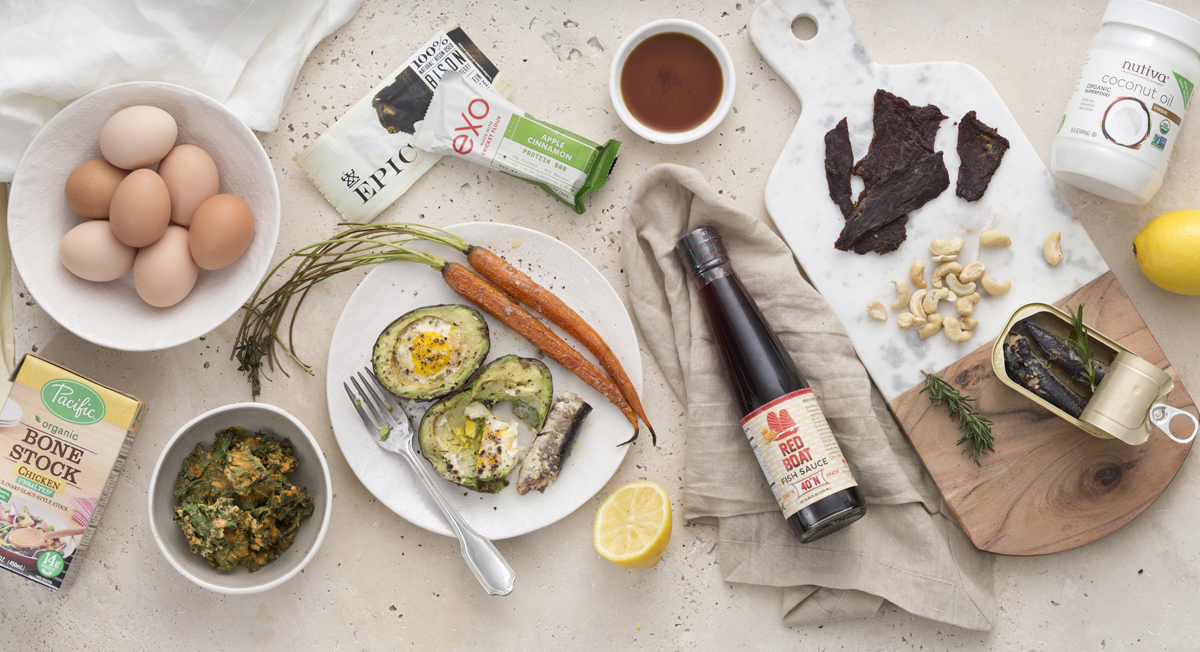 Not quite ready to give up the bread basket? The benefits of adopting the Paleo might change your mind. Many claim that eating like a caveman can help you:

Criticism of the Paleo diet

Of course, for all the people who credit the Paleo diet with transforming their lives for the better, there are just as many naysayers. Critics claim the Paleo diet grossly simplifies what our ancient ancestors actually ate. They point out that early humans relied more on what was available based on their surroundings—people in desert climates would have little access to fish and large game, and those living by the water would probably depend on fishing more than hunting for their protein.

Geneticists point out that contrary to what the Paleo community says—that our bodies haven’t adapted to modern diets—many subsets of the population actually have adapted over the past 10,000 years to foods that aren’t allowed on the diet, like milk and wheat.

So, should you go Paleo?

All in all, the diet itself is pretty balanced: A typical meal is made up of protein, vegetables, fruits, and healthy fats. You may lose weight on the diet just because you’ll be cutting out junk foods like sugar, sweets, breads, cheese, ice cream, chips, and crackers, all of which can wreak havoc on your waistline.

Always consult a doctor before you begin a new diet, but it couldn’t hurt to try eating Paleo for a few weeks. You might just love the results!