The human body is made up of more than 50 percent water, so keeping it hydrated is important to maintain optimal health—especially if concentrations are depleted through sweat or illness.

While drinking water in its purest form is still one of the best options, there are also nutritious beverages like coconut water that provide other refreshing ways to quench your thirst. Coconut water has been growing in popularity over the past few years thanks to its great taste and natural vitamins and minerals, including electrolytes, that provide a number of benefits.

What is coconut water?

You can find bottles on shelves in almost every store, but what exactly is coconut water?

Coconut water is the almost clear liquid that is found inside young, green coconuts that are picked around five to seven months of age. This is unlike the prototypical brown, hairy shells that are ripe and have more meat and less water to be harvested.

That’s not to be confused with coconut milk, which is another beverage that comes from these tropical drupes. This is a mixture of coconut water and the meat inside, which are pureed together to produce a thick liquid high in saturated fats that’s used in a number of cooking applications.

The great thing about coconut water is that it’s more than just a product that tastes great. It’s also a natural energy and sports drink that surpasses the capabilities of other commercial products. Some marketers have even called it “Mother Nature’s sports drink.” That’s because it’s sugar-free, with less sodium and calories, and has about four times the amount of potassium in a single banana, which is the essential mineral that bodies need to stay hydrated. Some say that coconut water can even hydrate better than regular water.

Professional tennis player John Isner credited coconut water for his endurance in an 11-hour marathon win at Wimbledon, saying, “It kept me going in long matches and prevented me from cramping even in the hottest and most humid conditions.”

How is that possible? Coconut water is absorbed by your body’s cells at a faster rate, which allows you to stay hydrated longer and rehydrate faster. In fact, it’s often been used as an alternative to IV solutions in emergency situations.

Keeping your body hydrated while exercising or participating in any demanding physical activity is important. If you’ve ever gotten a cramp while dancing, swimming, or running, chances are it’s because you were dehydrated. Muscle cramps can be caused by muscle strain—when your body does not have enough water, it taxes muscles, forcing them to work harder.

Coconut water is also a great hangover cure. The amount of electrolytes and quick rehydrating properties can quickly replenish what may have been lost after a night of drinking and can help eliminate those annoying headaches caused by dehydration.

Adding in coconut water’s nutritional values, such as stores of calcium, phosphorous, and magnesium, amino acids, and vitamins such as A, E, and B, it’s a natural choice to reach out for any time you are feeling thirsty.

However be sure to read the label as some manufacturers have started adding sugars to their products, which takes away from the wholesome effect.

While research is limited, there are some surprising findings regarding the health benefits of coconut water.

Coconuts have high amounts of vitamins A and E as well as polyphenols and phytosterols. When combined, they work together to decrease levels of LDL, or “bad” cholesterol, the type that stays in the blood and has been associated with risks for cardiovascular disease and other heart issues. The large amounts of magnesium also help regulate and lower blood pressure. Some studies have shown that the mineral may even go as far as to prevent a heart attack.

Coconut water is high in fiber (one cup has ten percent of the daily recommended value), which keeps you feeling fuller for longer and cuts down on the need to snack between meals. It has a good amount of carbohydrates per serving, too, mostly derived from the natural sugars in the nut. This means you’ll get a dose of pure fuel for your body every time you drink it. This in turn increases the body’s metabolic rate, making it easier to burn fat. Coconut water is also a low-calorie drink, which helps with weight maintenance and fits within most diet guidelines.

The fiber in coconut water is also important for helping digestion and providing bowel regularity. It’s also useful when you feel acid reflux and heartburn—it cools the lining of the stomach and esophagus, which will clear up the burning sensation, and can also help restore the body’s pH balance, which helps with acidity. Drinking it also hydrates the digestive tract, which can reduce bloating.

Coconut water has become the base of many different cosmetic products as well. Coconuts have natural antibacterial properties, so whether you drink coconut water or put it in a spray bottle and use as a refreshing mist for your face, it will go a long way in helping to fight and prevent acne breakouts and blemishes. Because coconut water is also super hydrating, your skin will drink up the moisture, too, resulting in a positively beautiful glow. It’s very easy to create beauty products at home using coconut water and a few other basic ingredients. 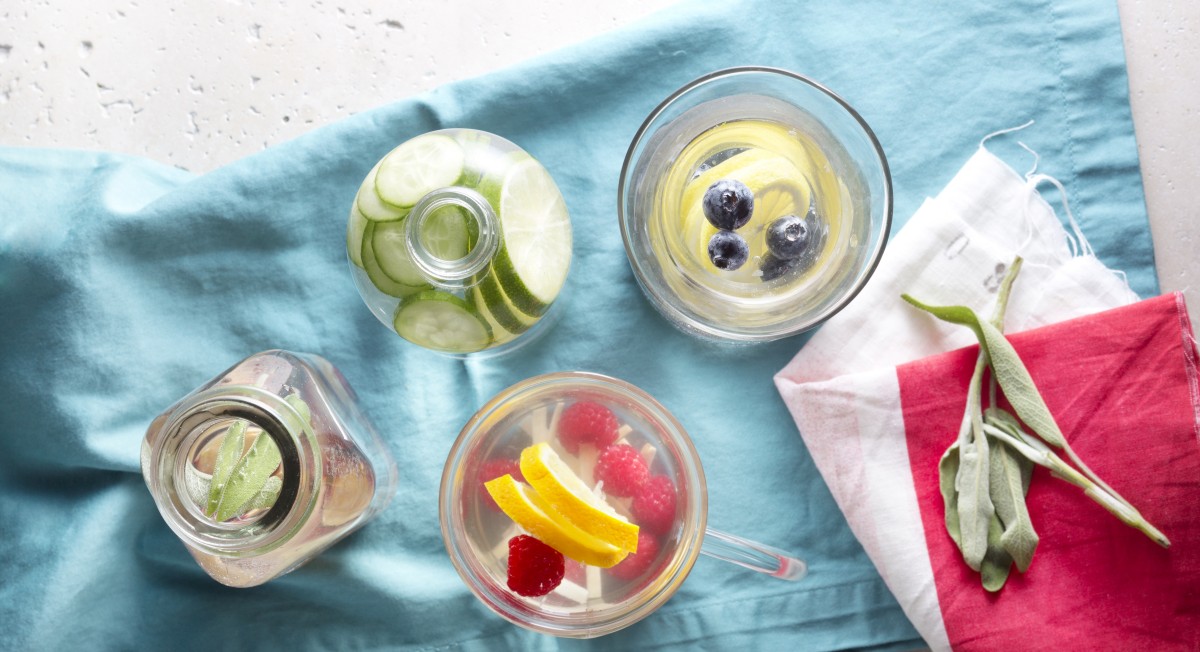 Not only is coconut water a super tasty and refreshing drink on its own, but it can also become a great ingredient for a number of other recipes, including smoothies, desserts, and even making your very own “Gatorade.”

But first it’s important to choose a brand wisely. Coconut water is available in many different forms, but the best ones for you are raw and organic. Also be wary of any coconut water that uses mature coconut water or ones pasteurized with heat, since it does not have the same nutritional value or taste. Once you have your pick, it’s time to get cooking!

The proof is in this pudding. Coconut water (along with coconut milk) adds a delicate, tropical flavor to this recipe that’s a delicious and nutritious alternative to store-bought tapioca cups filled with artificial ingredients. Chia seeds are also incredibly healthy and form the base of this sweet treat that is balanced by floral, sweet, and tart apricots.

Who says you need to drink your smoothie? This delicious, nutrient-dense smoothie bowl includes superfoods like kale and spinach, plus pear and coconut water that provide a little sweetness. Added ginger gives the mix a fresh zing. Go ahead and eat up with a spoon!

Coconut water is good for your health, but not everyone enjoys the taste. A great way to boost the flavor is to infuse it with fruit—just like the infused spa waters found in hotel lobbies and day spas. Great options include cucumber, mint, citrus fruit, blackberry, melon, and mango.

Sports drinks are good for rehydrating your body after a workout, but they also come with a lot of sugar and artificial ingredients. Coconut water is a great alternative, especially with this creative recipe that adds in extra nutrients and amino acids from lime juice, raw honey, himalayan salt, and chia seeds.

Coconut is not a botanical nut, though the Food & Drug Administration (FDA) lists it as a tree nut. It’s actually considered a fruit and most people with reactions to tree nuts can still enjoy it. But it’s probably always better to just ask your doctor if you have any concerns, especially if you have any kind of allergies or if you are pregnant. Otherwise, coconut water is a very tasty beverage that can be enjoyed by almost everyone.