Tahini: Nutrition, Health Benefits, and How to Use It

Peanut butter, almond butter, cashew butter, pecan butter, sunflower butter, hazelnut butter—these days, there’s a sandwich spread for just about every day of the week. Of course, your family might have a go-to fave, but odds are you’re overlooking the healthiest option out there.

We’re talking about tahini—a thick paste made up of finely ground sesame seeds, with a consistency reminiscent of peanut butter. It slides ahead of all its competitors, though, because its delicate sesame flavor works just as well in sweet dishes as it does in savory ones.

Like most nut and seed butters, tahini is loaded with vitamins and minerals, and most brands have zero added sugars or funky preservatives. Plus, it’s generally safe for those with nut allergies—teeny tiny sesame seeds don’t have the same allergenic properties as tree nuts, so most people who have to avoid PB+J can enjoy it. Never tried it? Prepare to have your mind blown.

True tahini has just one ingredient: sesame seeds. They’re nutritional powerhouses, but it can be tough eat enough of them to reap the full benefits. Good thing it’s so easy to down a spoonful in nut butter form.

Sesame seeds are loaded with vitamins B1, B2, B5, and B1—all essential to increasing your metabolic rate and regulating nervous system function. Studies also show the vitamin B in sesame seeds are excellent at protecting the liver and kidney from free-radical damage. Getting enough B6 is important for maintaining heart health as well—research shows that it helps to lower levels of “bad” cholesterol; and according to Harvard School of Public Health, B vitamins are crucial for fighting heart disease.

Tahini is also high in vitamin E, a fat-soluble antioxidant that’s been found to slow cognitive decline and the effects of aging on the brain.

Sesame seeds themselves are surprisingly high in calcium—about a quarter of a cup has 35 percent of the daily recommended value. And thanks to the ample amounts of magnesium (almost 32 percent of the RV), it’s way easier for the body to absorb and utilize that calcium.

On its own, magnesium is an essential mineral integral to over 300 enzymatic functions in the body, like the creation of DNA and RNA in cells and hormone regulation. And it’s important for bone health—without magnesium present, it’s much more difficult for the body to use calcium. It ends up getting stored in other areas, like in organs and muscles, and over time can actually become toxic. It’s why you’ll often see bottled calcium supplements fortified with magnesium—plain old calcium can’t do much for bone health without some help. Tahini contains both minerals in a 1:1 ratio, the ideal amount for optimal calcium absorption.

Born a supertaster? Chances are pretty good that your mom ate a lot of zinc-rich foods during her pregnancy. It turns out that this trace mineral, which is important for immune health, cell growth, and wound-healing, is also needed for the senses of smell and taste to develop during gestation, infancy, and childhood. Found in highest concentrations in animal proteins, zinc is also found in legumes and whole grains. But both of the latter also contain compounds known as antinutrients that actually hamper the body’s ability to absorb zinc—which explains why vegetarian and vegan diets are often zinc-deficient. Happily, a ¼ cup of tahini contains 25 percent of the daily recommended value of zinc.

How to Make Tahini

Making nut butter isn’t as complicated as you might think, and tahini is no exception. However, because sesame seeds are so small, it can take a little more time than grinding almond or peanut butter.

All you need is a cup of sesame seeds and a food processor, but to speed the process along, some recommend using a neutral oil to get a smoother consistency more quickly. To get started, add the sesame seeds to the food processor and let it run on a high speed for 3 to 5 minutes, scraping down the sides every so often. At this point, you can drizzle in a little oil to get the consistency that works for you. Continue to blend until smooth. Store in the refrigerator for a month. Separation is totally normal—just give it a good stir to distribute the oil before using.

Not willing to channel your inner chef for the sake of nut butter heaven? We get it—washing a food processor is tedious. Find a jar in the nut butter or global foods section of the grocery store—or on Thrive Market!

How to Cook with Tahini

Even if you’ve never had tahini on its own, you’re probably somewhat familiar with its taste—it’s a key ingredient in hummus. Alone, it has a slightly bitter, creamy, and nutty flavor that works well in savory dishes. But don’t get stuck on how well it pairs with proteins and veggies—with a little raw honey or coconut sugar, it works just as well as peanut or almond butter in sweet recipes. Just like any nut butter, it can be mixed into soups or sauces as a gluten-free thickener (bye, boring flour!) or even spread over toast and drizzled with a little maple syrup for a simple breakfast. 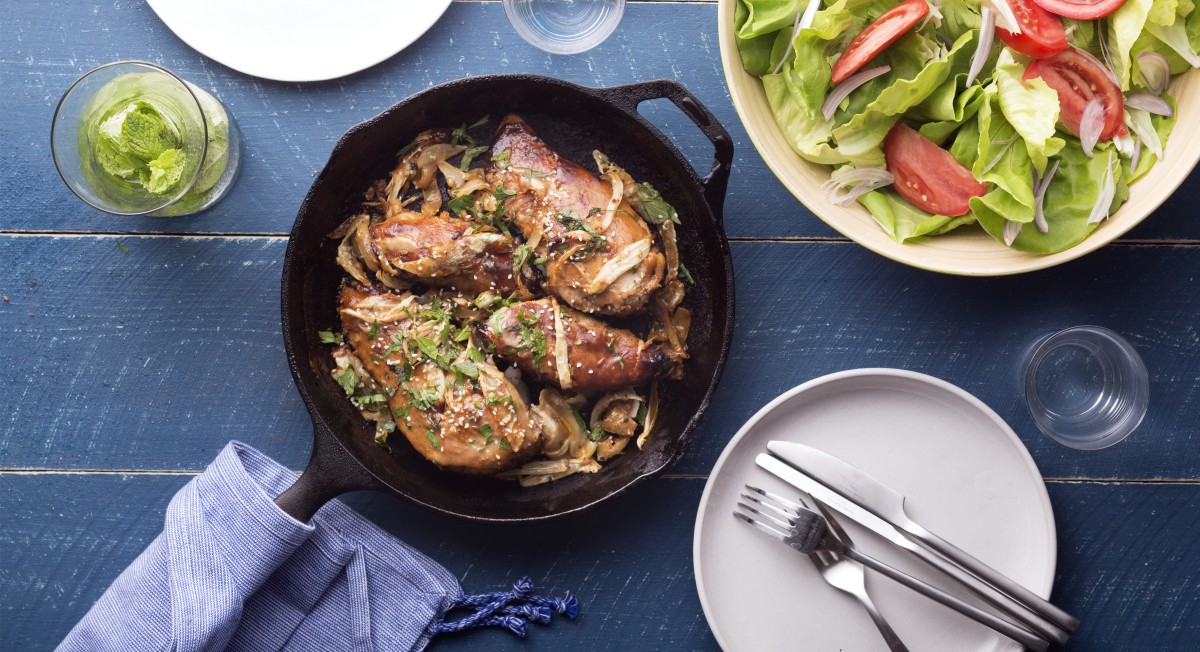 A garlicky lemon-tahini sauce balances the slightly sweet carrot-cashew base of this filling veggie bowl. Make a little extra and save it in the fridge for up to two weeks for a killer salad dressing.

Let’s face it—plain roast chicken can get kinda boring. Spice up your protein with a one-hour marinade. Cinnamon, cumin, and cayenne all make an appearance in a sauce that’ll keep meat juicy while imparting tons of flavor.

Every good host has a go-to appetizer dip. Cauliflower hummus even gives guacamole a run for its money—substituting cauliflower for chickpeas makes for a little lighter consistency than the traditional version, and tahini helps maintain that signature taste.

Tahini acts as the binding agent for these vegan, gluten-free falafel patties—fry them up in a little coconut oil for a crunchy, protein-rich dinner.

Eating clean? Take a page from The 5-Day Thrive Detox for this filling, nutritious meal. And sure, the bright orange sweet potato combined with verdant avocado is gorgeous, but it’s the sunny turmeric-tahini dressing drizzled on top that really makes us swoon.

Oven-roasting veggies brings out a subtle sweetness that’s magnified by a sprinkling of pomegranate seeds and complemented by a tart tahini-based vinaigrette.

Middle Eastern–inspired lamb meatballs are like nothing else—nutmeg, allspice, and cinnamon all make an appearance here—but the pomegranate-tahini dipping sauce elevates the entire dish to gourmet status. 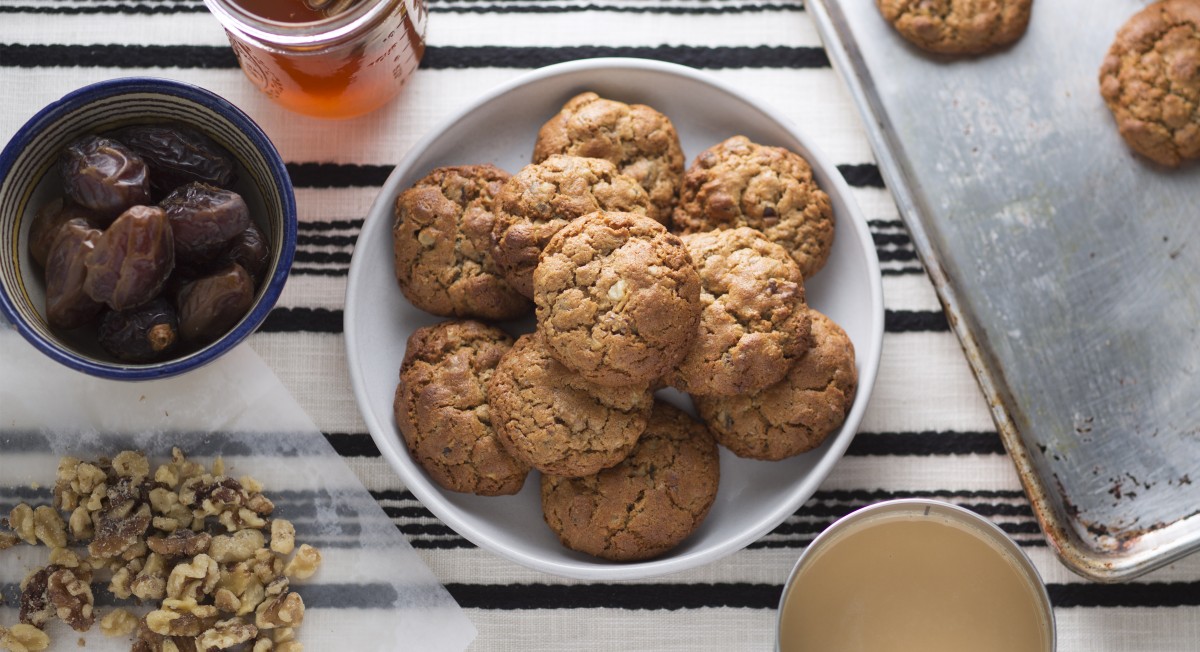 Gluten-free baked goods get a bad rap (“too dry, too bland, too difficult”). Clearly the naysayers have never sliced into a pear-and-tahini loaf—the two come together for a perfectly moist, lightly sweetened cake that makes a killer afternoon snack.

So it’s settled—not only is tahini totally versatile and delish, but it makes for a solid substitution when nut butters are off the table (whether you’ve got an allergy or you’re just eating Paleo). Not only is it easy to cook with, but it’s also incredibly nutritious, boasting fewer calories but more nutritional bang for your buck than plain old peanut butter. Make a batch at home or grab a jar for your pantry and start slathering it on everything—your body will thank you!