It started with coffee. When Starbucks first debuted the Pumpkin Spice Latte in 2003, the company probably had no idea the popular drink would pretty much take over the world.

These days, you couldn’t avoid pumpkin spice if you tried. It’s everywhere, including places you might never even expect—see pumpkin spice kale chips, vodka, and dog treats.

While pumpkin spice doesn’t work on everything, we do have a handful of highly recommended dessert recipes inspired by the infamous PSL drink. Below, find all the creative ideas, plus cooking tips, health benefits, and fun facts to warm up to this fall.

The creamy consistency and gorgeous orange hue shouldn’t be the only thing that attracts you to pumpkin. Just take a look at this list of health benefits!

Seven hundred and sixty-three percent. That’s how much of the recommended daily serving of vitamin A you’ll get in each cup of pumpkin. It’s also rich in the antioxidant beta-carotene, which the body converts into even more vitamin A. That’s good news for your eyesight, since the vitamin promotes healthy vision.

Reduces the risk of some cancers

Pumpkin contains plenty of vitamin K, which helps blood clot and maintains strong bones. Some studies also suggest regular consumption of the vitamin may reduce your risk of developing or dying from cancer.

Just one cup of pumpkin provides 19 percent of the recommended daily amount of iron—a mineral that’s crucial to healthy immune function. It’s also a good source of vitamin E, another nutrient crucial to the immune system.

It’s not all about the orange flesh, either—pumpkin seeds are just as good for you. For starters, they’re loaded with multiple forms of vitamin E, and do incredible things for your hair, skin, and nails. One study of men with alopecia who took pumpkin seed oil over six months showed a 40 percent increase in new hair growth. These little seeds also contain a wide array of antioxidants that fight free radicals and promote skin healing.

Most of us aren’t eating enough fiber. According to the Harvard School of Public Health, adults need 20 to 30 grams per day, but the average person only gets 15. Enter pumpkin—one cup of the purée contains 7 grams, setting you on the right track for a fiber-rich day. Not only does fiber keep you full for longer and aid digestion, but it can also reduce your risk of heart disease and some cancers.

It’s almost unbelievable: one cup of pumpkin has just 83 calories. That’s pretty impressive. Since it’s so flavorful and filling, yet shockingly low in calories, pumpkin is a perfect choice for anyone looking to lose or maintain weight. 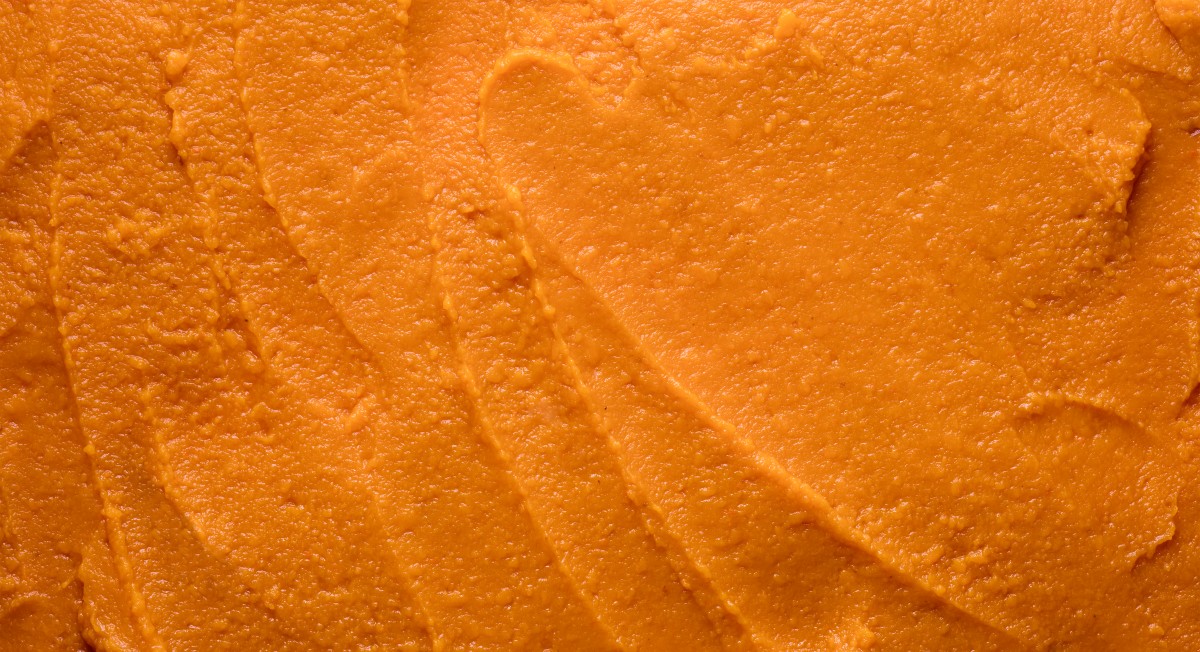 Before you start cooking, you have to make sure you have the best raw ingredients. There’s a big difference between the pumpkins you pick yourself, the ones at the supermarket, and the canned stuff. Here’s what you need to know about choosing the right kind—whether you opt for a can or go all out and roast your own gourd.

You’ve committed. No cans here—you decided to go au naturel and cook fresh pumpkin. Good for you, but don’t think you can pick up any old gourd. Though all varieties are edible, some work better than others.

The kind you find at the pumpkin patch are called carving pumpkins, and they tend to be stringy and watery. Not to mention, the flavor is unbelievably bland. You can roast the seeds from your jack-o-lantern, though—more on that later.

You’re looking for dense, smooth flesh with a naturally sweet taste. Look for any labeled sugar pumpkins or pie pumpkins, or pick one with of these brand names:

Prepare a fresh pumpkin like you would any other hard winter squash. Roast or bake it whole, peel the flesh and steam it, or cut it into small pieces to cook on the stovetop.

There’s an important distinction on the label: pumpkin purée or pumpkin pie mix. To the inexperienced eye, they might appear the same—but choosing the wrong one could have less than desired results.

Unless you’re making a pie, this is what you want to buy. Canned pumpkin purée is nothing but plain pumpkin that’s been cooked and then puréed. Since pumpkin purée is not sweetened or seasoned, it’s ready to go into any recipe—breads, muffins, cakes, or cookies.

Only buy pumpkin pie mix if you’re making a plain pumpkin pie—and even then, plain pumpkin is usually a better option. Canned pie mix or filling has already been sweetened and seasoned with cinnamon, cloves, allspice, and other spices. It’s fine on its own, but can wreak havoc in other recipes. Many new cooks assume the two are interchangeable, only to wonder why the recipe came out sickeningly sweet. When in doubt, stick to plain pumpkin purée.

How to make your own pumpkin pie spice

Most pumpkin desserts include another crucial ingredient: pumpkin pie spice. You can find this blend of five warming spices in most supermarkets or make it yourself. You probably already have the ingredients at home, and mixing up only the quantity you need helps cut down on waste. Plus, it saves a little room on your spice rack!

Combine all ingredients in a small jar. Seal and store for up to six months.

There’s a chill in the air, the leaves have started to change, and passersby are bundled up in sweaters and scarves. It’s officially fall—the perfect time of year for sweet pumpkin desserts. From classic pumpkin pie to more inventive treats, there are so many ways to enjoy fall’s favorite gourd. Why not start with seven of our favorite pumpkin-centric recipes?

This list wouldn’t be complete without pumpkin pie. Though the pilgrims probably didn’t invent it in time for the first Thanksgiving, the pie has been a mainstay of fall and winter holidays ever since. This updated version laced with maple and baked in a gluten-free pecan-walnut crust elevates a classic recipe.

It’s tough to beat a warm, tender pumpkin loaf straight from the oven. A whole can of pumpkin purée gives this bread a moist texture and light, fluffy crumb. Spiced with cinnamon and studded with currants, its beauty is in its simplicity. Swapping in gluten-free all-purpose flour keeps the recipe safe for anyone with Celiac disease or gluten sensitivities, but you could certainly stick with all-purpose wheat flour, if you prefer.

Grab one of these hearty oat cookies for a healthy treat or filling snack. Ground walnuts and oat flour sub in for regular wheat flour, while coconut oil and pumpkin purée add the moisture you’d typically get from eggs. Chewy and nutty, these cookies have the texture of oatmeal cookies with the flavor of pumpkin pie. Win-win!

When you carve your jack-o-lantern, save the seeds—they make a delightfully crunchy snack when roasted. After you’ve washed and dried the seeds, toss them in a medley of warming fall spices and a touch of maple syrup. Roasting adds a slightly nutty flavor and crisps up the outer shell. The spiced seeds are just as addictive as fresh popcorn! 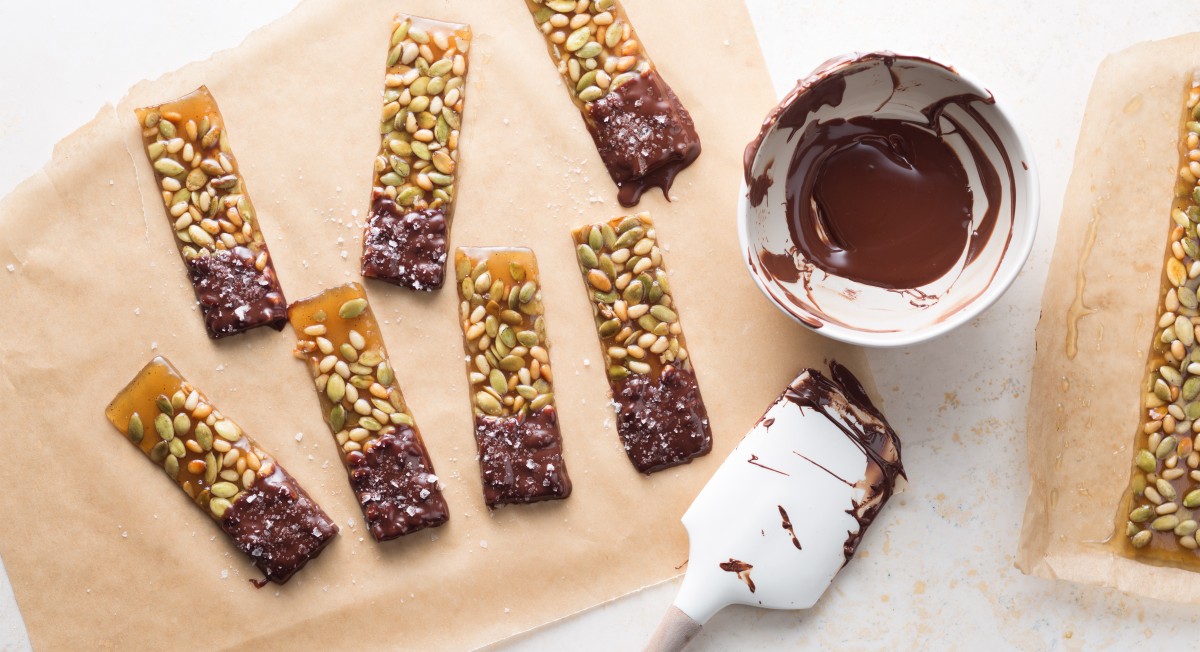 For a sweeter treat, turn your pumpkin seeds into a crunchy, sticky brittle. It’s a flavor-forward update on the peanut brittle beloved by grandmothers everywhere. Cardamom, pine nuts, and a dark chocolate coating elevate the simple candy to gourmet. A sprinkle of flaky sea salt over the top completes it. Your holiday guests won’t be able to get enough of this decadent candy.

For all the seasonal flavor without any of the added sugar, blend up this creamy smoothie. A frozen banana gives it the thickness of gelato, and a few dates provide all the sweetness you need. It has all the usual suspects—cinnamon, ginger, cloves, nutmeg, and allspice—plus a sprinkling of chia and hemp seeds for extra protein. It’s healthy enough to eat for breakfast, but indulgent enough to work as dessert, too. Hint: it’s a great way to use up leftover pumpkin purée!

OK, this recipe technically isn’t a dessert. But these vegan and gluten-free pancakes are too good to be left off the list. Natural food chef Cassandra Bodzak developed this recipe for fluffy, golden-brown flapjacks topped with a maple tofu cream cheese frosting. Pro tip: Serve your short stack with a layer of frosting between each pancake for total breakfast perfection.