It’s there, tucked away in a dark, forgotten corner. Shoved to the back behind cartons of coconut milk, pouches of grass-fed beef jerky, and jars filled with raw macadamia nuts. Once, it was the star of every lazy Saturday morning breakfast. But in a Paleo pantry, where does pancake mix fit in?

It’s almost painful to think about. A hot, golden short-stack drizzled with maple syrup is a breakfast of the past. You’re Paleo now. Pancakes are off-limits, forever.

Not exactly, drama queen. Turns out you don’t need to blacklist all the old breakfast favorites just because you’ve decided to eat like our Paleolithic ancestors. You just need a really good, versatile Paleo pancake recipe in your life.

If you’re already a full-fledged Paleo convert, you know that most breakfast foods like oats, cereals, toast, yogurt, and even some smoothies are no-gos. This leaves a few food groups that are ideal for a morning meal:

Easy! Heat up the skillet and scramble up some eggs and bacon and you’re set, right? But what happens when you get bored with omelettes, frittatas, and scrambles, and find yourself craving a pre-Paleo breakfast like sugary cereal and milk? You whip out the Paleo pancakes.

A classic pancake recipe involves flour, milk, eggs, vegetable oil, and a bit of sugar—decidedly NOT Paleo. Here’s how you can change up the ingredients to flip this weekend brunch staple on its head. 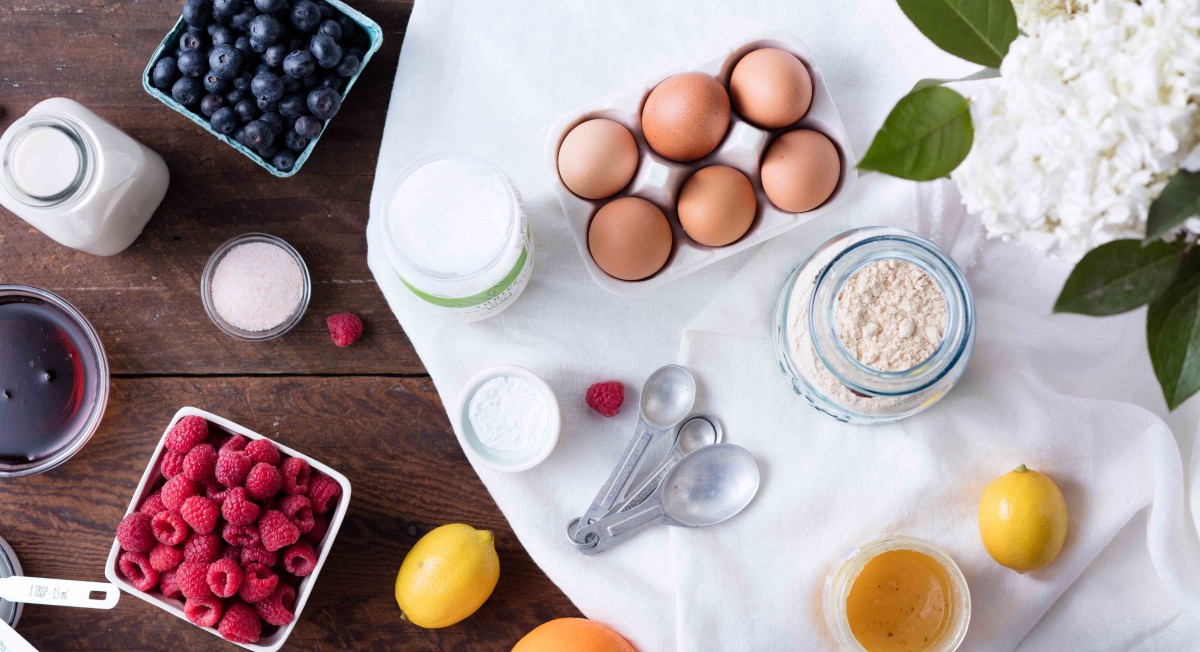 Made of coconut meat that’s been dehydrated and finely ground—a process that causes the coconut to lose a lot of its dietary fat and water—coconut flour is almost flavorless. That fact makes it a great gluten-free substitute for regular flour, because it won’t mess with the taste or consistency of whatever you’re creating in the kitchen.

It has more fiber and protein than wheat (4 grams and 1 gram per tablespoon, respectively), and it’s gluten-free. It’s also a great source of manganese and lauric acid. Manganese supports bone and thyroid health and helps you absorb nutrients like choline and biotin—both of which help your body use fuel more efficiently, which results in giving you more energy. Lauric acid promotes healthy, glowing skin.

This one’s probably already in your pantry because it’s just so versatile. And because vegetable oils aren’t part of the Paleo diet, coconut oil often ends up becoming the cooking fat of choice for primal eaters. Not only is it ideal for frying and sautéing thanks to its high smoke point, but it can also replace butter in a 1:1 ratio in baking recipes. Plus, coconut oil makes any dish you toss it into more nutritious.

Most of the buzz around coconut oil’s nutritional capacity has to do with MCTs, or medium chain triglycerides. MCTs are fats that are quickly metabolized in the liver so they’re immediately available as an energy source; they’re also easier to burn off and harder to store in the body. Some MCTs, like lauric acid, work to keep you healthy by eliminating disease-causing microbes and lowering inflammation. There’s evidence that coconut oil might also have cardioprotective powers, too, as it can help maintain healthy cholesterol and blood lipid levels.

In this recipe, it helps the batter retain moisture as it cooks, and keeps pancakes from sticking to the pan. A good fry is key to locking in that signature golden color!

OK, we know what you’re thinking.

If you’ve been living a honey-less existence up to this point, you might want to sit down for this one: Raw honey is, in fact, Paleo.

Because it’s unprocessed and comes directly from the hive, there’s a good chance that our ancestors enjoyed it in it’s natural form. And although it’s considered a simple carbohydrate like table sugar, honey has a lower glycemic index, so it won’t cause blood sugar levels to skyrocket. Plus, it hasn’t been heated or pasteurized, so it retains its micronutrient density. Pure, raw honey contains iron, zinc, potassium, calcium, phosphorous, magnesium, selenium, B6, thiamin, riboflavin, pantothenic acid, and niacin.

The proliferation of non-dairy alternatives over the past few years has made ditching cow’s milk easier than ever—good news for the Paleo community. Almond milk takes the place of low-fat dairy in this recipe because it easily folds into batter and has a very mild flavor.

In an ideal world, you’d make your own almond milk before whipping it into your pancakes. Why? Because you’ll get the chance to soak the almonds, a process that deactivates the antinutrients that live on the outside. Antinutrients—which exist to protect plants like nuts from predators—are compounds that keep your body from absorbing nutrients, and they can cause inflammation and digestive issues in humans.

You can make your own almond milk using a high-speed blender. Combine 1 cup almonds (soaked in water overnight), and 2 cups water, and blend on the highest setting for two minutes. Then pour the mixture through a cheesecloth or fine mesh strainer. Voila! Fresh, creamy, homemade almond milk. Note, it lasts for just a few days in the fridge, so only make as much as you think you’ll need.

If you don’t have the foresight to soak your almonds overnight, store-bought almond milk should be fine as long as there aren’t any chemicals, added sugars, or artificial ingredients present on the label, like this one.

Alright, it’s time to unveil the ultimate Paleo pancake. Filled with protein, fiber, and healthy fats, this recipe makes it healthy to start every day with a short stack. 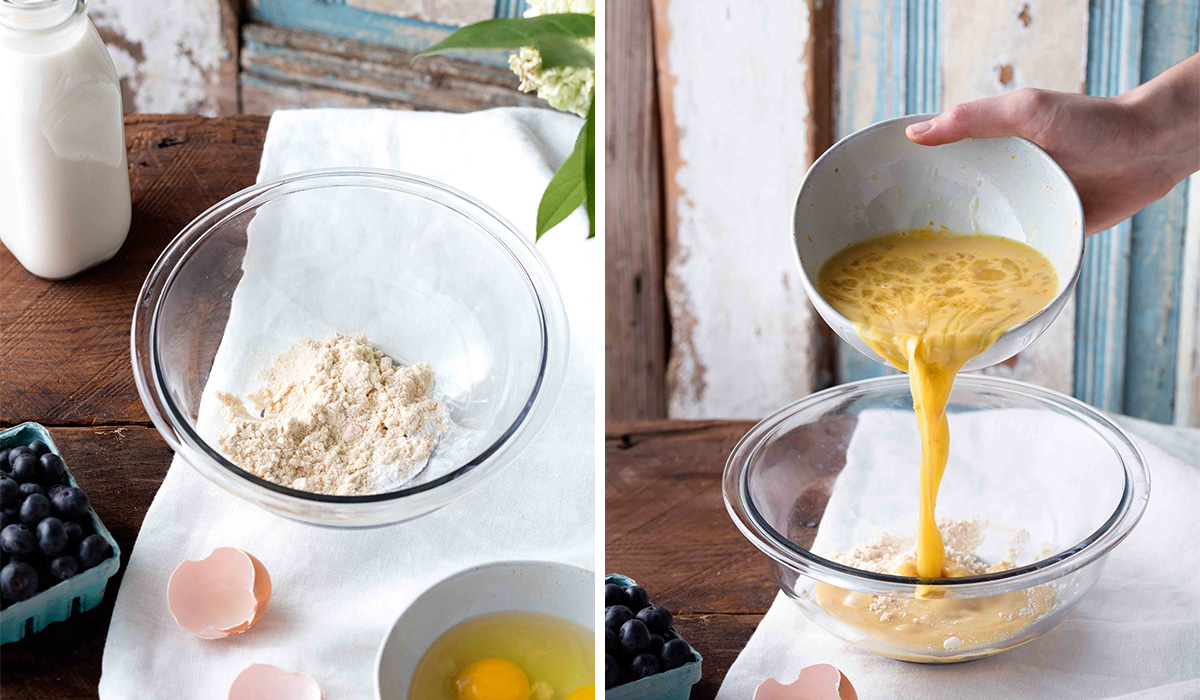 Heat 1 tablespoon coconut oil in large skillet over medium heat. Pour small 1/4 cupfuls into the skillet and cook until bottom has turned golden brown, 2 minutes. Flip and cook until browned on other side. Continue cooking until all batter has been used, adding more coconut oil to skillet as needed. Serve warm with maple syrup or coconut nectar. 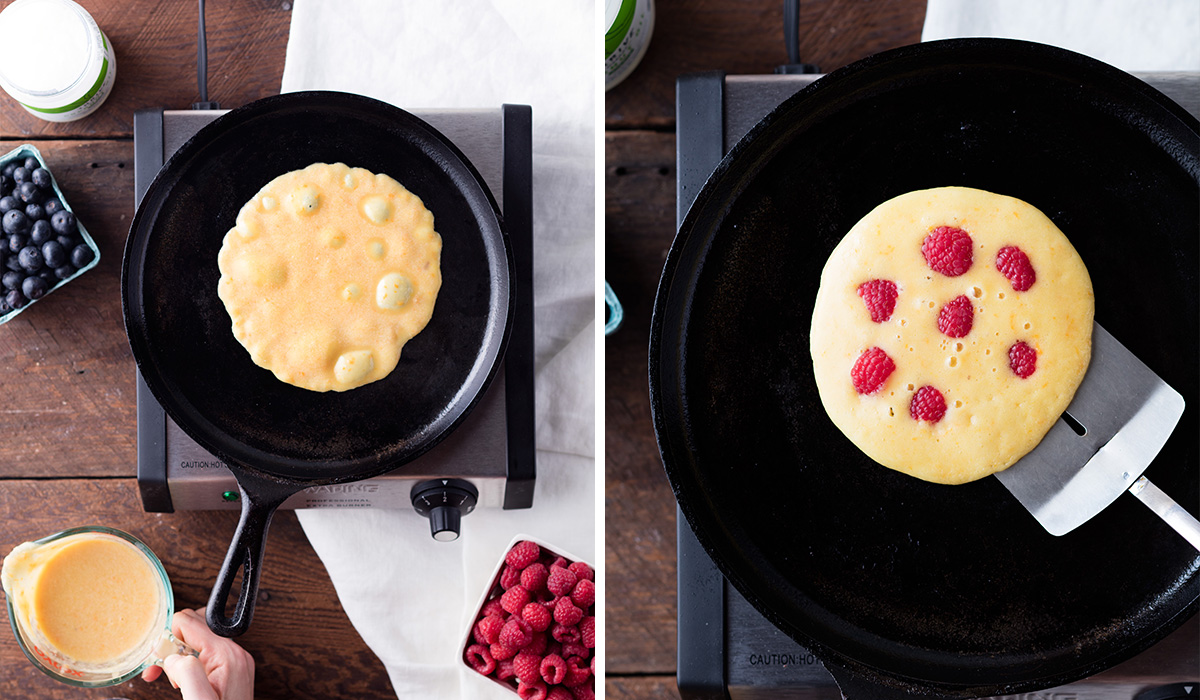 Basic recipe—check! Now that you’ve got it down, you can easily transform these pancakes to match your cravings.

Blueberries, raspberries, even pineapple slices work well with the mild vanilla flavor in this recipe. Make batter as usual, and begin cooking on one side; as soon as batter begins bubbling, add berries or small fruit slices into the still-wet side (Tip: try cutting berries in half to make them lay more flat in the batter). Then immediately flip and allow to cook thoroughly. Top with maple syrup or fresh fruit and coconut for a sweet start to your day!

Simply omit the vanilla extract for flapjacks that become the vehicle for bacon, over-easy eggs, and any sauteed vegetables. Try savory pancakes rolled up, pigs-in-a-blanket style.

Going Paleo doesn’t mean that you have to eschew all of your favorite “bad” foods—it just means that you might need to get a little more creative with the ingredients to make sure they suit your new dietary guidelines.