Stomach trouble is no fun. From an indulgent restaurant meal to traveling across time zones, our digestive systems are often put to the test. While it’s perfectly normal to experience digestive upset now and again, persistent and uncomfortable symptoms may be alerting you to something more chronic like SIBO. While often a complication of stomach surgery, SIBO can also be caused by other factors like a structural issue around your small intestine (scar tissue, for example) or certain medical conditions including Crohn’s disease, celiac disease, and diabetes.

SIBO (small intestinal bacterial overgrowth) is an imbalance of the microorganisms in your gut that maintain healthy digestion. Essentially, a SIBO diagnosis means that bacteria in your small intestine are overgrown, causing an imbalance in your gut flora. Having bacteria in your gut isn’t the problem (we need it!), but too much, or the wrong kind, can get in the way of healthy bacteria doing its job. “More bacteria can mean more gas and other byproducts, which often triggers diarrhea,” The Cleveland Clinic explains. “The bacteria also consume proteins and vitamin B12 meant for us, and bile salts that are supposed to be there to help you digest fats.” The result? Poor digestion, reduced absorption of nutrients, and a variety of GI symptoms.

Here are some of the most common symptoms of SIBO, which can sometimes overlap with other gastrointestinal conditions. Be sure to check in with your doctor if any of the following symptoms are persistent:

Symptoms of SIBO vs. IBS

Unlike SIBO, which impacts the small intestine, IBS affects the large intestine. Symptoms for both conditions are similar and non-specific (including cramping, bloating, gas, and diarrhea). Some research suggests that some symptoms associated with IBS may predispose someone to SIBO, though evidence isn’t conclusive. A randomized study found that 84 percent of patients who met the criteria for IBS had an abnormal lactulose breath test consistent with SIBO. However, other research has failed to replicate these findings, making the correlation between SIBO and IBS a difficult one to define. Adding to the complexity, Cleveland Clinic says that with SIBO, bacterial overgrowth can be clinically verified and treated, whereas IBS is a “functional disorder that is diagnosed when your symptoms can’t be clinically explained.”

How is SIBO Diagnosed?

To check for SIBO, your doctor may order one or both of these common tests:

In addition, you may also need to run blood tests to look for vitamin deficiencies. If your doctor is concerned about structural abnormalities, they’ll likely request x-rays, CT scans, or an MRI.

If you work with a functional practitioner, they might have you start with a GI-MAP test. Although you can’t officially diagnose SIBO with a stool test, the GI-MAP may still be beneficial for those in the early stages of diagnosis, especially since SIBO has symptoms that can be related to a host of various GI issues. A GI-MAP helps detect what’s going on in your gut microbiome (like malabsorption) and may prevent you from treating the wrong gut problem.

There are several ways to treat SIBO depending on whether you work with a conventional doctor or someone who specializes in naturopathic medicine.

The Best Diet for SIBO

One approach to managing SIBO is reducing overgrowth by removing bacteria’s favorite foods, including fruits and starchy vegetables, sugars and sweeteners, dairy products, and grains. A low FODMAP diet is often recommended to reduce digestive upset. FODMAPs is an acronym for a group of carbs found in certain foods that may trigger digestive issues, so the diet is centered around avoiding these culprits. Since FODMAPs are found in a variety of common ingredients (such as cauliflower, onions, garlic, wheat, and legumes) sometimes this is easier said than done. However, reducing your FODMAP consumption can go a long way to support your wellness, and brands like Fody Foods make it even easier to enjoy some of your favorite dishes without feeling deprived.

Prep for your low FODMAP diet with staples from ThriveMarket.com. 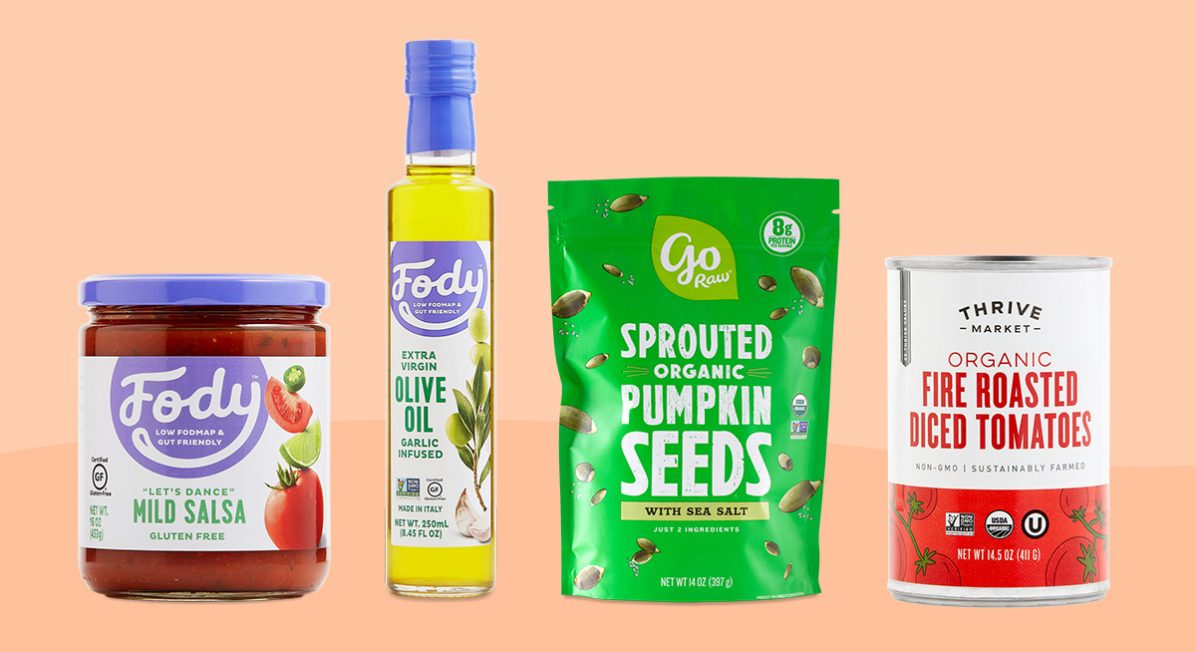 Spice things up with Fody’s salsa made with tomatoes, water, cilantro, cider vinegar, and other diet-friendly ingredients.

Crown Prince’s smoked oysters are hand-packed in olive oil and deliver 1200 mg of omega-3s per serving.

Roasted over an open flame, diced tomatoes add delicious smoky flavor to your next sauce or stew.

Garlic on a low FODMAP diet? This infused oil is the first of its kind to be tested and certified by Monash University, which means it’s less likely to cause IBS symptoms.

Add crunch and protein to your next dish with these lightly salted, sprouted pumpkin seeds that are baked at a low temperature to preserve nutrition.

These bars are filled with rich dark chocolate, crunchy nuts, and a hint of sea salt, making it a low FODMAP treat you can indulge in whenever the mood strikes.