Getting diagnosed with celiac disease can lead to a sort of existential food crisis. Instead of questioning what life really means, you might be left wondering: “What can I eat? Why does everything have gluten? What’s the point of living if I can’t eat bread?”

It can be earth-shattering, really, because all of the sudden it’s apparent just how many foods contain your new food arch nemesis. Soy sauce. Blueberry jelly. Even oatmeal … maybe? Oats are sort of a mystery food, and some people consider their gluten-free status as up for debate. Good news—oats don’t contain gluten protein, but that doesn’t mean they’re totally safe. Here’s what you need to know about them.

Gluten is comprised of two proteins found in grain—glutenin and gliadin. These two proteins are responsible for most of the negative side effects that people with gluten sensitivity or celiac disease experience.

They also give dough its chewy, spongy texture, and gives it the structure it needs to rise. Because they lack that protein so important to structure, gluten-free products without it don’t always have the same mouthfeel or flavor.

Celiac disease is actually an autoimmune response; the body treats the proteins like an invader, and in the process ends up attacking gluten and the lining of the gut. This leads to damage of the intestinal lining, as well as other nasty side effects like bloating, diarrhea, constipation, headache, tiredness, skin rashes, depression, and weight loss. Gluten sensitivity, which can have similar symptoms, isn’t an autoimmune response. It causes inflammation, but none of the internal damage that celiac does.

The only way to effectively treat celiac disease or a sensitivity is to avoid gluten altogether—most of the time, the gut will eventually repair itself. If you have a sensitivity, no matter how big or small, it’s probably best to stay away from products that contain gluten or could be cross-contaminated with it.

Foods that have gluten

Gluten proteins are found in grains—but not all grains contain gluten. Sounds like a confusing SAT question, right? If you’re trying to avoid the stuff, consult this list of grain products that definitely contain gluten:

You’ll also need to be careful of processed and packaged foods that might have been cross-contaminated during manufacturing. Usually products will proudly display a “gluten-free” label, but check the label below the nutrition facts to confirm that an item is truly safe from gluten.

Fortunately, you can still get your grain on with GF varieties. Stick the following list to satisfy your carb cravings without the nasty side effects:

Also check out our expanded list of gluten-free foods to get a sense of what’s safe to eat.

Why are some oats gluten-free?

You might’ve noticed that oats are on the approved list, but they’re the only ones with a “gluten-free” moniker. Turns out that not all oats are created equal. A warm bowl of oatmeal is considered one of the healthiest breakfast options around, but it might set off alarm bells for a newly GF eater. Depending on which brand, type, and flavor of oats you pick up, it’s possible that they are off-limits.

Generally speaking, oats are considered safe for those with gluten sensitivities—less than 1 percent of people with celiac will have a reaction to certified gluten-free oats (more on that later). The problem is, a lot can go wrong during harvesting and processing.

Oats are often grown near other grain crops like wheat, barley, and rye—they’re sometimes even planted in the same soil where wheat was grown the previous year. Grains that contain gluten can contaminate oat crops if they grow near each other, and often oats that are planted in former wheat fields contain gluten.

And that’s just the beginning—a lot of cross-contamination occurs at processing facilities where crops are rinsed, prepared, and packaged. There’s a lot of room for error during these processes—small amounts of wheat might get mixed in with oats, or the same equipment might be used without sterilization between grains.

Although it’s widely accepted that oats are safe for people with celiac disease, some researchers believe that those with gluten sensitivity should still avoid them because they have proteins that can cause a similar inflammatory reaction. These avenin proteins make up about 13 percent of the total protein found in oats. Although they can cause a slight reaction in a small population of people with celiac disease, studies have shown gluten-free oats are safe to eat.

How do you find gluten-free oats?

OK, by now it might seem like finding celiac-friendly oatmeal is impossible and eating oats is risky. But don’t fret—it’s actually pretty easy to find brands that won’t leave you doubled over in pain.

Certain companies like Bob’s Red Mill, Glutenfreeda, and Arrowhead Mills carefully source their oats and boast a certified gluten-free label. These brands guarantee their crops are grown on safe farmland, processed in GF factories, and tested and certified by a third party. In fact, Bob’s Red Mill is so concerned with the safety of its product that every delivery of oats is tested for cross-contamination before getting packaged.

If you can get your hands on certified gluten-free oats, you should go for it. They’re a super-versatile ingredient to have in your pantry for all types of GF recipes, and they’re also incredibly good for you.

Oats are one of the best sources of beta-glucan, a powerful type of fiber that can be particularly beneficial to cholesterol. Over time, daily servings have been shown to lower cholesterol by up to 23 percent. Oats also contain the antioxidant avenanthramide, which keeps free radicals from eroding LDL cholesterol. Combined, these two compounds can have a real impact on the numbers your cardiologist tests for.

Oats are also helpful for maintaining a healthy weight because of their high fiber-to-calorie ratio. The average bowl of oats contains about 4 grams of fiber, nearly 20 percent of the daily intake recommended by the FDA. Fiber keeps the gut and digestive tract healthy and also keeps you fuller for longer after eating.

Plus, eating more fiber in the form of whole grains can balance and maintain blood sugar. Complex carbohydrates like oats release glucose into the bloodstream more slowly, preventing major blood sugar spikes—which make oats a smart choice for anyone trying to optimize their energy levels. 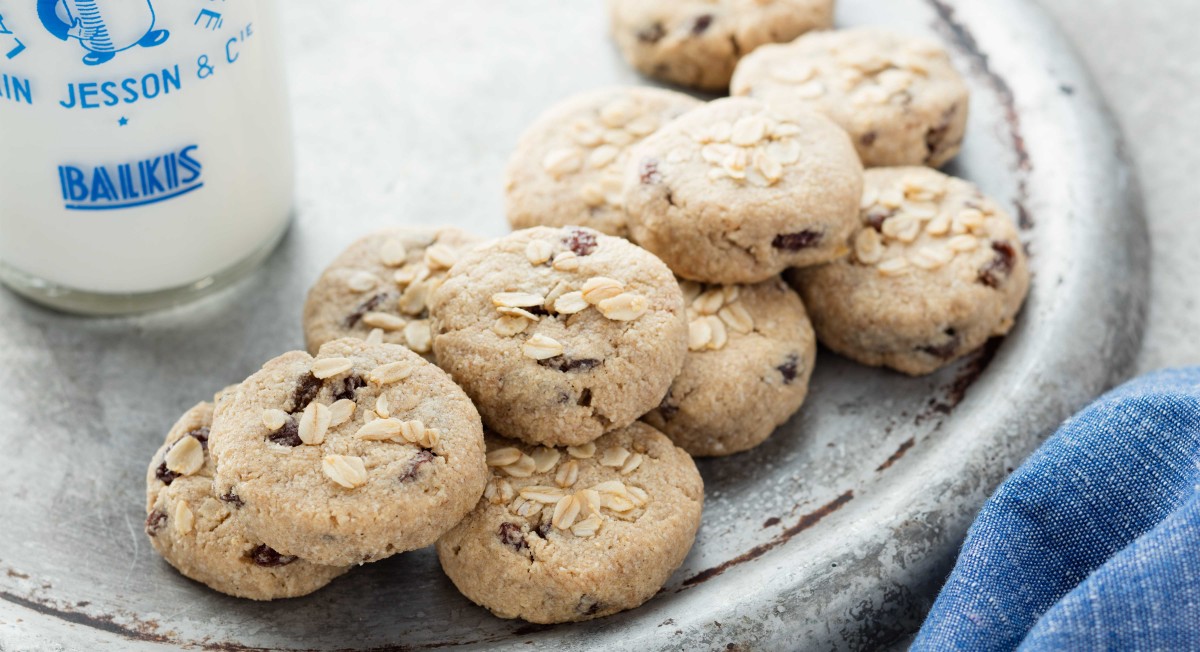 Plain oatmeal is one option, but there are so many ways to mix it up that you could possibly eat oatmeal every morning and never get bored. Below are some ideas to get you started. And ground gluten-free oats make an awesome substitute for regular flour in baked goods—bring on the GF cookies!

Apple Pie Overnight Oats
Breakfast doesn’t get any easier than overnight oats. Just mix up a few ingredients, let it sit in the fridge overnight, and wake up to dessert for breakfast!

Carrot Cake Oatmeal
The name “oatmeal” doesn’t really do this recipe justice—the final product is a sweet, not to mention gorgeous, spice-filled pudding with a flavor to die for. Make a batch to impress the brunch crew!

Homemade Instant Oatmeal
The instant oatmeal packets you’ll find on most grocery store shelves are loaded with sugar and artificial flavors, which is not exactly the best way to start your day. Customize your morning bowl with your favorite combination of nuts, spices, and dried fruits for a way healthier take on those maple-brown-sugar packets.

No-Bake Chocolate Cookies
These treats are filled with so many good-for-you ingredients (spirulina and cacao powder, to name a few) that we won’t be surprised if you end up eating them for breakfast.

Vegan Oatmeal Raisin Cookies
Soft, chewy oatmeal cookies are a little better for you—gluten-free and vegan—than the version you loved as a kid, and just as tasty as you remember.

Crispy Oat Cookies
Toffee and oatmeal cookies come together in the form of a crunchy, slightly salty snack that’s perfect for an afternoon pick-me-up.

Strawberry Oatmeal Cakes
Whipping up a beautiful brunch that everyone can eat has never been easier! Our gluten-free, vegan strawberry oatmeal cakes look as good as they taste—dress ’em up with a handful of berries and a drizzle of almond milk and you’re good to go!

Raspberry Jam and Oat Bars
Sweet raspberry jam, crunchy nuts, and a streusel-like crust and topping are a winning combo.  With this recipe, you’ve got the most heavenly oat bars on your hands!