When summer turns to fall, we get extra excited about one specific thing: pumpkin spice season! Sure, there are golden leaves and cooler days, back-to-school vibes and holidays to plan for, but here at Thrive Market we’re always giddy about putting our favorite spice mix into all the things. We’re sharing the basics about what’s actually in the mix (can you name all the spices?), plus nine favorite recipes—including our favorite pumpkin spice latte and moist pumpkin bread recipe— to help you make the most of the months ahead.

What Is Pumpkin Spice?

Homemade pumpkin pie spice mix is traditionally made with cinnamon, nutmeg, and cloves, although many homemade recipes (including ours, below) include ginger and allspice, too. While many people associate beloved pumpkin pie recipes with Thanksgiving meals, Scientific American reports that pumpkin pie probably wasn’t served during Colonial times: “While we believe that American colonists were eating pumpkins simply because it would have been a prolific food source, their ovens would not have been capable of creating modern crusts as we know them.” Pumpkin spice’s modern rise to fame began in the 1950s, when McCormick first sold a blend on supermarket shelves. Since then, home cooks and popular brands alike have discovered myriad ways to make the most of these flavors, from cult-favorite lattes to family-secret pumpkin spice cookie recipes.

What Is in Pumpkin Pie Spice?

Straight from the Thrive Market Test Kitchen, this is the spice blend we reach for regularly between September and March. Pro tip: don’t be shy about doubling or tripling the recipe so you’ll have enough for several months. The mix also makes a thoughtful hostess gift.

Instructions
Combine all ingredients in a small jar. Seal and store for up to six months.

A DIY spice mix is just the beginning. To celebrate all things pumpkin, stock your pantry with these favorite fall ingredients. 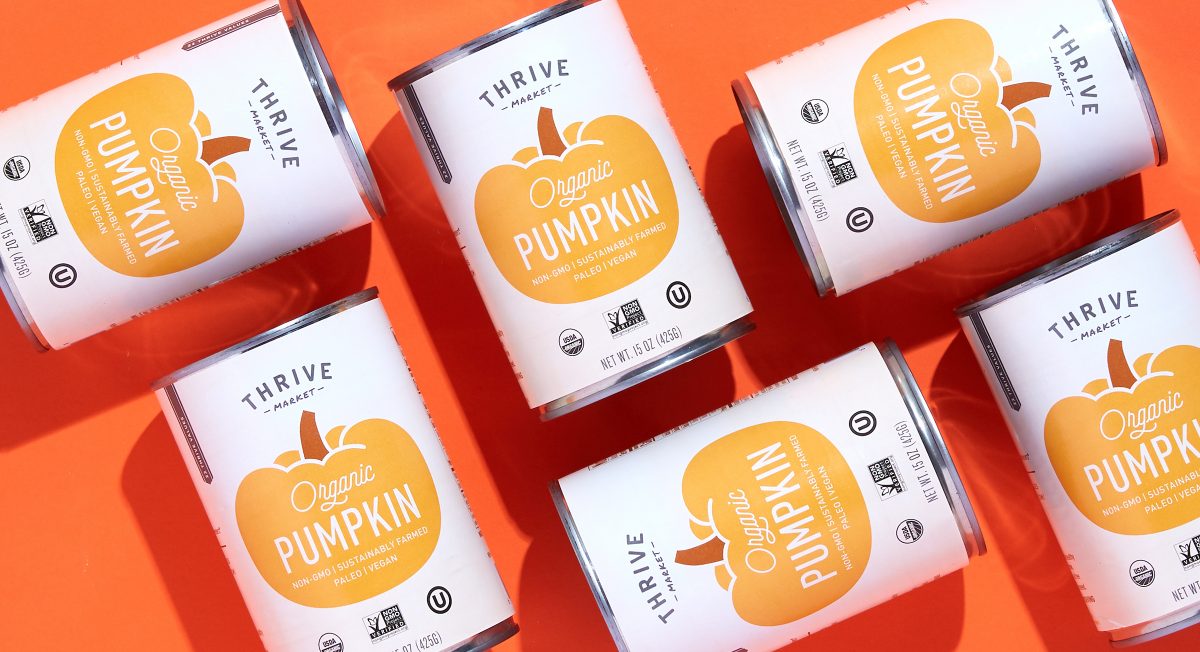 No need to wait until pumpkin season to bust out the pumpkin spice cake mix. Wondering what makes Simple Mills such a gluten-free favorite? Just ask Thrive Market member Barbara, who shares this mix “makes the softest, moist bread in literal minutes. It’s a new staple in my pantry!”

Not into the DIY route? No problem. Primal Palate does all the work for you with its pumpkin pie spice, made with organic ingredients including Saigon cinnamon, nutmeg, and cloves. If you need a few ideas, just turn to member Carly from New York, who uses it all year: “I put it on top of and in pancakes, on French toast, and my absolute favorite way to use this (besides baking) is a sprinkle on top of my morning coffee.”

Ask Thrive Market staffers what they keep on hand this time of year and you’ll definitely see pumpkin purée on the list. Ours is made with vine-ripened, sustainably farmed pumpkins, and it’s not just for humans. In addition to using it for recipes, member Shelly from Wisconsin uses it as a supplement for her dogs.

Your search for the perfect homemade pumpkin spice latte ends here. In addition to all the usual suspects (hello, ground cinnamon and nutmeg), this drink adds turmeric to the mix for extra nutrition.

Upgrade your morning coffee with a steamy pumpkin pie spice latte that tops off your favorite brew with real pumpkin, spices, and maple syrup for a touch of sweetness.

It’s time to switch up your usual frozen sip with a pumpkin pie-inspired beverage. Let your blender do the work of breaking down dates, pumpkin, spices, coconut milk, hemp seeds and a frozen banana—it’ll taste like dessert for breakfast!

No need to use your own spices here—this batch of seasonal cookies is made with a mix from Simple Mills that’s laced with cinnamon, nutmeg, and clove. The cookies are satisfying on their own, but don’t miss the irresistible and creamy hazelnut spread.

Kids (and adults) will love this vegan version of a classic toaster treat, complete with an autumnal spin. The filling combines pumpkin purée with spices like ginger and nutmeg, then drizzles each pie with a sweet maple glaze.

If you believe no holiday meal is complete without pumpkin pie, you’ll love our paleo-friendly version. The nutty crust features pecans and walnuts, while the creamy filling comes together with pumpkin purée, eggs, coconut cream, and plenty of spices.

This gluten-free and vegan recipe makes use of quinoa flour as the base, plus a generous two tablespoons of pumpkin pie spice for real fall flavor. The tofu-maple filling is optional, but it adds a special touch.

All you need to make this addictive snack are six simple ingredients and about 20 minutes. Before being roasted, the seeds are tossed with cinnamon, ginger, nutmeg, and cloves for a perfect fall flavor combo.