According to a New York Times survey, 71 percent of Americans think granola bars are healthy—but only 28 percent of nutrition experts agree.

Covering a number of common foods, the survey revealed a hard truth: when it comes to food, most of us just don’t know what “healthy” means. Here are a few more of the findings:

However, we can all agree on a few things. In the same survey, almost everyone labeled hamburgers and diet soda as junk food, and carrots, apples, and oranges as healthy. Interestingly, the foods that both nutritionists and the public vote healthiest have one thing in common: most of them are raw.

It’s a logical idea: if a food hasn’t been altered or processed, it must be wholesome. In fact, there’s an entire diet based on this principle. Raw foodists believe that cooking food totally kills the nutrients, so they limit their intake to uncooked fruits, vegetables, nuts and seeds, and sprouted grains. A typical raw dinner might be a big salad followed by a chia pudding. Here’s what you need to know about eating a raw diet, and. in case you want to give it a try—or even just incorporate a raw dish here and there—24 of our favorite healthy raw-food recipes.

What is a raw food diet?

A raw diet is exactly what it sounds like: you eat only uncooked foods. Meals can be warmed slightly, but generally must be kept under 118 degrees Fahrenheit. Most proponents follow a raw vegan diet of fruit, vegetables, nuts, seeds, and some sprouted grains. (Some offshoots also keep raw meat, eggs, and dairy on the menu, though the vegan route is far more popular).

Raw foodists believe that cooking food destroys some of its natural enzymes, compounds that trigger specific biochemical reactions within the body. While it’s true that our bodies need enzymes to work properly, we produce our own; the enzymes in an apple or zucchini won’t help us. Because plant enzymes target processes like photosynthesis and germination that only occur in plants, they aren’t at all useful to the human body. Plus, stomach acid essentially kills any live enzymes we do eat, so even if they were helpful, they wouldn’t stand a chance.

There are other factors at play, too. Some people believe that cooking food actually makes it toxic. According to raw food enthusiasts, eating cooked meat creates “toxic residue” such as uric acid and ammonia in the body—even cooked fruit supposedly causes the same problem.

Health benefits of a raw diet

In eating a raw diet, you cut out all processed food, refined sugar, and many forms of fat—all things that can help you lose weight.

Most raw foods are also high in vitamins, minerals, and fiber—all nutrients your body needs. Eating plenty of fruits and vegetables can also help lower your blood pressure, which may cut your risk of heart disease. Some studies also suggest that a diet rich in raw vegetables can reduce your risk of cancer.

Risks of a raw diet

First and foremost, following an entirely raw diet can put you at serious risk of malnutrition. Some essential nutrients, like vitamin B12, are only found naturally in animal products. Raw diets can be especially detrimental to children. Two parents actually faced aggravated manslaughter charges after their infant daughter died on a raw vegan diet (though they were eventually acquitted). Their four other children were also small and underweight for their age. Anyone on a raw diet should pay special attention to their intake of essential nutrients, and talk to their doctor about supplementing with vitamins.

There are other long-term health consequences, too. One study of women who ate this way for several years found many stopped menstruating and became underweight. Research has also shown that people following a raw vegetarian diet have lower body mass indexes (BMI), body fat, and bone mass, putting them at risk for fractures. Going raw may be bad for dental health, too: the teeth of people on raw diets tend to exhibit more signs of erosion.

Eating uncooked food—even fruits and vegetables—also increases the likelihood of food poisoning. Bacteria thrive at room temperature, which is the way you’ll eat almost all of your meals on a raw diet. Symptoms include nausea, vomiting, diarrhea, cramps, fever, headache, and even damage to the kidneys and nervous system.

As with any diet, check with a doctor before trying to go raw to make sure it’s right for you.

Even if a 100-percent raw diet isn’t in the cards for you, eating raw for a meal here and there can still have some benefits. Test the waters with these 24 recipes for breakfast, lunch, dinner, and dessert. 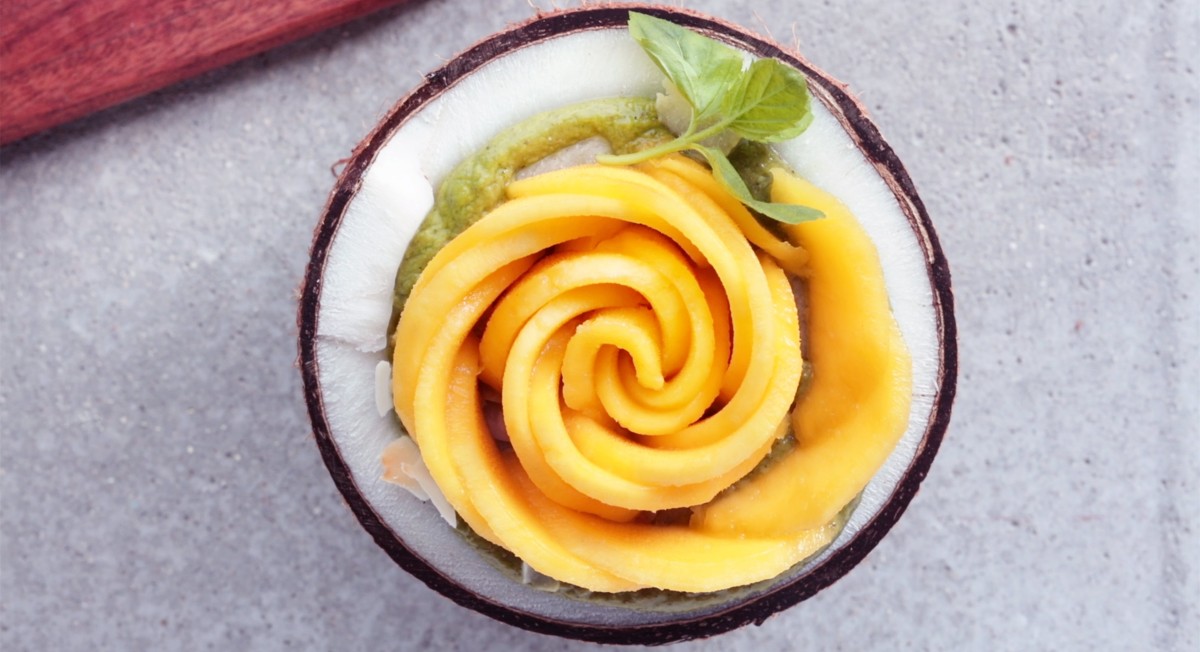 Wow your friends (and Instagram followers!) with a tropical green smoothie topped with a mango rose. Don’t worry, you don’t need any crazy knife skills to achieve it—just a little patience! Try serving the whole thing inside half a coconut for an even more stunning presentation.

No matter the weather, one sip of a coconut-filled smoothie will transport you to a secluded tropical beach. Plus, the skin-boosting nutrients in the carrot will leave your complexion glowing, as if you really did spend a day soaking up the sun.

Veggies have never tasted so sweet. Though the smoothie is packed with kale, spinach, and cucumber, pear keeps it fruity and ginger adds just enough of a kick. Toss in a spoonful of coconut oil before blending for extra energy.

This pale pink smoothie can win over even the pickiest of eaters. The strawberry, pomegranate, and banana flavor combo is a surefire crowd-pleaser—and the omega-packed hemp seeds hiding inside are barely detectable.

Your morning coffee might seem like decaf after a sip of this energizing smoothie. Cacao powder delivers a potent hit of caffeine, while almond butter and chia seeds add plenty of protein and omega-3s.

After a weekend of indulgence, hit the reset button with a rejuvenating blend of fresh cucumber and mint leaves, both of which help boost digestion (especially when paired with tart, fiber-rich green apples).

Think of this tropical smoothie as a lightened-up piña colada. There’s no alcohol or added sugar, but it’s packed with healthy fats, omega-3s, and vitamin C.

Beets, hailed in Ayurvedic medicine for their liver-cleansing properties, give this bowl a showstopping deep magenta hue. Pineapple and blueberries lend a touch of sweetness, and ginger adds a hint of spice.

Here’s a stunning treat with not one, not two, but five different layers. Three different types of ice-cold fruit smoothies offer a nice contrast to creamy chia pudding and tart mashed berries. With antioxidants from the berries and protein from the chia, it’s healthy enough for breakfast, yet indulgent enough for dessert.

Ultra smooth and creamy, cashew milk is the queen of non-dairy beverages. We’ve amped this recipe with the addition of medjool dates for sweetness and traditional chai spices. 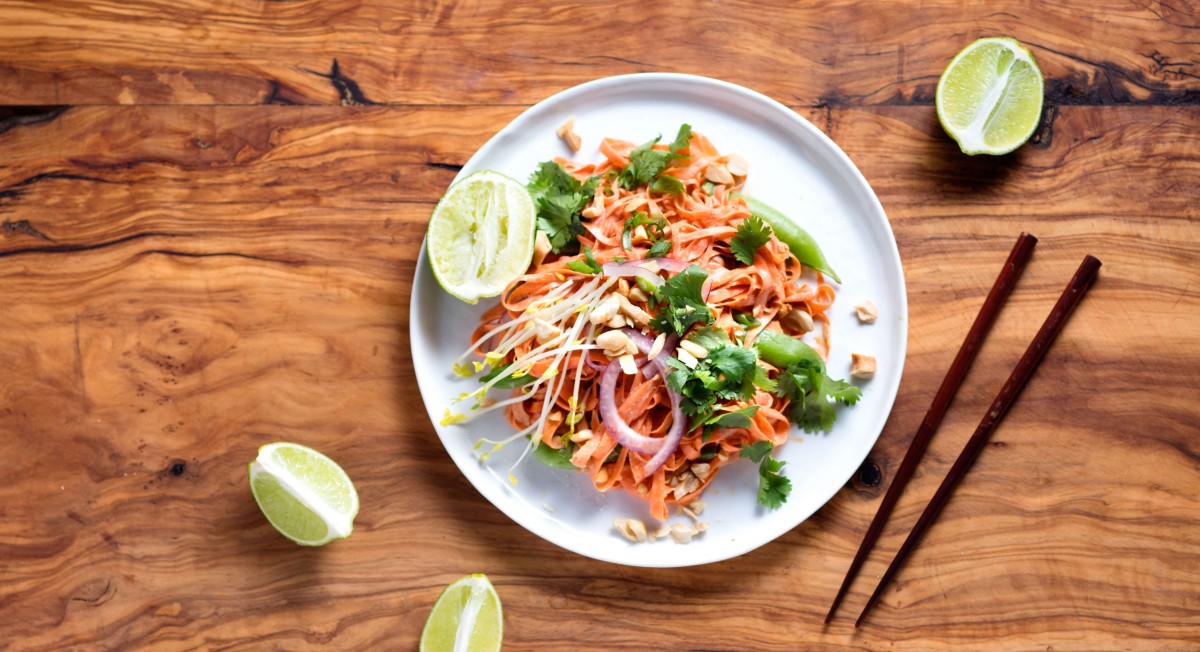 A salad of peppery watercress, tart grapefruit, and fresh herbs is just the thing for a light lunch. To make it more filling, slice a ripe avocado over the top and throw in an extra tablespoon of cashews.

Running the vegetable peeler over carrots creates long, thin ribbons that stand in for rice noodles for our raw take on pad thai. Tossed with a spicy and savory sauce made from almond butter, coconut aminos, ginger, and garlic, the flavor of the dish comes pretty close to the real thing!

As colorful as it is tasty, this veggie bowl brings together pretty much everything but the kitchen sink: carrots, tomato, cucumber, pea shoots, hemp seeds, cashews—plus a generous dollop of tahini sauce to finish the whole thing off.

Left raw, the delicate sweetness of fresh squash blossoms really shines. Pipe them full of raw “ricotta” made from pine nuts and nutritional yeast for an elegant appetizer your guests won’t forget any time soon.

Plain raw kale can be too fibrous and tough to chew. But massaging it with lemon juice and olive oil, as in Dr. Mark Hyman’s recipe, makes the leaves perfectly tender. Toss with garlic, pine nuts, and kalamata olives for a quick salad you’ll love for lunch and dinner.

Soaked and puréed almonds pair beautifully with the Mediterranean flavors of olive oil, tahini, garlic, and sage here. Try it with celery or carrot sticks for a vegan appetizer.

Watermelon and tomatoes have so much in common: they’re both red, juicy, and in season every July. Make the most of the summer’s bounty with a simple salad laced with mint and cayenne pepper.

Eating healthy doesn’t have to mean giving up your favorite foods—just tweak them to fit your new requirements. Soaked cashews give the finished dressing all the creaminess of buttermilk, while fresh parsley and chives add that classic ranch flavor. 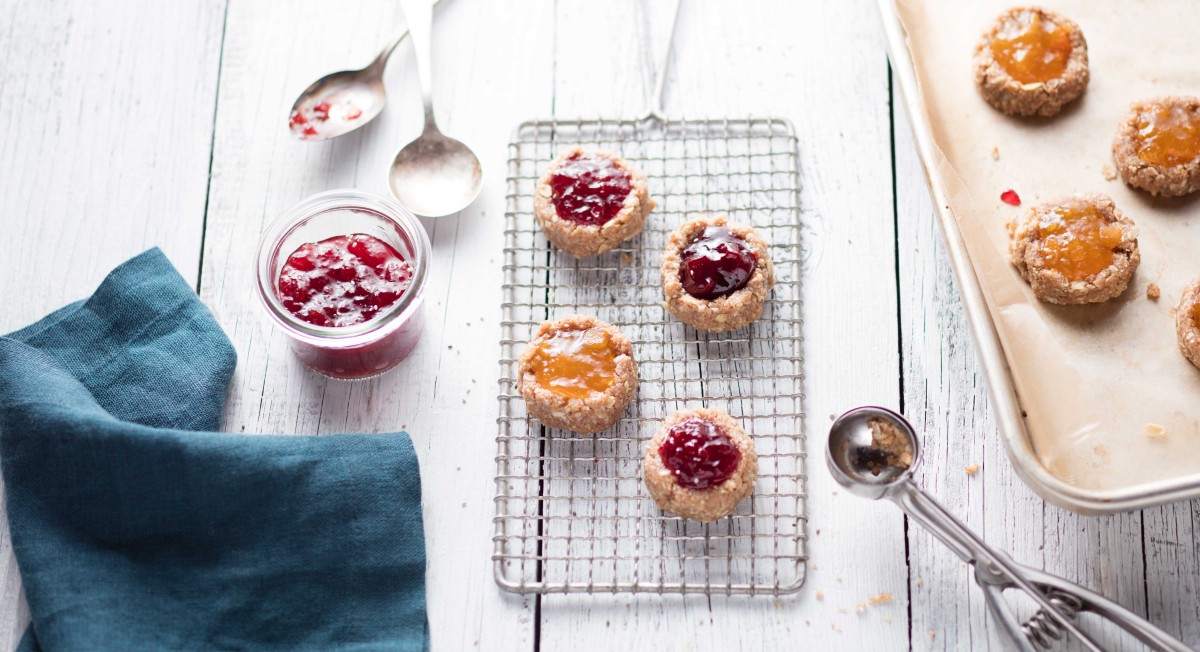 No dairy needed here—rich coconut milk whipped until thick and fluffy makes for an uber-creamy ice cream. Earthy matcha green tea adds a mellow sweetness that tastes beyond refreshing on a hot day.

Raw almonds and coconut have never tasted so good. Like the beloved Girl Scout cookie, our samoas are covered in coconut caramel and drizzled with chocolate. The only difference: we left out the highly processed ingredients and swapped in almonds, dates, and shredded coconut.

Spicy ginger and zesty orange lighten up the decadent cacao flavor of these easy raw truffles. Since they get their sweetness from medjool dates, they’re healthy enough to pop as a mid-afternoon snack.

We reimagined classic jam-filled cookies as raw, no-bake treats by exchanging the butter and flour for rolled oats, almonds, and coconut oil, and letting them set up in the fridge. Between the crumbly texture and sweet fruit filling, they’re just as satisfying as real thing.

Make your own ice cream sundaes with a scoop of raw, coconut milk ice cream drizzled with date caramel, and if you’re feeling extra fancy, some cacao nibs sprinkled over top. The result is seriously dreamy.

Think banana cream pie and chocolate mousse rolled into one mouthwatering dessert. Chia seeds are the hero ingredient here, both in the tapioca-like pudding and fluffy mousse. A layer of banana purée in the middle brings it all together.

Craving ice cream? Bust out the blender for a vanilla, chocolate, and strawberry smoothie. It has all the flavor of the classic childhood dessert, but none of the dairy or refined sugar.